Getting started is easy. The following example is to get the top 10 at the realtime chart of iChart.

If you're using Python 3.7+'s type hinting feature, the type used for the return type of the chart can be imported from the instiz.models module.

I recently started contributing to /r/kpop as a technical moderator. A glance on the organization may show that it's quite unusual for a Reddit community to use this much code, but it really helped the moderator's job, and provide value-addition to the users of the community.

The subreddit has a real-time charting widget of the songs, which was scraped from iChart hourly. 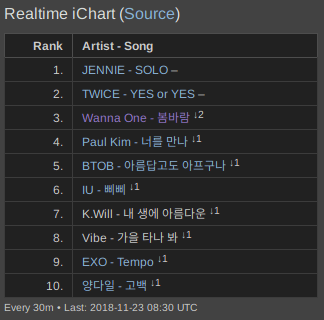 However, as Reddit pushes the redesign, a port of the widget to the redesign is required, so that there is no function disparity between users of the old site and the new site. And so, I started the porting attempt. However, a glance of the source code of the currently-running widget reveals a horribly nested mess. Not only that, the scraper and parser are coupled tightly to the actual updating function.

instiz is initially created to provide separation of concern between scraping process and widget update process. It can also be used for any kind of scripts, bots, or any programs that utilizes iChart's data.

Even though the main functionality of instiz is fairly straightforward, which is to scrape and process the data from iChart, there are some noteworthy additional features inside it.

On iChart's site, artist names are inconsistently formatted. Examples include 제니 (JENNIE), TWICE (트와이스), 아이유(IU), and Queen(퀸). instiz ensures that Korean and English names are pre-processed and can be retrieved easily by the library's user, without the need of additional processing.

A refresh function is provided, so that developer doesn't have to initialize a new instance of the class each time a new set of data is needed.

Thank you for reading this post all the way to the bottom. I really appreciate it. Have a good day.

7 Awesome Python Libraries To Play With 🕺

Messaging and Madness: Sending Messages with AMQP and Amazon MQ