Who would have thought that Microsoft would make .NET development actually great outside of Windows!

I have the need to use these tools because of a subject I'm currently taking in college that requires me to do an ASP.NET MVC web application with Entity Framework and a few more fancy acronyms.

So, today I'll be going over the steps I took to get things started.

Before we start printing Hello World left and right, we gotta install a few tools:

In order to verify that everything went well, go ahead and execute the following commands in your Terminal:

Since we don't currently have the Microsoft SQL Server engine available for MacOS, I had to use Docker in order to install Linux's MS SQL Server in a container and although this may sound complicated at first, there's a really awesome post written by @reverentgeek that can teach you exactly how to do it and even more! 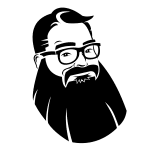 SQL Server Running on a Mac?!

To editor or not to editor

Over on the Tools section I mentioned you could either use VS Code or Rider, so feel free to use which ever you prefer.

In case you go with VS Code, you will have to install the C# language extension and you are good to go.

I personally prefer using Rider because of my familiarity with IntelliJ based IDEs in terms of functionality and keyboard shortcuts overall. But for the sake of this post, I'll be going through the steps of using VS Code since it's the one recommended in the .NET Core website.

In order to start a project, the .NET Core SDK provides you with a few handy commands you can use in your Terminal.

To create a project, navigate to a folder of your preference by using the cd <folder-name> command, like:

Then create a folder by using the mkdir <folder-name> command:

Then navigate to it with:

Note: there's an important detail about this, if you use the next command to create a .NET Core project, it will be named just like the folder you are currenlty on, in this case "CoreIsAwesome".

Now we can generate a sample Console Application by using this:

And you should quickly see something like this show up in your Terminal:

Now you should be able to see all your project's files in the Explorer panel.

If you select a file, let's say the Program.cs you should have the following code:

And in a few seconds or so, VS Code should display a dialog like this:

Now, if you go over to the Debug panel, your Run Configuration should now be like this:

Which means we can go ahead and run our code!

Hit that green Play button while crossing your fingers so you don't get any errors.

Wait a few seconds until the build finishes... 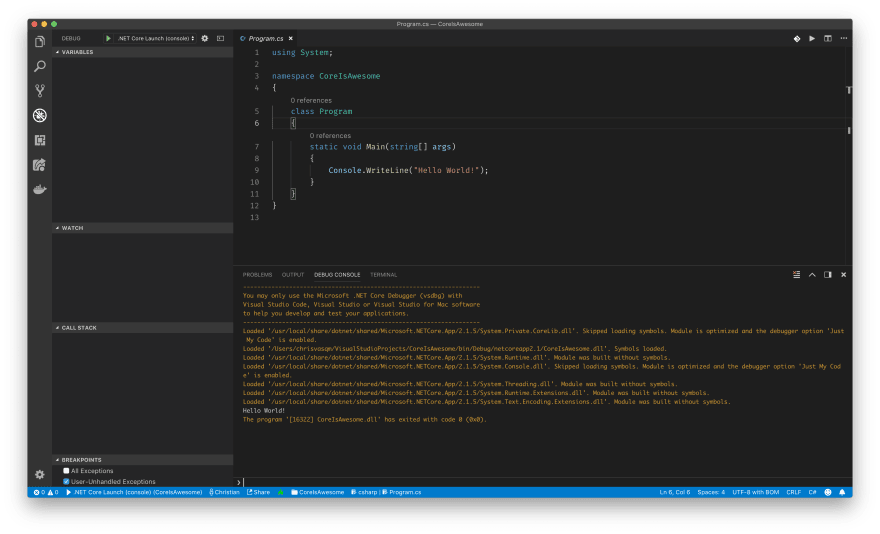 If you zoom in or squeeze your eyes hard enough, you should be able to see that tiny little "Hello World!" in the Debug Console.

In my particular case, the only difference is that instead of doing:

To have a .NET Core MVC template generated for me and then I had to set up Entity Framework Core dependencies in my project and so on, but that might be a topic for another post ;)

Tip: In case you might be curious about what other templates the dotnet new command can generate for you, use the following command:

And that should give you all the instructions you need.

A solution for Monitoring and Logging Containers

Use Keycloak as Identity Provider from Blazor WebAssembly (WASM) applications

Christian Vasquez
Un simple mortal
Why I Decided to Invest in My Portfolio as a Junior Developer
#webdev #career #codenewbie #help
What was your win this week?
#discuss #weeklyretro
10 of the coolest developer T-shirts from devshirt.club
#watercooler #codenewbie #career #writing

Once suspended, chrisvasqm will not be able to comment or publish posts until their suspension is removed.

Once unsuspended, chrisvasqm will be able to comment and publish posts again.

Once unpublished, all posts by chrisvasqm will become hidden and only accessible to themselves.

If chrisvasqm is not suspended, they can still re-publish their posts from their dashboard.

Once unpublished, this post will become invisible to the public and only accessible to Christian Vasquez.

Thanks for keeping DEV Community 👩‍💻👨‍💻 safe. Here is what you can do to flag chrisvasqm:

Unflagging chrisvasqm will restore default visibility to their posts.