Redux Toolkit (which onwards, I will refer to as RTK) is a massive improvement to the Redux ecosystem. RTK changes the way we approach writing Redux logic and is well known for cutting off all the boilerplate code Redux requires.

I’ve enjoyed playing around with this library for the last couple of days, but recently, I found myself in an unpleasant situation. All my Redux logic, including asynchronous calls to APIs, was packed down into one slice file (more about slices in a bit).

Albeit this being the way RTK suggests we structure our slices, the file starts to become hard to navigate as the application grows and eventually becomes an eyesore to look at.

This post isn’t an introductory guide on how to use RTK or Redux in general, however, I’ve done my bit to explain the little nuances that make RTK what it is.

A little understanding of state management in React is enough to help you wring some value from this post. You can always visit the docs to expand your knowledge.

The term slice will be an unfamiliar word for the uninitiated so I’ll briefly explain what it is. In RTK, a slice is a function that holds the state eventually passed to your Redux store. In a slice, reducer functions used to manipulate state are defined and exported to be made accessible by any component in your app.

A slice contains the following data:

Basic overview of a slice

In a nutshell, the slice file is the powerhouse of an RTK application. Let’s move on to create a new React application with RTK included by running the following command

On opening your app in a code editor, you’ll notice that this template has a slightly different folder structure compared to that of create-react-app. 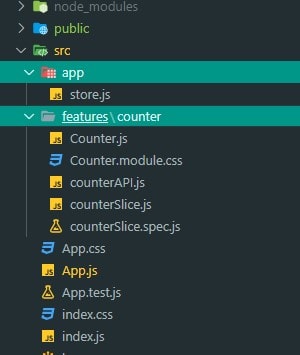 Each subfolder in the features folder represents a specific functionality in the RTK application which houses the slice file, the component which makes use of the slice and any other files you may include here e.g. styling files.

This generated template also includes a sample counter component which is meant to show you the basics of setting up a functional Redux store with RTK and how to dispatch actions to this store from components.

With the way RTK has structured the app, each feature is completely isolated making it easy to locate newly added features in one directory.

As I previously mentioned, you will notice that all the logic needed to handle the state for the counter component is consolidated into this single file. The asynchronous calls made using createAsyncThunk, the createSlice function and the extraReducers property are all present.

As your application grows, you will continue to make more asynchronous requests to your backend API and in turn, have to handle all the possible states of that request to ensure that nothing unexpected breaks your application.

In RTK, the three possible states of a request are:

Keep in mind that handling one of these cases takes, at least, 3 lines of code. So that’s a minimum of 9 lines for one asynchronous request.

Imagine how difficult it would be to navigate the file when you have about 10+ asynchronous requests. It’s a nightmare I don’t even want to have.

The best way to improve the readability of your slice files would be to delegate all your asynchronous requests to a separate file and import them into the slice file to handle each state of the request.

I like to name this file using ‘thunk’ as a suffix in the same way slice files use 'slice’ as their suffix.

To demonstrate this, I’ve added a new feature to the app which interacts with the GitHub API. Below is the current structure

For more info on how to use createAsyncThunk, reference the docs.

I admit the extraReducers property still looks a bit clunky but we’re better off doing it this way. Fortunately, this is similar to the way logic is separated in a normal Redux application with the action and reducer folders.

ADDING SLICE TO THE STORE

Every slice you create must be added to your Redux store so you can gain access to its contents. You can achieve this by adding the github slice to App/store.js.

Another thing to take into consideration is how requests are handled in extraReducers. In the sample slice file, counterSlice, you’ll notice a different syntax is used to handle the requests.

In githubSlice, I’ve used the map-object notation in extraReducers to handle my requests mainly because this approach looks tidier and is easier to write.

The recommended way to handle requests is the builder callback as shown in the sample counterSlice.js file. This approach is recommended as it has better TypeScript support (and thus, IDE autocomplete even for JavaScript users). This builder notation is also the only way to add matcher reducers and default case reducers to your slice.

At this point, you may have noticed the contrast in the way state is being modified in RTK compared to how it's done in a normal Redux app or React’s Context API.

RTK doesn’t mutate the state because it uses the Immer library internally to ensure your state isn’t mutated. Immer detects changes to a “draft state” and produces a brand new immutable state based on your changes.

With this, we can avoid the traditional method of making a copy of the state first before modifying that copy to add new data. Learn more about writing immutable code with Immer here.

With the aid of two important hooks; useSelector and useDispatch from another library called react-redux, you will be able to dispatch the actions you’ve created in your slice file from any component.

Install react-redux with this command

When the request is fulfilled, your Redux store gets populated with data

Redux Toolkit is undeniably an awesome library. With all the measures they took and how simple it is to use, it shows how focused it is on developer experience and I honestly believe RTK should be the only way Redux is written.

RTK also hasn’t stopped here. Their team has gone further to make RTK Query, a library built to facilitate caching and fetching data in Redux applications. It's only a matter of time before RTK becomes the status quo for writing Redux.

What do you think about this approach and RTK in general? I’d be happy to receive some feedback! 😄