Get ready for Voyage 30 — There’s still time to join!

🏄‍♂️ Voyage 30 starts on May 3! Sign-up today to transform what you’ve learned into the experience needed to boost your Developer career.

⛵️ Voyage 29 starts Sprint 3 started this week. Teams have established a routine and cadence as they continue to develop their web applications.

🚀 Voyage 28 completion certificates were distributed this past weekend. Checkout this example of what one team created!

🎉 Congratulations the the following Chingus for reaching milestones in their Web Development careers!!!

“TIL that I need to disable adblocker whenever I test cookies. Long story short, I got a task that said some script setting cookies weren’t being blocked. It was blocked just fine for me… Turns out my adblocker blocked it, not our software. Dumb way to waste 3 hours.”

“Does someone know how I can use something like splice on immutableJS? Say I have a dynamic list of up to 10 items, but I always want to cut down to 5”

“ I am teaching my self about discord bots and how to build them. So far I have created a sever and a bot and the bot is able to reply to a hello and a couple more things. So far this has been a fun learning it and finally getting to node.”

“Does anyone know of a course/book with a practical approach to machine learning? something you would use for fun to build a project during the weekend rather than learning all the theory behind?”

“Not sure how I didn’t know this one… but if you’re using bind(this) on your event listener function (within the addEventListener function), the signature will be unique...so this will not work.”

“I worked outdoors this afternoon. I needed time away from the keyboard!”

“Yesterday I learned if you want to convert a number from base 10 to base n just continually divide the number by base n and string the remainders together in reverse order.”

Seven Mistakes To Avoid In Your Technical Interviews - Smashing Magazine

Quote of the Week 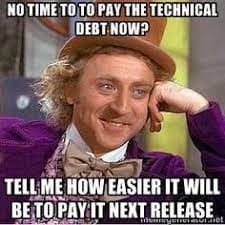 In any project problems can be generally placed into two categories — big stuff and small stuff.

When you hit a big stuff problem you will usually create an issue to document what it is, where it lives in the project, and why it’s important. This gives you opportunity to discuss it during a standup meeting so it can be prioritized and a path to resolving it can be defined.

Unfortunately, when you encounter small stuff it’s too easy to say “I’ll get to his later.” or “I need to complete a higher priority task first.” As a result, all too often the small stuff is overlooked until it grows to become a _big stuff _problem.

Technical debt is when you allow a small stuff issue to grow into a big stuff catastrophe!

The morale of this story is when you hit small problems fix them immediately so they don’t become technical debt!

Chingu helps you to get out of “Tutorial Purgatory” by transforming what you’ve learned into experience. The experience to boost your Developer career and help you get jobs.