Late in the afternoon of May 24, 2021, Tessa Kriesel was informed by her leadership at Fast that the team she was hired to lead, DevRel (Developer Relations), would own Documentation. The day was wrapping up, and Tessa would follow up with direction for the direction for said documentation on the next working day.

Before she had the chance to do that, she was invited to a meeting by a male coworker for a meeting she should have been giving the autonomy to organize. This meeting was scheduled for the following day, outside of her agreed-upon working hours. She was marked as optional. 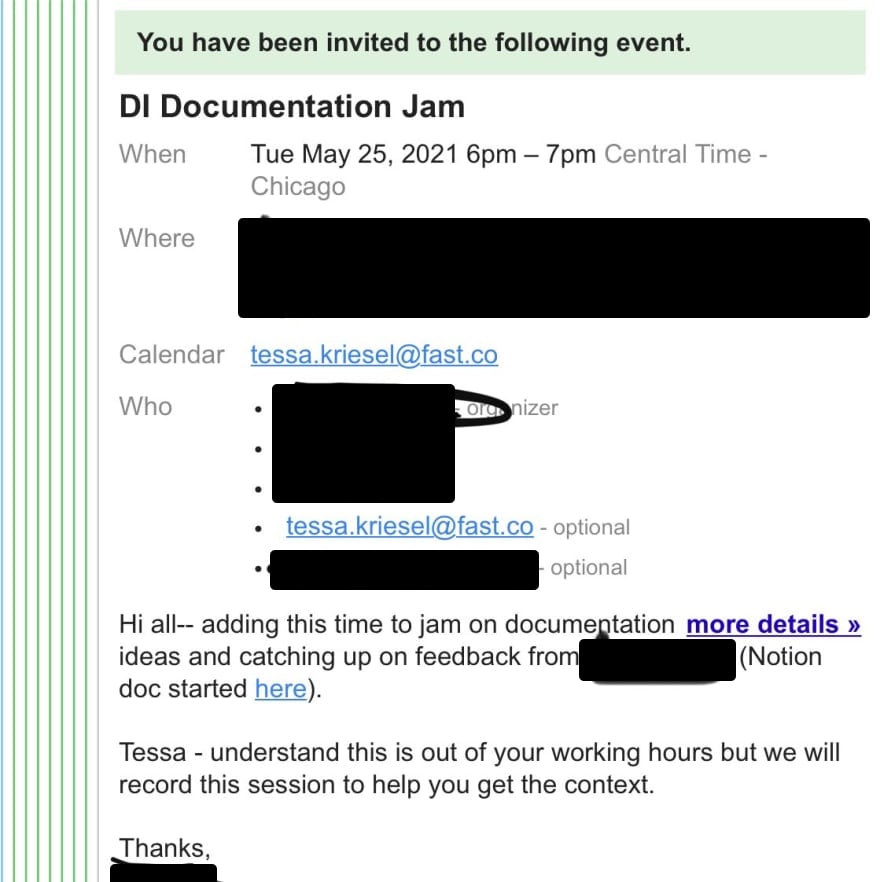 Tessa replied that she should not be optional on the meeting (after all, she was lead of the team that owned docs, her presence should be required, and encouraged by leadership). As a mom, it's often impossible to compete with colleagues who don't have the job of being the only or primary caregiver. It's not because people who primarily give care to their dependents aren't as dedicated, or are regularly unavailable during work hours, it's because many of their colleagues, in cut-throat competition, specifically work beyond normal expectations, including outside of business hours.

At a company like Fast, where this is encouraged and rewarded, it quickly turns into discrimination.

What followed was dismissing of her concerns, including being laughed at in an email thread by the colleagues attempting to move forward without her. 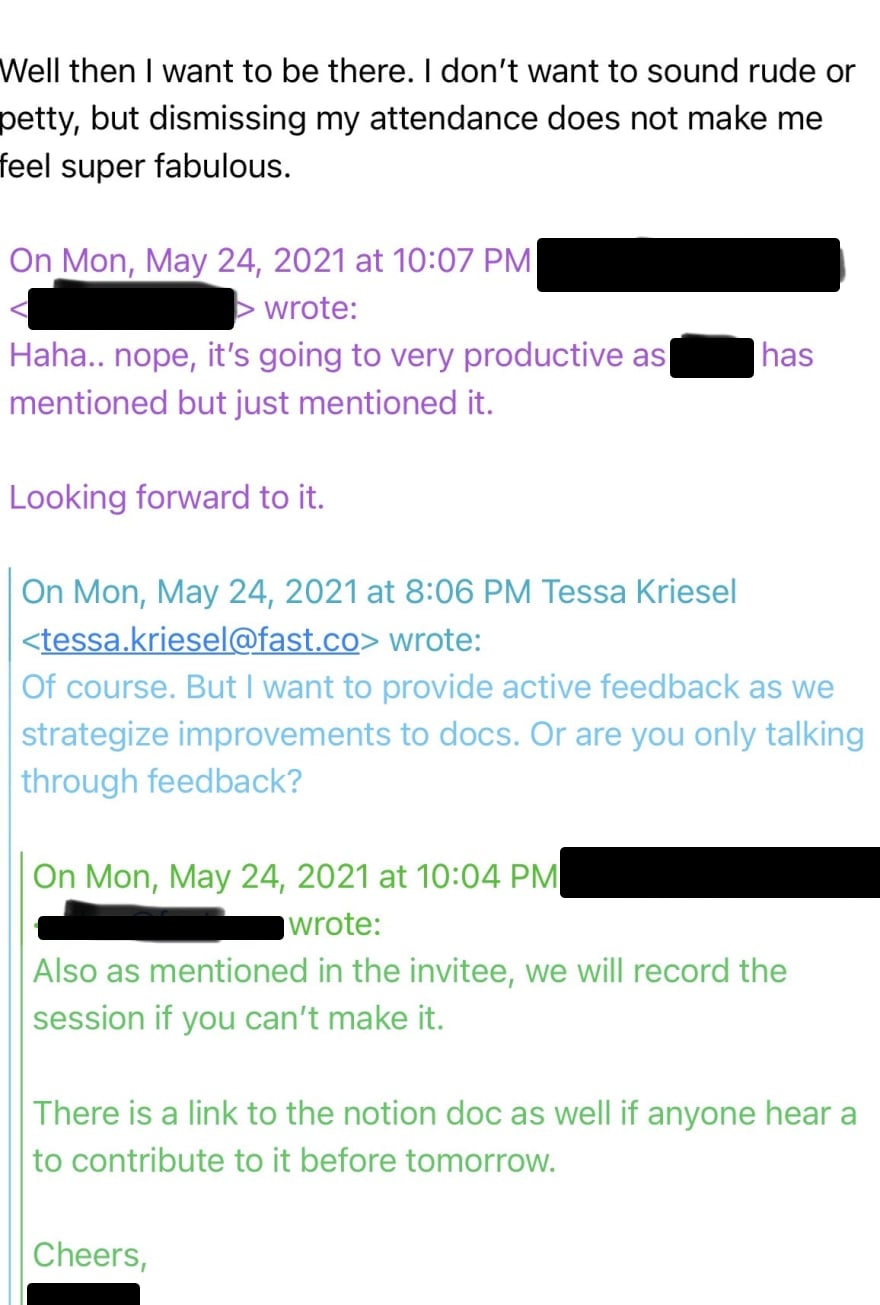 The next day, she went straight to her leadership about the toxic, hostile environment that she was working in. By 5pm on the day on May 25th, 2021 on the left coast, she was fired.

The CEO laughed at her.

She was presented an NDA (Non-Disparagement Agreement) and was offered $17,000 USD severance, which she struggled with turning down for financial reasons, but ultimately refused to accept.

Later that evening, she started tweeting about the hush money. Peter Grassi called her telling her to remove the tweets.

In 2017, I left a job that was a toxic work environment at World Wide Technology, Inc. Women around me were overlooked, no matter their tenure, while new developers, both to the company and the discipline, climbed the company in levels. One of the women I worked with had been there for 20 years.

One woman gave a talk on unconscious biases and the majority-male development work force snickered and scoffed for the majority of her presentation. Upon dispersing, I overheard my male colleagues discussing that they weren't real, that the discussion was confirmation bias for what could easily be explained by women's lack of interest and "different biological traits" that made them less likely to be developers. Mind you, this was before the James Damore memo.

We had a meeting everyday at 9:00am. Stand-up. It's that morning meeting where everyone stands in a circle and shares their status update. Fine.

The problem is that my commute made it difficult for me to be at the office at 9:00am. I lived 30 miles from the office, and if there was any traffic, it was impossible for me to get there before 9:30am. Why? My daughter's school started at 8:30am. I asked for the meeting to be pushed back because of this, despite that I would call into the meeting when I was stuck in traffic.

We moved the meeting to 9:15am, and I had to call into the meeting less often, but again, it still happened 1-2 times a week due to the traffic. On these days, I was always the last one to leave, as my daughter participated in an after school program. As long as I left by 5:30pm, I could get to her. I also often ate lunch at my desk, continuing to work. I rarely took breaks unless I had an emergency with my daughter.

Eventually, I was presented with a PIP (Performance Improvement Plan). We had just been given a "work from home day" the week before, as a company, and the stipulations included both that I arrive at 8:30am (which was 30 minutes before the office's working hours, and obviously outside of my availability) and that I wasn't allowed to work from home. The deal was I sign, or I quit. I refused to sign it, as it was discriminatory. They already had an NDA ready for me to sign that gave me one month's pay (~$3,000).

The threat of lawsuit also terrified me. I couldn't afford a lawyer, nor did I have the breadth of knowledge or network to inform me that I had a case against WWT, not the other way around.

I ended up filing for unemployment, as it took me a few months to find a new job. WWT fought it, and I made the case with unemployment that they forced me into quitting with a discriminatory PIP. They agreed. WWT had to pay my unemployment. I should have realized then that they had intimidated me against standing up for myself. Bullied me with money I desperately needed to go against my own interests, and the interests of other parents, and especially women, in our industry.

I know it's not just Tessa and I.

Once suspended, cher will not be able to comment or publish posts until their suspension is removed.

Once unsuspended, cher will be able to comment and publish posts again.

Once unpublished, all posts by cher will become hidden and only accessible to themselves.

If cher is not suspended, they can still re-publish their posts from their dashboard.

Once unpublished, this post will become invisible to the public and only accessible to Cher.

Thanks for keeping DEV Community 👩‍💻👨‍💻 safe. Here is what you can do to flag cher:

Unflagging cher will restore default visibility to their posts.