There's a good chance you've heard about Containers. They are very popular these days, and for change it comes with great documentation.
There are good articles and tutorials covers the foundations, what are containers and their components (images, containers, Dockerfile, etc). There are also step-by-step tutorials that help you to start out with Docker.
When I thought how am I gonna use it, I looked for a workflow. I scratched my head and thought:

How can I automate the process of build and deploy of (almost) any app in a container?

In this post, I talk about the workflow I came up with for my use-case.
One that is automated, easy to modify, re-build and deploy on new or existing container instances.
I had a task to dockerize a third-party application, not a common one, that doesn't have an existing image on DockerHub. This is my first post experimenting with Docker.

I assume you are familiar with Docker concepts of Dockerfile, images and containers (if not, this is a great place to start) and Ansible.

I had a task to deploy a third party app that monitors our production network. It's a small distributed app, which works with master and slaves. I won't get into detail of the app (because this is out of scope for this article).
This was the first docker project I did, so I had to develop the infrastructure too.

What do I mean by develop an infrastructure for Docker?

I need to define the process first, then abstract it, so I can re-use as many parts as possible.
This would allow me to add new dockerized apps faster, build and deploy them with minimum additional code and more important - no duplicate code. Now is great time to define such process, because this is my first Docker project.

Here is a decipt that define the process I want to implement.
As I said in the introduction, I'm not going to cover the basics in this post. However, I'll describe and explain each component in the process and some of it is considered basic. 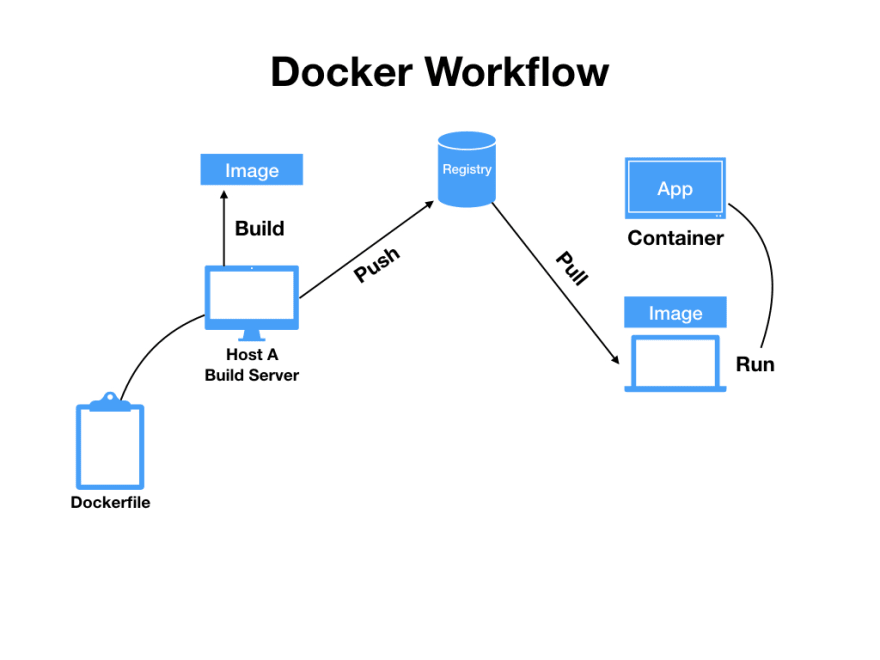 For more info about concepts above, check the Docker Get-Started link.

Once we have the image available locally, we can run an instance of it.

The syntax is: docker run [ OPTS ] <IMAGE:TAG> [ CONTAINER_NAME ]. There are many useful options, such as volumes and port mapping.

Before I describe the automation infrastructure and process, what are the advantages of using Containers anyway?
Here are the pros I wrote down for myself:

The points made are from Ops point-of-view. There are more advantages (and disadvantages) when developing an App using containers.

To create an automated process, we need to define such. Let's define concrete process, for building and deploying new images.

The role of the builder is implicit - to build images. Altough docker images can be built anywhere (on dev machine for example), I find it better to do it on a Build Server. Why?

Jenkins is perfect for this task.

I created a new Job, which simply builds Dockerfile's and tags them automatically. I do that by using a Makefile to build the image and push it to our registry.

Why do I use a Makefile? Well, I made an abstract Makefile. This allows me to build ANY Dockerfile. I provide it with a name and tag for the image. It then builds, tags and pushes the new image to our registry in a single process.

This section defines how am I pulling an image and run a container on an instance.

We use Ansible to manage our infrastructure. It has a great module for Docker. I'm pretty sure any IaaC has Docker module that makes your life easier.
Deployment of a new image is made with a single task, that takes care for everything - pulling new images, spin up new containers and provide specific container options.

I create a new Ansible role, that prepare the Docker host. It generates the directories and copy relevant files. The responsibility of the role is to make the host ready to run the container instance. Note that the steps here are probably different depending on the App we want to deploy.

Since I let Ansible manage the configuration, and Docker to actually run the App, I have a short Ansible playbook that is clean and very easy to manage. Prior to that, I used to define much larger playbooks to prepare everything and deploy the App.

Using my new playbook, I can instantiate a container on any machine with docker engine in seconds. Ansible and Docker will get the job done.

That's the workflow I ended up with. I think it is simple, and convinient to dockerize new Apps now that I have the right tools and infrastructure.
Before that I had used Ansible playbooks and roles to build and deplpoy new apps. Most of the time it worked as expected, but sometimes things broke. It usually depends on the platform. Something that works on Ubuntu 14, not always works on Ubuntu 18 without modifications. Sometimes a driver is missing, or a package dependency. Or it is something else.
These pitfalls can't happen with Containers, since everything the app needs is inside the container.

To deploy a new App, these are my steps:

If you haven't tried out using containers yet, I really encourage you to put the time and learn this technology. They are great. It is a great tool in your toolbox and it's easy to try it out.

Some great resources are this blog post, and this tutorial. Just try and play around with it.

Do you have a different workflow you foster? Feel free to share.

On another note, this is the first blog post I publish. Any feedback would be appreciated.

I'm devopser with passion to code. Everyday is an opportunity to learn something new.

Daily Is Now More Secured Than Ever

Chen
I'm devopser with passion to code. Everyday is an opportunity to learn something new.
SRE in layman’s terms (4 core concepts)
#sre #devops #engineering #beginners
How to run your own docker registry with password, SSL and S3 backend
#docker #devops