So I've been developing a bunch of tools to help people with disabilities use the web hands-free through computer vision. The idea is that people can use head tracking to control a mouse on the screen, and by using JavaScript you can build tools that anyone can use on any device without downloads.

However, head tracking only works if you're able to point a camera at your face which isn't always possible or practical. So I started thinking about using gyroscopes as a way to move a mouse.

The first idea I had was to use the phone as a sort of "marble maze platform", where tilting the phone moves a cursor on the screen like a marble, like those old school marble maze toys: 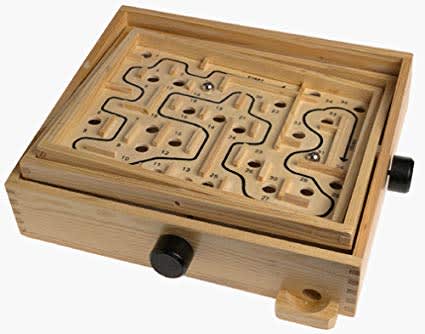 But when I had this idea it was May 4th, and since I'm a fan of Star Wars I wanted to experiment with using Gyro's to control a lightsaber on the screen as a fun way to practice using the API.

The API definitely works really well so I'm very eager to start experimenting with it for accessibility purposes. However, I wanted to share my demo which I've released as a starter kit on Glitch.

Instead of finishing my app, I turned it into a starter kit that's ready for you to make exciting games and experiences!

I added a free Firebase API key for you to try with, but I recommend creating your own. It's super quick to do and all you have to do is replace the values at the bottom of index.html with your own (do a document search for "Initialize Firebase")

Let me know if you need any help setting up etc. I don't write many how-to's so I never know how much info to put 😅

Oz Ramos
OMG I love working on side projects 🎉 Currently focused on #100DaysofCode to put them together into a portfolio so that I can join a team as a frontend dev!
How I made Flappy Pose, Flappy Bird but where you flap with your arms
#javascript #computervision #game #tutorial
How to start and stop videos from a distance with your hand ✋
#tutorial #computervision #javascript #handsfreejs
Face Painting with P5.js
#tutorial #javascript #handsfreejs #creative