Interior mutability provides the ability to mutate the value even in case of immutable reference.

There is no legal way to convert the &T(exclusive reference) to the &mut T(mutable reference) and this is called undefined behavior.
But we have UnsafeCell which helps to cope with the immutability constraint of &T, and provides a shared reference &UnsafeCell which points to the value to be mutated called Interior mutability.

UnsafeCell
It is the building block of interior mutability. It is used to eliminate some Rust optimizations that assume exclusive mutable access (or aliasing) inside the cell. 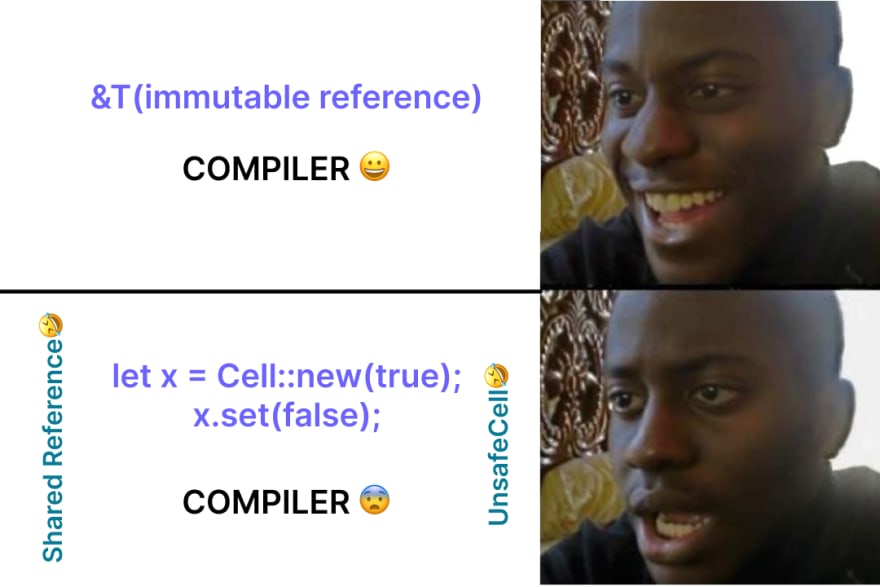 It abstraction over the UnsafeCell (which is unsafe in nature), So it is unsafe, but taking some measures when we ensure the safety.

It is not suitable for vec, String, or anything that stores data in heap memory as it is expensive to use Copy trait.

Why to use Cell?

Why to use UnsafeCell with Cell?

If we try to mutate the value directly through the shared pointer without unsafeCell then it will always result in undefined behaviour because the compiler may try to optimize based on the current assumption that the pointer isn't shared, which would be invalid if it was shared.

It can be done using the UnsafeCell if you know it was truly not shared (even on the same thread), because that prevents some of those optimizations such is it safe to cache when we have &selfand when you have &mut self it makes sure that no two &mut T never points to same T.

How to mutate in Rust

So what does shareable mutable reference means?

It means we have shared references(i.e &T type) but with the extra power to mutate in a controlled manner.

How do shared references allow mutation?

Interior mutability types which uses the shared references let you do because they maintain additional, special-case invariants that the compiler cannot check, that ensure that no conflicts arise even if you modify through a shared reference. There are lots of ways to do so with the help of CPU atomics, Mutexes, Cell, RefCell, etc.

How to ensure that we are using it in a controlled manner?

Cell must not implement the Sync trait as it enables the usage of sharing references across threads which can result in adverse conditions as they can try to overwrite the value at the same time which leads to corrupted results.

Base code to understand the explanation

Let's implement some changes in the code to understand the working.

Arc is used to share the reference between the threads.

In the above code, we are spawning two threads and they are simultaneously mutating the value of x in each iteration 0 to 1000000.

Why does the assertion fail?

Instead, of getting 2000000, we get only 1170776. Because one or another thread read the old value of x and incremented and set it to a new value obtained.

2. The get method must implement the Copy trait which will give the cloned value, not the exclusive reference to it. If we don't use the Copy trait, then what happens?

Let's try to understand by code

Returning the pointer to the value inside the Cell

We have something in Cell and let it assign to a variable x then store the reference to y by making some change in get method. Then we try to change the value by set method.

Now, if we try to access the y. It should fail because once we set a new value, then the previous memory must be released.

⇒ If the test doesn't fail, it might be because the system might not free the memory instantly.

Special shoutout to Jon Gjengset
. It inspires me to write simple cron scheduler.

Feel free to ask queries. You can connect to me on [LinkedIn].(https://www.linkedin.com/in/chaudharypraveen98/)

Once suspended, chaudharypraveen98 will not be able to comment or publish posts until their suspension is removed.

Once unsuspended, chaudharypraveen98 will be able to comment and publish posts again.

Once unpublished, all posts by chaudharypraveen98 will become hidden and only accessible to themselves.

If chaudharypraveen98 is not suspended, they can still re-publish their posts from their dashboard.

Once unpublished, this post will become invisible to the public and only accessible to Praveen Chaudhary.

Thanks for keeping DEV Community 👩‍💻👨‍💻 safe. Here is what you can do to flag chaudharypraveen98:

Unflagging chaudharypraveen98 will restore default visibility to their posts.