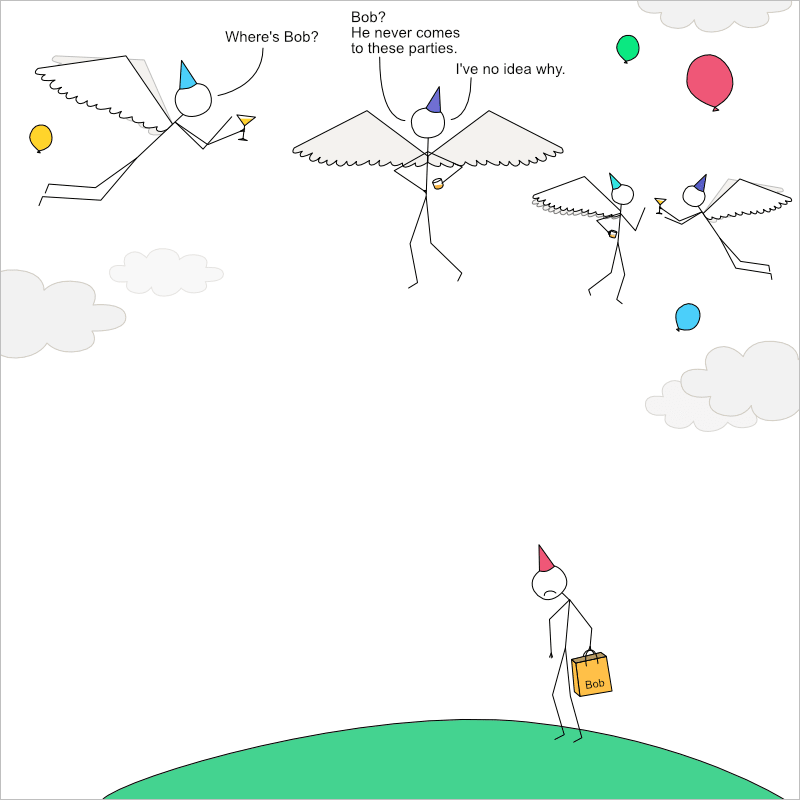 There are no persons with disabilities: there are only disabled persons. And the question we should be asking is: who disabled us?

The answer is: we did.

I have a limitation that might be considered a disability. I cannot fly.

Fortunately, neither can anyone else I know, so we have built an environment predicated on this idea that humans can’t fly. We provide various prosthetics on a nearly universal basis to compensate for this limitation, hence it is merely a limitation, not a disability. Being unable to fly does not materially affect my ability to live a productive and happy life. My flightlessness does not make me less human.

What prosthetics are these of which I speak? Why, ladders, stairs, elevators, escalators, balloons, airplanes, helicopters, and more. Ironically, in creating prosthetics to compensate for our natural limitations, we inadvertently—I’m giving us the benefit of the doubt here—invented disabilities. For example, when we created stairs, we falsely assumed that anyone and everyone could climb them.

In so doing, we split humanity into two groups, whether knowingly or not. One group is the “normal” group and the other group is the “abnormal” group. And then we decided that in building our cities and our society, we needed only to serve the “normal” group. So, in creating stairs, the needs of those of us whose abilities do not include stairclimbing were considered irrelevant. At best, second-class facilities might be added, usually as an afterthought, to assuage a guilty conscience or silence a demand. Just use the service entrance, OK?

“Separate but (un)equal” has largely been the rule since humans first noticed that some of us were unfairly excluded. For much of history, the excluded were simply rendered invisible, often hidden away at home. Mentioned sotto voce, if at all.

As with the once and future separate and (un)equal treatment of people of color, this practice is a form of bigotry. Those who don’t fit into our concept of “normal” are effectively dehumanized.

Humans are born with abilities, not dis-abilities. What could a dis-ability even mean? For there to be an absence of an ability, we must first assume that the ability is the norm. No one considers our lack of ability to fly, or to see x-rays, or to be impervious to bullets, or to read minds, as a disability, despite our invention of airplanes, x-ray machines, armor, and language as prosthetics to compensate for these “missing” abilities.

For a human to become dis-abled requires other humans to build a society with the presumption that everyone has a given ability. Everyone who counts, that is. Those who do not have this ability are rendered invisible—not part of humanity. They simply don’t count.

Sadly, we continue to create new disabilities day in and day out. Then we tell ourselves that providing prosthetics to those who lack these abilities is troublesome and expensive—an added cost. A burden. But this is only true because we designed our world with disregard for the variation in human abilities across the entire population. We began with a caste system in mind in which only the needs of that caste having a common ability were taken into account.

We've lopped off your arm, but don't worry, we'll sew three fingers back on the stump and congratulate ourselves for our great philanthropy.

No one wants to be second class

Alfred Bester’s brilliant first novel, The Demolished Man, envisions a society in which some but not all humans have varying degrees of telepathic ability. Interestingly, this telepathic ability is not seen as the norm, but as problematic, hence strict laws have been created to regulate and limit the telepaths and to protect the privacy of non-telepathic individuals, along with a telepath guild intended to instill a professional ethic and to enforce good behavior.

Bester’s book is worth reading if you’re among the temporarily-able-bodied and you want to get a feel for what it’s like to be disenfranchised by your abilities or lack thereof.

Disabilities are culturally and socially created whenever we divide ourselves into separate groups and value only the needs and abilities of one such group. The current worldwide protests around the death of George Floyd are a cry of anguish from and for a disenfranchised group: for human beings whose needs—and rights—have been disregarded and treated as disposable.

In much of the world, having a high melanin content in your skin is a disability. It makes it much more difficult to get a job, to get paid fairly according to one’s contribution, to get health care, to gain protection from the police rather than being assaulted by them.

Having two X chromosomes has also been a reason to disable humans throughout the world. This has been true since the time of Pandora if not much earlier.

Similarly, age, body shape and size, “attractiveness” according to the norms of a particular caste, intelligence as defined by the dominant caste, economic status, and more all form the bases of culturally-created disabilities. There is nothing naturally dis-abling about any of these states of being—until such disabilities are created by us.

There is no they, only a disparate we

The solution to this problem does not lie in strengthening the lines between these artificially created castes and then striving to treat each caste equally—an impossibility as castes will always compete and the game is viewed as zero-sum. As long as “they” exist, it will forever be Us vs. Them.

The solution is to erase these lines and to re-integrate humanity into a single whole comprised of individual humans with a fantastic variety of strengths and weaknesses, and then to design our world to take full advantage of the wide panoply of human ability without excluding anyone unnecessarily.

Let us stop thinking of some of us as persons with disabilities, as if these were somehow naturally occurring, and acknowledge that many of us are disabled persons—disabled quite deliberately by a society that sees some of us as human and others as less so.

Let us look at our systems and our built environment and admit that any system or environment that disadvantages some of us unfairly is broken. Then let's get to work to fix it.

Once suspended, chasm will not be able to comment or publish posts until their suspension is removed.

Once unsuspended, chasm will be able to comment and publish posts again.

Once unpublished, all posts by chasm will become hidden and only accessible to themselves.

If chasm is not suspended, they can still re-publish their posts from their dashboard.

Once unpublished, this post will become invisible to the public and only accessible to Charles F. Munat.

Thanks for keeping DEV Community safe. Here is what you can do to flag chasm:

Unflagging chasm will restore default visibility to their posts.