This post is the continuation of a very old article I wrote more than 6 years ago. Back then I used Python instead of JavaScript/TypeScript, and I didn't bother about properly explaining how this works nor any other lesson we can learn from this example. Well, I'm here today to remediate that. 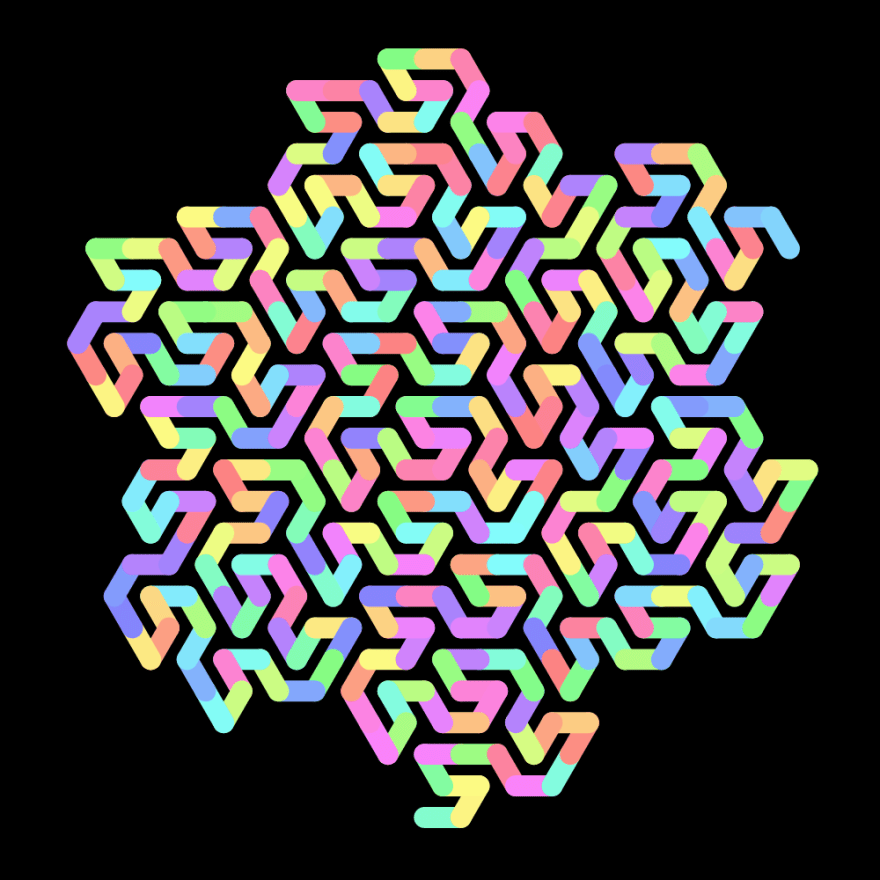 Note: I didn't finish GIF generation yet, so you can only see the animated version of this image in the original post, where I'm more free to include my own JS code.

The animated image you can see above is an example of a Gosper curve, which is an interesting particular case of an L-System that also happens to be a space filling curve.

If we take our initial state i and recursively apply P until a certain predefined depth, we end up with a string that can be interpreted as instructions to draw our curve!

If all this formalism leaves you cold, don't fret, we'll jump straight to the code right now! 🎮.

How we structure code

There are three very important functions we need to generate our image:

This code is in TypeScript, but it's pretty straightforward to simplify it and obtain plain JavaScript.

The baseChain parameter corresponds to our initial state i, while level is used to indicate how deep is going to go our recursive function. The deeper it is, the more complex our final drawing will be.

To generate our list of points, we'll need a couple of helper functions (so we can rotate vectors and add them to points), plus some constants.

Extra tweaks for our generated points

To make things easier, we also create a wrapper function that calls the two previously defined functions, and re-aligns our generated points to ensure they are centered in our canvas:

Preparing the canvas and dealing with HiDPI

Ok! that was a lot of code, and we didn't draw anything yet. But we're getting close. Now that we know how to generate a list of points, it's time to draw them.

For that, we'll prepare our canvas, and we'll also take care of ensuring that our image doesn't become blurring in HiDPI screens. In our HTML, we'll place our canvas object (we could create it in JS as well, of course):

I wrote the following function after noticing that my generatd image was slightly blurry, and it is inspired by this article and this StackOverflow post.

You can see the difference between implementing the rescaling trick or not: 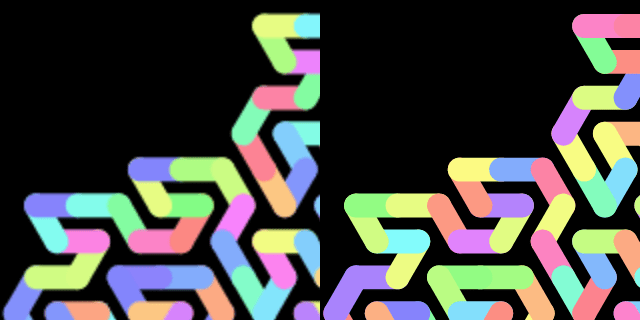 This piece of code is relatively big, so I'll try to explain it before you start with it, to make it easier to understand.

One relevant detail of this code is that we use an HSL color space. We fix saturation and lightness, and let the "hue" change over time, but in discrete steps (I decided to have a relatively small palette, of just 128 colors, plus black).

Another aspect I introduced is that colors change randomly, but they to change in the same direction to avoid too much flickery. To achieve that, I introduced a some "inertia" that makes the code a bit more complicated, but not by much.

That would be it! Now, there are still a couple of details that I didn't work on yet, but I would like to improve:

You might have noticed that I didn't use any library for the code shown in this article, and that I directly relied on HTMLCanvasElement functions. There are reasons for that.

Before I started writting this post, I wrote the same code, but using p5js... and I decided it wasn't good:

Start a new GitHub Discussion in the Forem repo.

Once suspended, castarco will not be able to comment or publish posts until their suspension is removed.

Once unsuspended, castarco will be able to comment and publish posts again.

Once unpublished, all posts by castarco will become hidden and only accessible to themselves.

If castarco is not suspended, they can still re-publish their posts from their dashboard.

Once unpublished, this post will become invisible to the public and only accessible to Andrés Correa Casablanca.

Thanks for keeping DEV Community 👩‍💻👨‍💻 safe. Here is what you can do to flag castarco:

Unflagging castarco will restore default visibility to their posts.