For quite a while now, if I wanted to generate a random number between two other numbers, I'd use the functions written in the Math.random() MDN docs

But I never really took the time to understand them. How do they work? I'll explain that, in this article.

Math.random() is simple! It outputs a random decimal number between 0 to 1.

Math.floor() and ceil() are a little different - they always round down and up, respectively. For example:

If you try using Math.random on sites like jsconsole, you'll see it always puts out decimals. 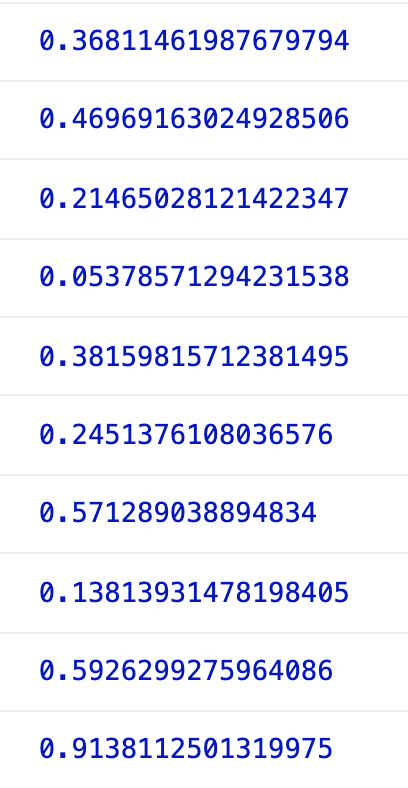 So if whatever you're doing is ok with decimals, you can use a function like this:

Well first, we need the return statement - otherwise the function doesn't do anything.
Next, you have Math.random() * (max - min). This multiplies the difference between your two numbers by the decimal less than 1 that Math.random() produces. For example, if your range is 1 to 10, than the difference is nine - multiply this by a number less than 1, and it becomes less than nine.

Ah, the function that I have copy and pasted the most.

This one's a little more complicated - it returns random whole numbers, or integers. The helpful people at MDN have added a comment saying "The maximum is exclusive and the minimum is inclusive". How does this work? Why use Math.ceil and floor?

Imagine for a moment that you are using the function, and put in 1.2 as the minimum, and 10.6 for the maximum. What kind of numbers would you expect to come out of this function? Any number from 2 to 10. If you were to simply use Math.round() on the minimum and maximum, your bounds would become 1 to 11 - which are too big!

Lastly, we again use Math.floor instead of Math.round or ceil- now that the bounds are from 2 to 10, using Math.round or ceil could result in a 2 being unfairly excluded from the results, or the number 11 being returned.

Helpful? Interesting? Too simple? Well, it's for beginners 😉. Leave a comment!