I've recently been playing around writing some smart contracts for fun with Solidity and the fastest way to validate the logic you wrote works as what you expect it to do is by unit testing. It was also a fun experiencing testing smart contracts with Chai and Mocha together with TypeScript. It made things quick and easy for me. And cheers to Hardhat for making things much more easier and convenient that it automatically generates all the TypeScript typings of a smart contract via Typechain. In this article we're only going to cover how we set it up using Hardhat and how we can make those assertions.

But why should we unit test our smart contracts? Can't we just deploy it manually using the Hardhat deploy script and from the UI we can point-click and test it from there? Yes, we can but eventually it's going to take us so much time, you can count off how many steps it took to validate that the smart contract that we wrote has been working as what we expect. With unit testing, we can directly make calls to those methods and make the assertions or even console logging if you so desire to in a single test file.

With all that being said let's get right on to it. 🚢

Outlining the stack that we are using for this tutorial:

As mentioned above we are going to use Hardhat for this. Just in case you don't know what Hardhat is, it provides a development environment for Ethereum based projects. It's very intuitive I like it and the documentation is also great. You can visit the docs from here.

Then navigate into the new directory created

Next is we'll initialize a Hardhat project with the following command (Assuming that you have Node.js installed already in your machine)

You should then see the following output in your terminal

And proceed to selecting "Create an advanced sample project that uses TypeScript", it will just scaffold everything for us. When that gets selected, just say yes (Y) to all questions the CLI asks.

Now that's all setup we can open the code in our favorite IDE, the almighty Visual Studio Code.

And finally stage all the changes and commit with "Init" message

As you notice like any other Hardhat initial projects, we got a Greeter smart contract. In this scaffolding we also have that and got a test case on TypeScript. So to trigger a test execute the following command in your terminal. A test on test/index.ts will get executed.

You can see it for yourself and inspect the directory generated called typechain along with the artifcats directory that was generated too as the smart contract was compiled.

Ok so we'll modify our Greeter contract to have some slightly interesting test cases. In this smart contract it should do the following:

The requirements are a bit confusing aren't they? But that's exactly why we should be writing tests so we exactly know its behavior on-chain and we can fix up bugs during development before it gets finally deployed to Mainnet.

You can update your Greeter smart contract and we'll then create test cases for it.

Now we got our smart contract up to date to the requirements, the fun starts and we'll start testing it. Also I like to group my tests by function names on those function I am going to test it, it makes things easier to navigate in this test suite when things get bigger. Not only that but it helps me navigate easily when after a few months I have to look back at it again.

So basically I have the following structure:

The first describe is the smart contract name and each child describes are all the functions that are in that smart contract. But you can structure your tests in any way shape or form that you think it's much easier to go with.

Writing a test for function sum

Here's a test case for testing the sum function

For a quick breakdown, I created a local variable and used let to reassign it but have a type of Greeter which was generated by Typechain as the smart contract was compiled. And on the beforeEach for every test case it's going to execute that and set the value for the contract variable. So basically in all test cases we can just directly grab it off from there and not having to copy-paste the contract in each single test cases.

Now run the tests by the following command

You might want to make the script a bit shorter if you're using yarn or npm so open up your package.json file and add a script for it.

Writing a test for getMyLuckyNumber function

Before we can assert getMyLuckyNumber we'll first have to save our lucky number into the smart contract to set the state in ownerToLuckyNumber and grab the value from there. For a short breakdown on what's happening on the test below. We have the contract deployed and we called saveLuckyNumber and pass down a value of 5 and once that's done we call getMyLuckyNumber and store it to a local variable myLuckyNumber we then proceed to assert and expect it to be not undefined and to be not null and finally since uint256 is considered a BigNumberish type we just then convert it to a simple JavaScript friendly number by calling toNumber on object type BigNumberish which is our myLuckyNumber local variable. Then just expect it to equal to 5 because we previously called saveLuckyNumber with value of 5. 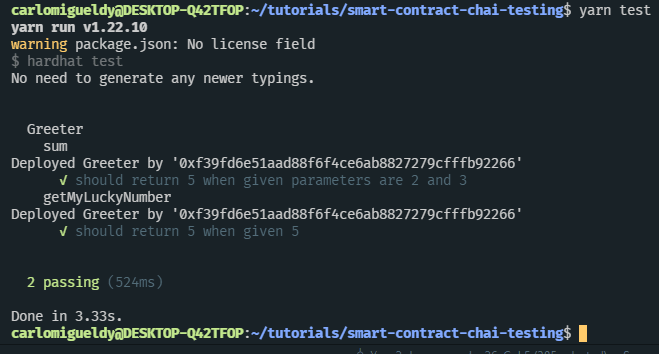 Now here we can test out and expect reverts when a condition in the modifier does not satisfy.

For the first 2 tests, we intently make it fail by going against the modifiers that we defined. The modifiers are there to protect anything from unexpected behaviors, thus reverts it when it fails to satisfy the modifier.

For a breakdown of each test cases on saveLuckyNumber:

Finally for the last function that we will be testing. This function allows the User to update their existing lucky number on-chain only if so they remember their previous lucky number. If they don't remember then they can just check for it by calling getMyLuckyNumber

To break it down for you: 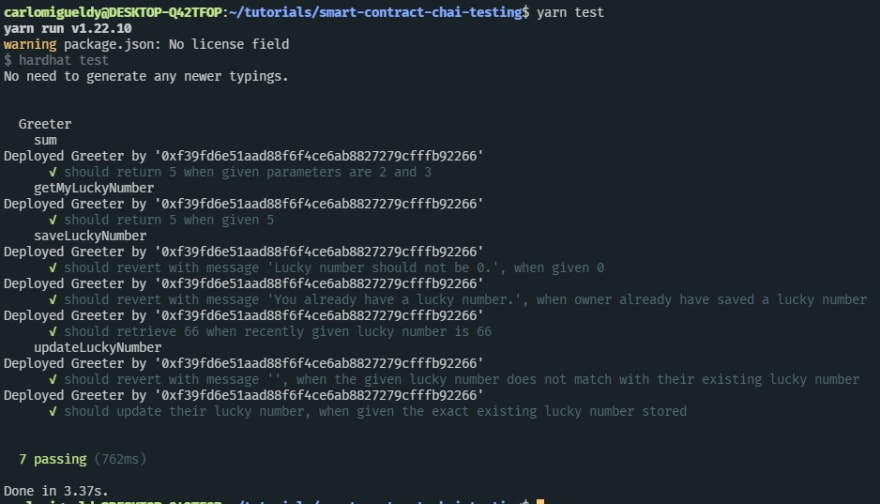 And every thing passed! That gave us the assurance that our smart contract works as what we expect it to do. So that's a wrap!

We've covered creating a new project and a setup for Hardhat using the template that they provided which was extremely cool where we don't have to worry as much setting up those configurations ourselves. We've also learned how to make assertions in Chai and to expect certain values and expect a reversion with a revert message. And finally we notice how Typechain is working so well, it does most of the work for us by generating those types automatically every time we compile the smart contract, that was very convenient!

That's it for me, I hope you enjoy reading and hope that you learned something. Thanks for reading up until this point, have a good day and cheers!

If you haven't already joined a DAO, join your first DAO by going here @developer_dao go and mint your DAO NFT, get a pixel avatar and vibe into the Discord channel. See you there!

If you might have any questions or suggestions feel free to drop comments below I'd be happy!