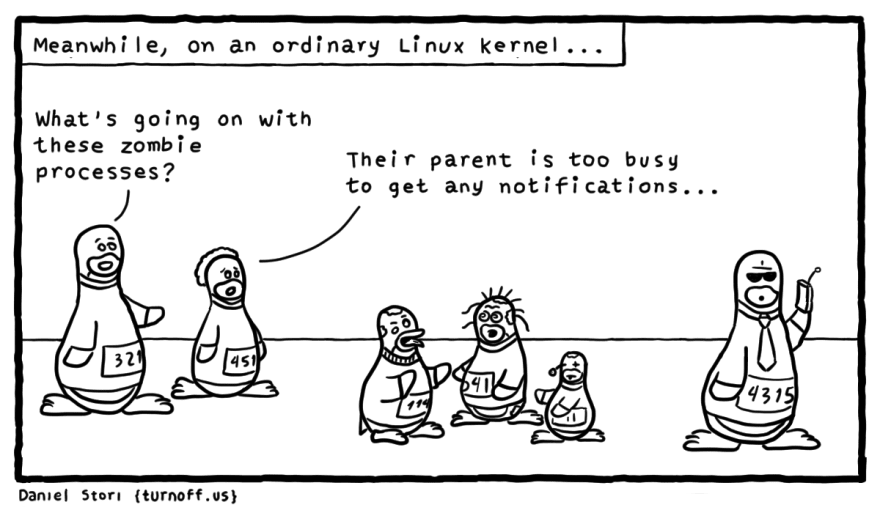 When interviewing system engineers a common answer for "what is a zombie process?" is "A process which is dead and doesn't have a parent" or something like "you can kill it with kill -9 <pid>". There seems to be a misunderstanding of zombie processes. Let's delve into what exactly a zombie is, and how they should be handled by Linux.

A zombie process is a process which has exit()'d and whose parent has not called wait()/waitpid() syscall against its process id (PID). Meaning, the process exited and left a status code for the parent to read, but the parent has yet to read it from the process table. Every process that terminates is briefly a zombie, they become an issue when they stick around too long.

This little snippet demonstrates how a zombie can be created:

A zombie shows up as <defunct> in the output of ps, when running the above snippet.

The problem emerges when too many exist and you run out of PIDs, meaning no more new processes (ex: can't ssh to a server that can't spawn you a shell..)

You can see the max PIDs with the following command.

It's a good idea to monitor process count on your machines. If you have a process leaking zombies that is long-running it will eventually fill the process table which could take down your service, prevent remote-access, etc.

A way you can remove a zombie is by killing the parent of the zombie, which would then re-parent the process to init (PID 1) who should periodically call wait() on its child processes.

Zombies usually appear if a program has a flaw where it doesn't call wait() on its children. what if the process got stuck in some infinite loop and never called wait()? what if that process was named init?

When init doesn't do its job...

A while ago I came across a number of servers that had thousands of zombie processes. My team had simply been rebooting these boxes to clear them up, but I became curious after noticing something odd:

All the zombie processes had init as a parent!

This means that processes were exiting, and init (as their parent), was never calling wait(). Additionally, if you were to kill a zombies parent to make init the parent, init would do nothing to help you.

init, as one of its core functions, should be calling wait() on its child processes to clear out any zombies, so what was happening?

stracing showed init stuck in a loop trying to write to a tty device, and each write getting ERESTARTSYS back (meaning: please re-attempt that write). Init had no mechanism to handle that error, so it gets stuck in an infinite loop.

As for why it was getting ERESTARTSYS, the tty it was writing to in this case was a serial tty. grepping the serial tty driver code for ERESTARTSYS found:

Writing to a serial tty takes a lock in the form of atomic_write_lock. Searching for info regarding this lock I found a bug:

Wrapping all this back together found a new bug due to a different bug.

If the serial tty gets into a deadlock, any logging that init tries to perform against it will get init stuck into a loop of write -> ERESTARTSYS -> write ...

If init stays in this state long enough, without the tty resetting, then zombies will pile up and you'll run out of PIDs.

How should init handle child processes?

Looking at the sysvinit source in src/init.c we see a couple different ways init handles it child processes. Here we see init establishing a signal handler for SIGCHLD

Examining chld_handler, this will execute if init gets a SIGCHLD signal which is sent to a parent when a child of theirs dies. Init handles zombies in a push model here by calling waitpid() and flagging the process as a zombie for later cleanup

Earlier, I said when init gets stuck in this state that it would not be able to reap any of its own children who exit, but it has a signal handler for this? so what's going on?

The initlog() function blocks all signals while logging:

So when we call initlog() anywhere in the main loop, and call syslog(LOG_INFO, "%s", buf); we hit our earlier bug. syslog() is respecting ERESTARTSYS from write() so we get stuck in here and we block all signals (including SIGCHLD).

Outside of the chld_handler's mechanism for reaping zombies, the rest of the main loop handles a variable called family which stores all the child processes of init. It loops over these looking for processes to kill and/or reap from the process table if they have died.

How to Install Kali Linux on VirtualBox: A Step-by-Step Guide