This is a typical question we get these days, and it can be answered using benchmarking. Let’s explore this fascinating topic in today’s post.

Our benchmarking journey and some technical background

Internally, benchmarking was an interesting journey, which I quickly want to recap first. From day one, one engineering goal behind Zeebe, the workflow engine within Camunda 8, was to develop a highly scalable workflow engine that can go far beyond what existing technology could do. Hence, measuring progress in the areas of throughput or latency was always top of our minds.

Feel free to skip this section if you are just interested in how to run your own benchmark in the latest and greatest way.

When we first released Zeebe in 2018, we hand-crafted a benchmark setup using AWS, Terraform, and Ansible. This setup created a Zeebe cluster alongside a simple load generator using the Zeebe Java client and then measured process instances started per second. While this was a good starting point, it was not yet great.

This first approach to running a benchmark resulted in two major lessons learned:

Let’s use the following example process:

To complete this process, the workflow engine needs to:

This is all interesting, but what does that mean for benchmarking? Basically, we need to balance process instance starts and service task completions. Our first attempt to do so was around 2019 when we created more realistic scenarios. In a nutshell, we said:

We packaged both as Java applications and allowed to configure, deploy and scale them via Kubernetes. Since then, we used those benchmark starters regularly and you can for example see it in action here. 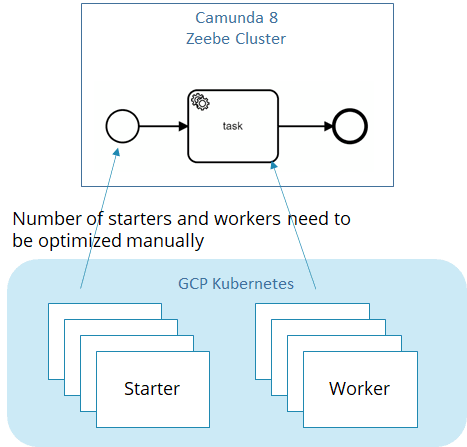 But there were still two problems that regularly hit us:

So we did a further improvement round:

This seems to work great. We now have a tool, where a simple Java application can benchmark Zeebe clusters without requiring much knowledge about how the benchmark works internally. The balancing algorithm should optimize itself. This tool is made available as a Camunda community extension (https://github.com/camunda-community-hub/camunda-8-benchmark) and can serve as a starting point for your own benchmarks. 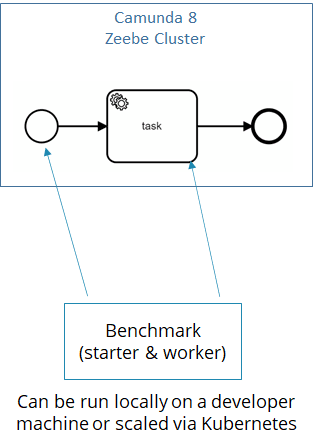 Now we run benchmarks controlled by one application that balances itself

Benchmarking vs. sizing and tuning

At this point, I want to throw in another important thing I have learned over the last years doing benchmarks: You have to be clear about your objective!

There are different things you can do:

Most often in the past, we did all of the above at the same time. Whenever we defined a cluster configuration (e.g. for our cloud SaaS service), we obviously benchmarked it. Running a benchmark might also yield some insights on performance bottlenecks, which can lead down a route of either performance or efficiency tuning. This will lead to an improved cluster configuration, which requires another benchmark run. This is an optimization loop you can basically do forever :-) The following diagram expresses this process:

You might already guess see the important trick: You need to be happy with the cluster configuration at some point in time. This can be hard, as engineers have a good instinct that the current configuration is not yet optimal (spoiler: it might never be). Still, you have to stop optimizing and accept a good enough configuration.

Also remind yourself, that no benchmark can ever be 100% realistic and therefore numbers should be taken with a grain of salt. My general recommendation is to stop tuning your cluster probably earlier rather than later, live with some fuzziness around throughput numbers, but then calculate enough buffer that you can cope with a reduced throughput for whatever reason. A typical rule of thumb is to size your cluster to accommodate at least 200% of your expected load. If you expect big peaks, this number might be even higher, to be able to guarantee throughput in peak times. You can also find some more thoughts about defining goals in our best practice “Sizing your environment”.

The metrics we are looking at

Let’s summarize all the important metrics we are looking at in our benchmarks:

Let’s walk you through an example.

Therefore, I will benchmark a Camunda 8 SaaS cluster of size “S” with our“typical” process and a “typical” payload.

The process contains 10 service tasks, one gateway, and two timers waiting for one minute each. I provide the following configuration parameters to the camunda-8-benchmark project:

With our two timers having a 1-minute delay each, and 10 service tasks having a 200 ms delay each, the cycle time must be at least 2 minutes and 2 seconds for “business” reasons.

Starting the benchmark, you can look at what’s going on using the provided Grafana Dashboard. In the beginning, it will increase the start rate, as the cluster is underutilized and no backpressure is reported:

After a while though, especially when service tasks kick in more and more, we will see backpressure and the start rate is slowly reduced. Now, you basically have to wait some minutes for the system to find a good optimum. In the picture below you can see the first 30 minutes of the benchmark. It took roughly 10 minutes to get to a relatively stable state.

From this benchmark run, we can then derive throughput and cycle time numbers. Ideally, you should look at those numbers only after the initial warm-up phase. 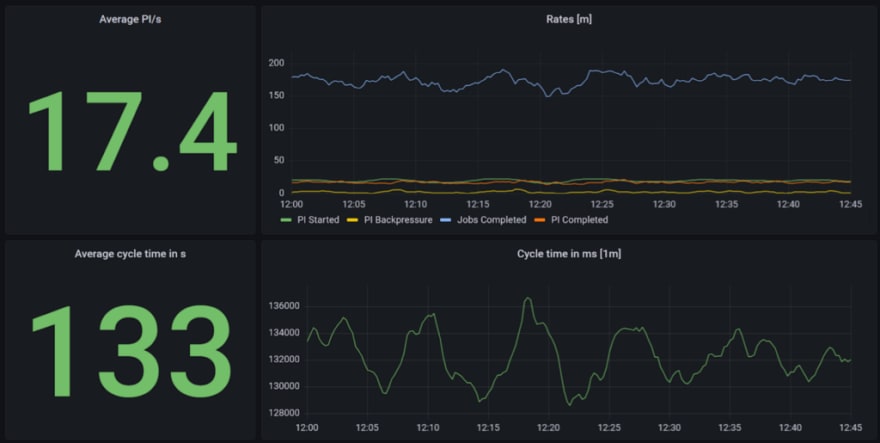 This video also walks you through running this benchmark.

Just as a side note: Of course, you can also use Camunda Optimize to see the process-related data (like count and cycle times) related to this benchmark. It’s less nerdy but even easier to use :-) 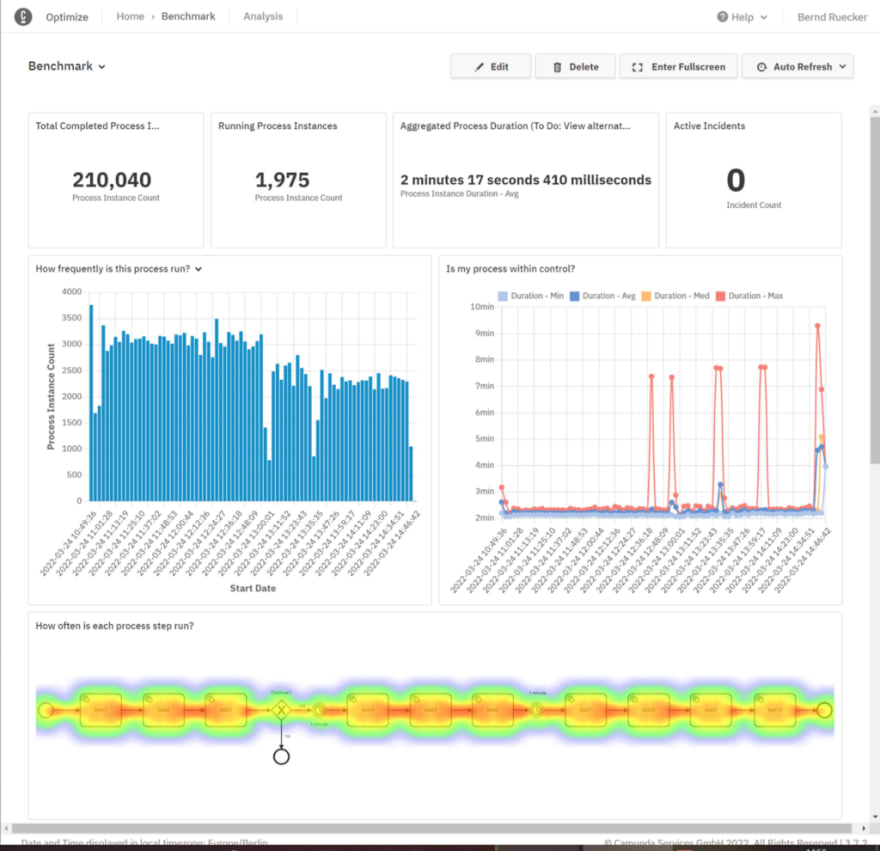 Running your own benchmark

No go and run your own benchmark using https://github.com/camunda-community-hub/camunda-8-benchmark. As described, one benchmark application might be sufficient to put smaller clusters under load. You can also run this starter via docker or on Kubernetes and scale it. You don’t necessarily need to adjust or configure anything but the Zeebe endpoint, but most often you want to adjust the BPMN process model, the payload, and the simulated time a service task will take. Please have a look at the readme of the benchmark project for details.

“Our production system doesn’t process anywhere near what the benchmark results showed!”

As mentioned, a benchmark can never be 100% realistic. Still, you should try to mimic realistic behavior to get valuable results and insights. The most important things to consider to make it realistic are:

Having said this, I wanted to add that it is a good idea anyway to follow our best practices to build process solutions that will run smoothly in production.

In today’s post I looked at the smallest cluster we offer in Camunda SaaS. While 17 PI/s is actually sufficient for most use cases out there, it is of course not the big number we love to brag about. I am currently preparing another blog post to describe a scenario that my colleague Falko benchmarked for a customer in the financial industry. They run 6000 PI/s successfully while keeping the cycle time below one second. Wow!

If you look at the benchmarking procedure closely, you will notice, that it concentrates on benchmarking the Zeebe workflow engine itself. If you look at, for example, the history architecture of Camunda 8, you can see that there are other components that are also important to keep up with this load, most prominently Camunda Operate and Camunda Optimize. Currently, we still have a gap there (which is why the official numbers provided with Camunda 8 are lower than the ones above). To address this, we currently add the other components to the benchmark chain and adjust metrics again. So a completed PI might also need to be visible in Operate and Optimize to count, for example.

Running a benchmark to figure out what your Zeebe cluster can do is easy using the camunda-8-benchmark community extension. To get started, you might only need a developer machine that is connected to the internet.

Bernd Ruecker is co-founder and chief technologist of Camunda as well as the author ofPractical Process Automation with O’Reilly. He likes speaking about himself in the third person. He is passionate about developer-friendly process automation technology. Connect viaLinkedIn or follow him onTwitter. As always, he loves getting your feedback. Comment below orsend him an email.

Interested in learning more? Get started with our developer resources!

Once suspended, camunda will not be able to comment or publish posts until their suspension is removed.

Once unsuspended, camunda will be able to comment and publish posts again.

Once unpublished, all posts by camunda will become hidden and only accessible to themselves.

If camunda is not suspended, they can still re-publish their posts from their dashboard.