Today's post is about why you should not entitle yourself as a PHP or JavaScript or X language software developer but as a software developer.
Yes, as a software developer. You might now be thinking that I'm incorrect about my point of view, but it's something that I have been experiencing throughout this month. Searching for a job opportunity sounds like a huge task nowadays, worst if you work with tools that some companies think that are obsolete. Back in 2017, when I realized that I can work at Google through https://careers.google.com, I was happy because it was the company that I dreamed of working for. But I always entitled myself as a PHP developer and Google doesn't use PHP and related languages like Hack HHVM, so my dream to work for Google went downhill. Throughout the time from 2017 to now, I've been improving my knowledge and experience in PHP and related tools, even knowing that Google doesn't use it. And I also I've been searching for job opportunities that are related to PHP and its ecosystem, but I found an ambitious role but they work with Ruby and Ruby on Rails. Should I invest my time to learn Ruby and Ruby on Rails, knowing that I can work with PHP and Laravel in other companies? Yes, I should invest my time and it is a must for me. I'm a junior software developer, with the intent to grow and learn with other developers. So, in my position now, all that I have to do is to learn all the possible things (especially in back-end & at least a front-end framework, because this is what most interests me) that I can to get myself in a good opportunity to get a good job and not just trying to entitle myself as an X software developer. 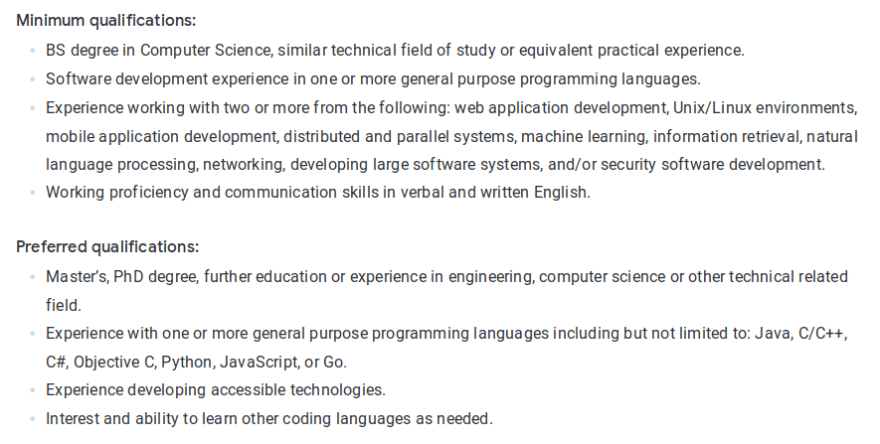 As you can see in the Google role above, the last requirement is related to this post. I have even heard that Google can hire developers that work with other languages different from those that are used at Google but they have to learn the specific languages used for their works at the company.

The snippet above is from the Shopify software developer role. They can hire developers who code in other languages than Shopify uses, but they have to get themselves familiar with Ruby and its ecosystem later.

I'm now working with PHP for my side projects, learning Ruby and Ruby on Rails and Python, and planning to learn C/C++ at a specific point in the future.

If you have different thoughts about the subject of this post, you can reach me out in comments.

Java - The Beginning (Part 1: The Theory)

Calvin Carlos da Conceição Chiulele
Passionate software developer. Just want to get myself better and help others around me.
7 VS Code Extensions that'll Help You Stay in Your Editor
#vscode #codequality #productivity #tooling
Guide to an Effective Code Review
#codereview #codenewbie #codequality #productivity
What are your recurring expenses as a developer?
#watercooler #career #business #finances