You may already be signing your Git commits with a GPG key, but as of today you can instead choose to sign with your SSH key! Signing in SSH is a relatively new feature that lets you use your private SSH key to sign arbitrary text and others to verify that signature with your public key.

This is great, because pretty much everyone has an SSH key (and pretty much no one has a GPG key). As developers, we’ve probably all uploaded one or more SSH keys to GitHub because that’s necessary to use git(1) to push to GitHub.

This all makes it pretty easy to sign and verify Git commits with keys we already have. There are a few settings you’ll need to configure to start signing.

First, we’ll want to configure Git to use SSH as the format for signing:

Next, tell Git what key to use for signing. You can find your SSH keys in ~/.ssh/ or list them with

On the off chance that you don’t already have an SSH key, GitHub have instructions you can follow.

To set the signing key:

I ran this, which won’t be useful to you:

You should see something like [main 02f6137] Testing SSH signing if you’ve configured signing correctly.

Git also lets you verify signatures, but there are more steps involved in this. First, some background. GPG/PGP provides a trust framework that allows you to specify specific keys to trust as well as to let you say “I trust this person(‘s key) to verify others’ keys” so that if you trust Caleb and Caleb vouches for Derek, gpg(1) will agree that Derek’s valid signatures can be trusted.

SSH doesn’t have this “web of trust”. Instead, it uses files like “~/.ssh/authorized_keys” and “~/.ssh/known_hosts” to configure what keys and hosts it should trust, respectively. For verification, we’ll need to create a file to configure allowed signers (see ssh-keygen(1) ALLOWED SIGNERS). While there’s no formal place to store this file yet, it makes sense to store a global “database” of allowed signers in “~/.ssh/allowed_signers” and a project-specific file might be stored in “/.git/allowed_signers" if you'd like to maintain your own list or "/.allowed_signers" if you want to commit the file and share it.

So given all of that, let’s see what our signature looks like on that commit we just made:

The first thing you’ll note is that Git claims there is “No signature” even if we made one. Don’t Panic. We also see on the first line an error from Git noting that we need to configure an allowed signers file. We can set that up globally with:

We’re making progress here, and we see that there is a good signature, but that the key is not found. That’s because the allowed_signers file is empty. We can populate it with our own key like this:

The format for the allowed signers file is documented in ssh-keygen(1) ALLOWED SIGNERS and effectively boils down to:

What is not made explicit in that documentation is that wildcards can be used in place of the email portion. While this may make reduce security in principle by allowing anyone with access to the key to sign, in practice Git allows both committer and author emails to be specified so there is no real security impact here and it makes things somewhat easier.

When we try showing the signature again, we’ll see a successful verification:

GitHub provide public SSH keys for all users at URLs like https://github.com/calebhearth.keys, so you can use that along with the Git author email address to add new allowed signers to that file. That’s manual and a bit of a pain, so I wrote up this very quick-and-dirty script that will pull all keys for all signed commits since 14 November 2021 (the day before Git SSH signing was released) and print them out in authorized_signers format. You can run it on any repo and append the output to your authorized_signers, after which you may want to de-duplicate entries.

After all of this, here are the changes to my ~/.gitconfig that I’ve made to sign with SSH: 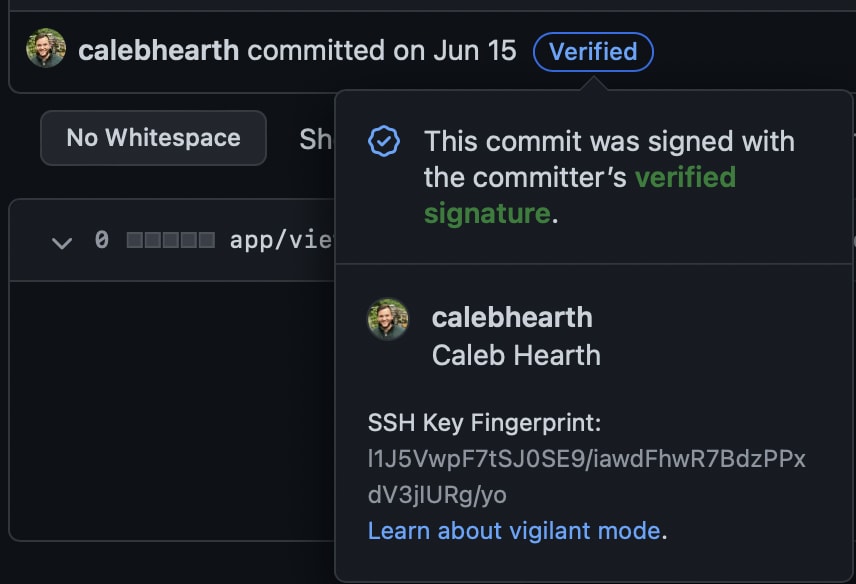 You’ll need to upload your key to GitHub as a signing key, even if it has already been uploaded as an authentication key (this is a new dichotomy introduced to support this feature). Once that’s been done, you’ll see that commits signed with your SSH key are correctly shown as verified on GitHub:

Using SSH to sign and verify Git commits, after a bit of setup, should be really easy and a great alternative to GPG signing and verification.

I do have an early wishlist for improvements:

TIL: diff-so-fancy; and some funky git config

Once suspended, calebhearth will not be able to comment or publish posts until their suspension is removed.

Once unsuspended, calebhearth will be able to comment and publish posts again.

Once unpublished, all posts by calebhearth will become hidden and only accessible to themselves.

If calebhearth is not suspended, they can still re-publish their posts from their dashboard.

Once unpublished, this post will become invisible to the public and only accessible to Caleb Hearth.

Thanks for keeping DEV Community 👩‍💻👨‍💻 safe. Here is what you can do to flag calebhearth:

Unflagging calebhearth will restore default visibility to their posts.