It's been long since I've been observing articles, tweets, or videos on how UX is like the "single most important item" or like "the icing on the cake". You even have parts of the UX community continuously trashing on anyone who just opens dribbble.com, or who would not agree to "Usability over aesthetics" (cause it ain't true always).

Even I fell into this ego trap and established my authority using the "UX" entitlement. It took a while for me to have a big enough slap on my face and be aware of it. And I just don't want anyone who's getting into UI/UX to be up there.

What's worse is how everyone wraps the UX side all up with some "linear" systematic process and case studies, which is usually what someone starting out observes everywhere (esp on Medium). Most of these depend on data from users (mostly fake), obtained through boring forms & other metrics, and stops right after the first iteration of the design.

"So why is this a problem" you might ask. Lemme explain.

Ah, it all comes to this very overused analogy, which shows how 'UX is always the King' and how 'the aesthetics don't matter, it's always the accessibility & usability. 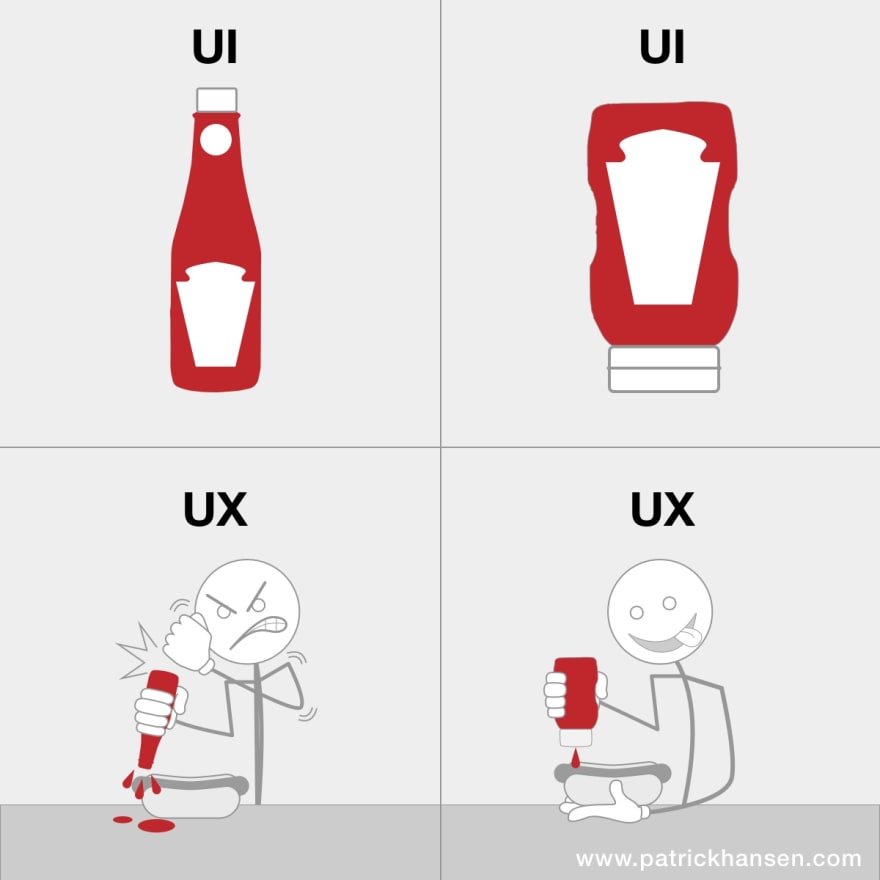 When it simply ain't it! It's missing something else which is much important.

This is just the tip of the iceberg. Ask a couple more questions and would get to know why it isn't as simple as just "what the user wants".

And that's exactly the problem with most of the UX goers

The over-emphasis on user

Lemme be honest, I would use the ketchup bottle on the right.

I mean if you took a survey, even most would choose it. And you can show this to the premium hotel manager client and be like: "You are fricking wrong. See what the data says". To which the client would reply he doesn't care, he just wants the one that is on the left cause it looks more premium, and fits his brand.

This then sets you off to making tweets, articles, or memes on how clients are fools, and how they need to learn a bit of UX to get some sense in the puny brain of theirs, or something (I am seriously not venting out on my previous clients over here).

Thus teaching new designers, who get to see all these, to give zero facks about the client.

Okay, I guess I went too far but wasn't that scarily accurate?

I don't mean to say that the client can never be wrong. What I mean is the fact that you have been focusing on the wrong group of syllables of "User Experience".

Your eyes were on "User", instead of focusing on "Experience"

You need to collaborate!

And suddenly you are not the 'entitled being' who knows it all. You are just a part of the team that works with the UI Designer and others, helping in designing the greatest experiences for the "humans" using it. (yes "humans", not data points)

And the scary part of this is you can't predict or control much of the human experiences or emotions. You can only influence it. So how do you do it?

How to create a better experience

Instead of doing more research, giving out more forms, getting more personal data of the users, or doing more wireframe tests — start thinking about how the users would use the products in the given context.

But it's the same with doing all research and collecting data too. It's just that these assumptions have selective data to back it up (notice that I used 'selective' and not incorrect). And that adds up to your ego too :P

The real research starts after the user uses your first draft/prototype of the design. This is where you need to gather data and ask in to fill the forms with regards to the experience, not about the user.

This means yes, it's not a linear systematic process where you do the research, collect gibberish, make some wireframe, submit it to the UI Designer, and shake the dust off your hands. Collaboration and finding a middle ground is the key.

So, start collaborating with the UI Designers and others to forge the greatest experience for the user. For this, the UI Designers must know about UX and vise versa, as it's important for effective communication.

As soon as you change your perspective and start delivering experiences you will get to understand how much a role UI plays. You realize the amount of correlation both have. Contrary to popular belief, UI is a part of the UX, and they aren't separate entities.

So What's the takeaway

People (especially those who write UX Case Studies on Medium) often forget that Design is an iterative process. Instead of testing their design and improving upon the feedback they receive, of the experience they deliver, they just stop after the first iteration of the design, and tell how right they are through pointless research, fake personas, and whatnot.

Instead, I encourage y'all to start focusing on documenting the feedback process after the first iteration of the design and show how you improved it upon feedback. This way you can accurately understand wherein you have come short when it comes to delivering the experience to the user, and have an idea on how you can make the experience even better by the next iteration.

At the end of the day, the greatest products aren't the ones with great user research, its the one that provides great value and also improves on feedback.

Once suspended, byteslash will not be able to comment or publish posts until their suspension is removed.

Once unsuspended, byteslash will be able to comment and publish posts again.

Once unpublished, all posts by byteslash will become hidden and only accessible to themselves.

If byteslash is not suspended, they can still re-publish their posts from their dashboard.

Once unpublished, this post will become invisible to the public and only accessible to Denin Paul.

Thanks for keeping DEV Community 👩‍💻👨‍💻 safe. Here is what you can do to flag byteslash:

Unflagging byteslash will restore default visibility to their posts.