Since the official release of .NET 6, the rumors about .NET 7 and the new features it would bring started. Today .NET 7 is (almost) a reality and it seems that Microsoft is now confirming many of the rumors that we are in front of the fastest .NET version ever: .NET 7. Let’s take a look at the latest performance improvements released by Microsoft.

They are mostly used for manipulating instances of loaded types and with them you can create types dynamically in a simple way.

With this update by Microsoft, now in .NET 7 the overhead when invoking a member using reflection has been reduced considerably. If we talk about numbers, according to the last benchmark provided by Microsoft (made with the package BenchmarkDotNet ) you can see up to 3–4x faster.

OSR (On Stack Replacement) is a great complement to tiered compilation. It allows, in the middle of the execution of a method, to change the code that is being executed by the methods that are being executed at the moment.

With OSR, we can obtain up to 25% extra speed at start-up (Avalonia IL Spy test) and according to TechEmpower, improvements can range from 10% to 30%. 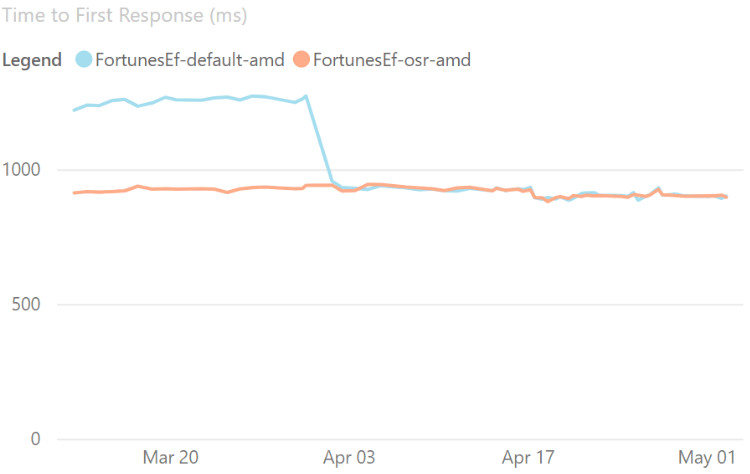 Another advantage of using OSR, is that applications (especially with dynamic PGO), are improved in terms of performance due to optimization. One of the biggest improvements was seen with Array2 microbenchmark:

📚 If you want to know in how OSR works, please refer: OSR Document

As we have already seen at the beginning, Microsoft has decided to focus mainly on performance improvements and this one is no exception. Now with Reimplement stubs to improve performance we have seen an improvement in startup time that, according to Microsoft, is up to 10–15%.

This is mainly due to a large reduction in the number of modifications after code creation at runtime.

Native AOT (Ahead-of-time) is another of the new improvements and novelties that Microsoft brings this time in .NET 7. Native AOT could be considered an improved version of ReadyToRun (RTR).

To explain it quickly, AOT alone is the technology that is responsible for generating code at compile-time (not run-time). On the other hand, RTR is basically the same but focused and specialized in scenarios where the main architecture is client-server. There is also Mono AOT (which is the same but for mobile applications).

This native code generation at compile time has some advantages:

“Applications start running the moment the operating system pages in them into memory. The data structures are optimized for running AOT generated code, not for compiling new code at runtime. This is similar to how languages like Go, Swift, and Rust compile. Native AOT is best suited for environments where startup time matters the most.”

In addition, they have revealed a benchmark comparing NativeAOT against ReadyToRun, in which the compile time is up to 73% faster and almost half as light:

This improvement is not very impressive but it still manages to improve performance significantly. This time Microsoft has decided to proceed with the elimination of the initialization conditions of the loop cloning variables:

According to Bruce Forstall in his pr:

“Assume that any pre-existing initialization is acceptable”

“Check condition against zero if necessary. Const inits remain as before”

These improvements allow a 21% performance increase with System.Collections.Tests.Perf_BitArrayLeftShift (Size:512) . Let’s see the benchmark provided by Microsoft:

It seems that we are in front of the next fastest .NET. What do you think? Do you think Microsoft will continue to keep the focus on speed and performance? Or what would you like to see implemented in .NET 7?

How to Run dotnet apps Like npm run on Every Platform