In order to cover all the steps and processes needed for web3 developers to publish their Dapps, from development to hosting, Bunzz has closed its most recent partnership with Spheron protocol. This will make the final development stage easier and faster for Bunzz users.

Spheron makes front-end web deployment easy, effective, and efficient through its blockchain-based platform that takes web apps to the DSNs (Decentralized Storage Networks). It removes the hurdles of centralization and censorship through blockchain, ensuring that Dapps are permanently deployed and experience 99.99% uptime throughout their life.

We are delighted to give a glimpse of how this partnership eases the process of deploying DApps to both Spheron and Bunzz users. 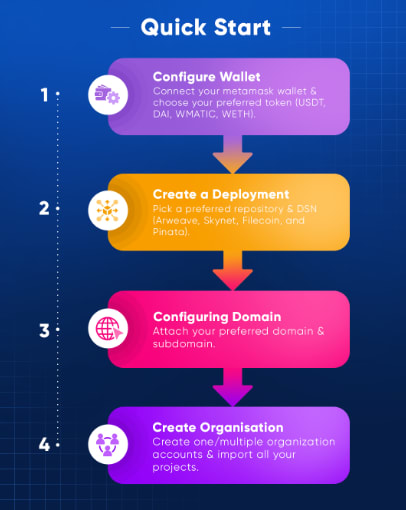 Check out more detailed information on our Docs here:

In summary, Spheron is an all-in-one decentralized platform created to make the deployment of web apps easier by providing solutions that are transparent, immutable, and cryptographically verifiable, giving full control to developers over their data without worrying about censorship, outages, or hacking.

With the Spheron X Bunzz partnership, all projects under Bunzz shall have preferential access to the Spheron application and Vice versa.

Join other web3 developers on Discord

Once suspended, bunzzdev will not be able to comment or publish posts until their suspension is removed.

Once unsuspended, bunzzdev will be able to comment and publish posts again.

Once unpublished, all posts by bunzzdev will become hidden and only accessible to themselves.

If bunzzdev is not suspended, they can still re-publish their posts from their dashboard.

Once unpublished, this post will become invisible to the public and only accessible to Bunzz.

Thanks for keeping DEV Community safe. Here is what you can do to flag bunzzdev:

Unflagging bunzzdev will restore default visibility to their posts.