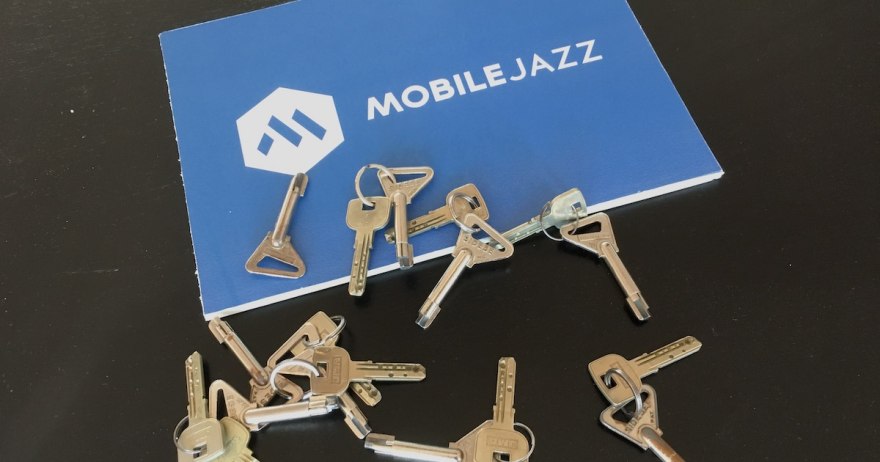 It’s fast approaching six months since Mobile Jazz left its last office behind. It was a watershed moment for the company: the day we took the final step and went fully remote. Looking back now, it feels like a great decision - one which has made our company culture even tighter and brought us closer together, not further away.

I was talking about this with Paolo, one of our iOS developers, the other day. He was one of Mobile Jazz’s earliest employees and he was fully remote from the start, working from Italy. So his experience of the office was completely different to mine. For him, our decision to leave the office behind didn’t involve any change at all. But for a lot of us, it felt like a turning point in the company’s history.

The office, in the centre of Barcelona, was a key part of Mobile Jazz’s early history. Our co-founders Stefan and Jordi rented it in 2012, just a few months after the company was founded, and it was a backdrop to their success as Mobile Jazz grew to more than 20 members of staff and took on loads of new clients. It gave us a base, and an identity. Barcelona became the spiritual home of the company; it still is today.

The building had an amazing location on Carrer de Nàpols, just a 30-second walk to Avinguda Diagonal, Barcelona’s most famous arterial road. Gaudí’s Sagrada Familia was a five-minute stroll to the north, and to the south we had the beautiful Parc de la Ciutadella and the beach. 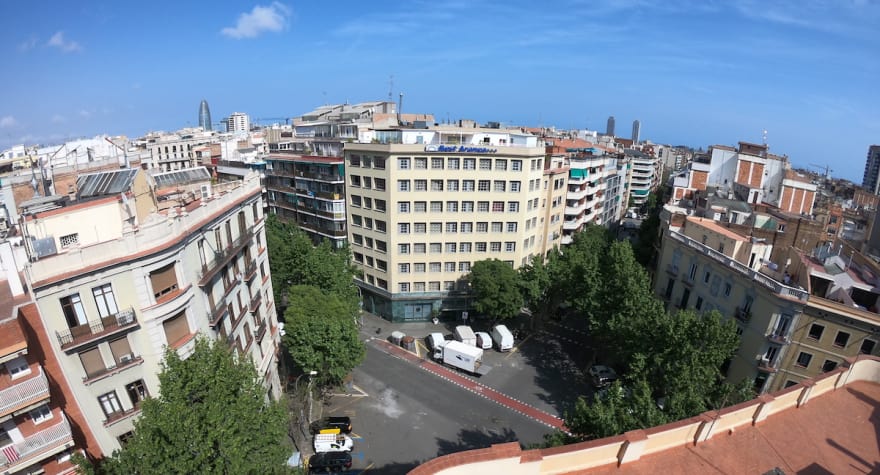 The view from our terrace in the Barcelona office

Everyone based in Barcelona enjoyed hanging out at the office. The barbecues and after-work drinks became legendary and it provided a great place to mix with people from different teams, particularly in the early days when many of us lived locally. It helped forge the team spirit we have today.

But, over time, it felt like the company had evolved beyond a physical base. Right from the start, we’d embraced remote working. People were encouraged to work wherever they felt most productive. So as people became more familiar with their clients and their workload, many chose to work at home or travel the world, using the time they’d previously burned on the commute to complete more important tasks.

Jordi would actually come in almost every day, as he lived locally and enjoyed the office routine, but Stefan was travelling across Europe and would only pop in when he was passing through Barcelona. Others used to come and go as they pleased. Sometimes the office would be full - particularly for the team meetings on Wednesdays - and others it would be almost empty.

Personally, I used to go every day when I started with Mobile Jazz, but this dropped to once or twice a week by the second year. I had a 30-minute commute, which could be longer on certain days, and it just made more sense to work at home. By the time the office closed down I was only once or twice a month, and that drop-off was the same for a lot of the people based in Barcelona. We’d still meet up at night to have drinks or dinner, but we enjoyed the freedom and the responsibility of working at home by day. 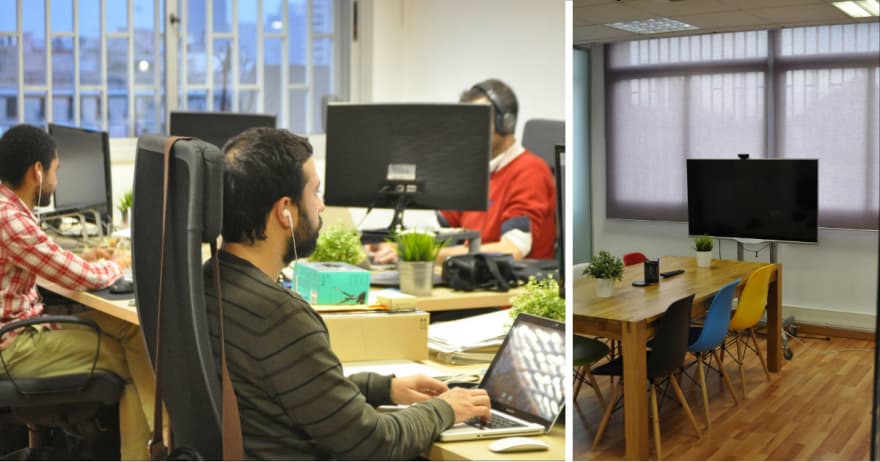 Working in the Barcelona office and one of our meeting rooms

By the end, there were times when the cleaner would turn up and there would be no-one there to let them in - or someone would have to get the metro from home just to open the door for them, which was a complete waste of time. The office cost quite a bit to rent, and it was silly to spend that money if no-one was using it.

So Stefan broached the subject of leaving the office in March and then we discussed it at the weekly meeting shortly afterwards. It wasn’t much of a surprise; we’d talked about it before, and many of the MJ team were now working internationally. Closing the office seemed like a logical step.

But that’s not to say it wasn’t emotional for those of us who were still in Barcelona. I remember Jordi going to clear up and just sitting in the office some evenings, reminiscing about how far the company had come since he and Stefan hired that building. He’s from Barcelona himself, so that physical space in the heart of the city was hugely significant for him. 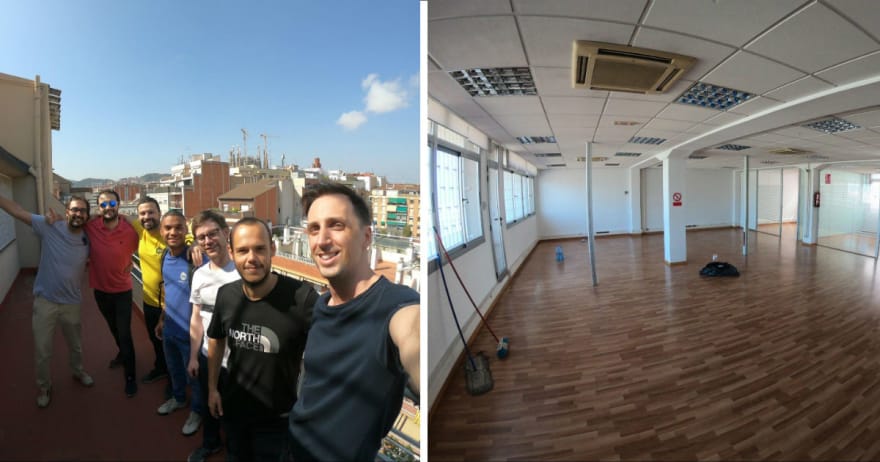 Our last day clearing out the office

For me personally, it felt significant as well. I was fully supportive of closing the office, but at the same time it was sad. It’s been a huge part of my time in Barcelona and, as I’m returning to the UK soon, it felt like the first ‘goodbye moment’ for me after an amazing adventure in Catalonia.

But as Paolo said to me the other day, MJ was built to work like this. Some companies want to start working remotely before they have the infrastructure in place, but MJ was a remote company when we still had an office. Everything we do is written in a document or spreadsheet somewhere, so we were ready for this step. Even when people were working side-by-side, we’d be communicating as a team via Slack or Asana. We even have a company handbook and an internal wiki, documenting everything you need to know about working for Mobile Jazz.

That’s not to say there haven’t been teething problems. No matter where you choose to work, you need a stable internet connection, proper equipment and a conducive environment. I remember one team member going to visit his family and expecting his father’s laptop to work, only to find it had broken down and he had to find an alternative urgently!

Everyone has had to find their own sanctuary, where they can work effectively without distractions, and that’s not always easy. Paolo recalls trying to work in a coffee shop when he first started and ditching the experiment quickly, as he couldn’t focus. One or two of us have had a similar situation.

Emotionally it can also be tough sometimes. If you have a bad day working, it’s worse when you’re remote, as you can’t talk to anyone about it. I think that, in the early months, a lot of us who’d worked in the office missed having that option - somewhere you could go every so often to check in with the rest of the team and catch up.

But Stefan and Jordi have made some great changes to replace the physical hub we used to have. They’ve brought in an annual company retreat, which is fully paid and gives us a chance to come together every year. This remote week is completely focused on the company, filled with talks and demos, hackathons, discussions and growth plans. The first one is in Gran Canaria and, as summer draws to a close, we’re all eagerly looking forward to a hit of autumnal sun! 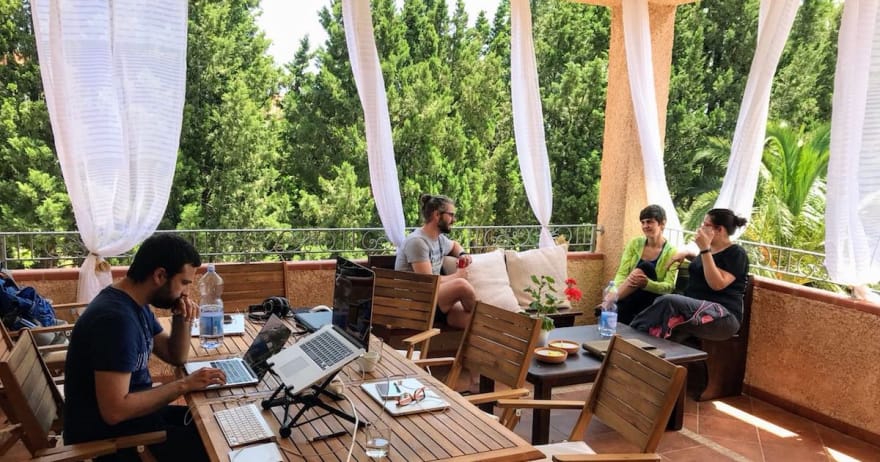 We’ve also started having weekly 1-to-1 calls, with people from different teams paired together. These calls allow us to find out about someone we don’t work with day-to-day, ask them questions and build a connection. It’s designed to replace the social aspect of the office, where you’d be able to chat with people outside your team and go for lunch with them.

Now it feels like we’re fully up to speed with working 100% remotely, and we’re already seeing the advantages. The financial saving is great, as it allows us to invest in other parts of the business like the Gran Canaria trip. But the bigger benefit is the freedom we have.

It feels like the business is really working for us, not the other way around. We’re all free to explore the world, without being tied to a particular location. A lot of us are keen travellers, so MJ’s approach is perfect. And for Stefan and Jordi, being fully remote means they can hire the best people anywhere in the world. The talent pool is endless.

If we were advising other companies on how to transition away from an office-based environment towards remote working, the advice would be simple: make sure you’re prepared. Make sure the infrastructure is in place, with everything documented, and build in regular team catch-ups using video conferencing. Also, don’t be afraid to try it out on a trial basis, with a small number of staff going remote before everyone else joins them.

But we’d also say that, if you get it right, it’s a truly empowering, liberating decision. We’ll always remember that office in the heart of Barcelona, but six months after leaving it behind, it feels like we’re fulfilling our natural destiny.

How To Succeed On Your First Day 100% Remote

Bugfender
Get fast remote access to your applications’ log files on users’ devices - wherever they are in the world. Bugfender logs virtually everything, and goes beyond simple app crashes. It even logs...
A Blueprint for Modern Working: Six Hacks for Asynchronous Success From the Mobile Jazz Company Handbook
#remote #career #showdev
18 Tips for Working Remotely This Year
#remote #workremotely #tips
How to Bring a Remote Office Together
#remote #culture