Building applications/websites with Angular always comes with a downside: the bundle size.
The latter has a direct impact on the loading speed & the user experience of our projects.

Even if we finally reduced the bundle size, there are other boxes to check to have the ideal website.

Personally, I have four steps to follow when building apps/websites.

On this post, we will focus on the last step.

I'll start with the problems I've faced, then how I've addressed them.

The following link is a showcase of my website after the 3rd step.

From this video, I can extract four visual problems :

The website looks broken for a split second, then loads ordinarily 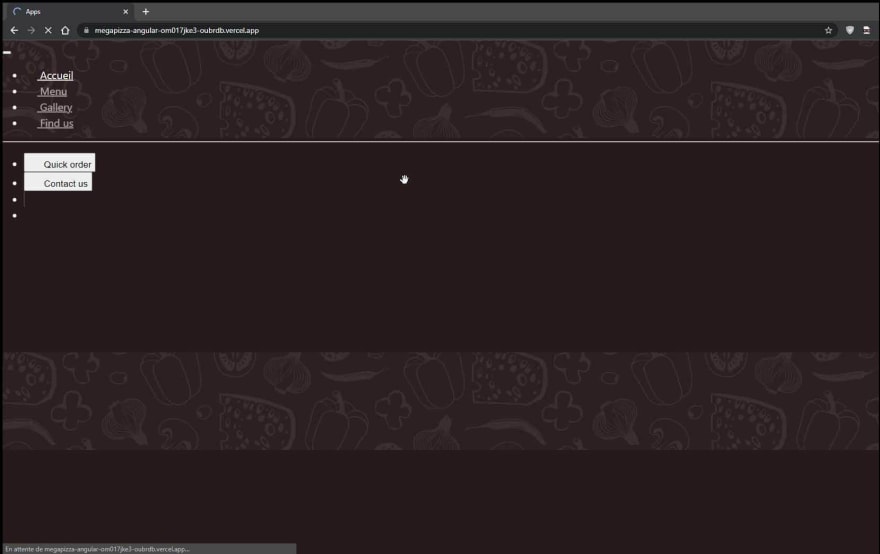 The font took ages to load, same thing goes with the pizza picture 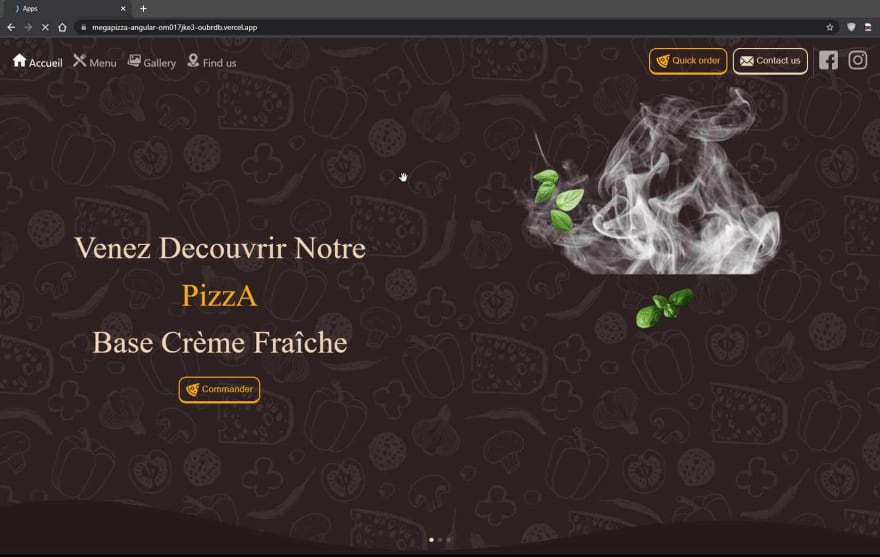 Let's open the dev-console and see what's happening under the hood.

I can take out two issues from this video

The website took 4.57s to fully load, with 98 requests and 5.4 MB of resources. To put those numbers into perspective, a 3g internet will take about ~24s to load all the resources. 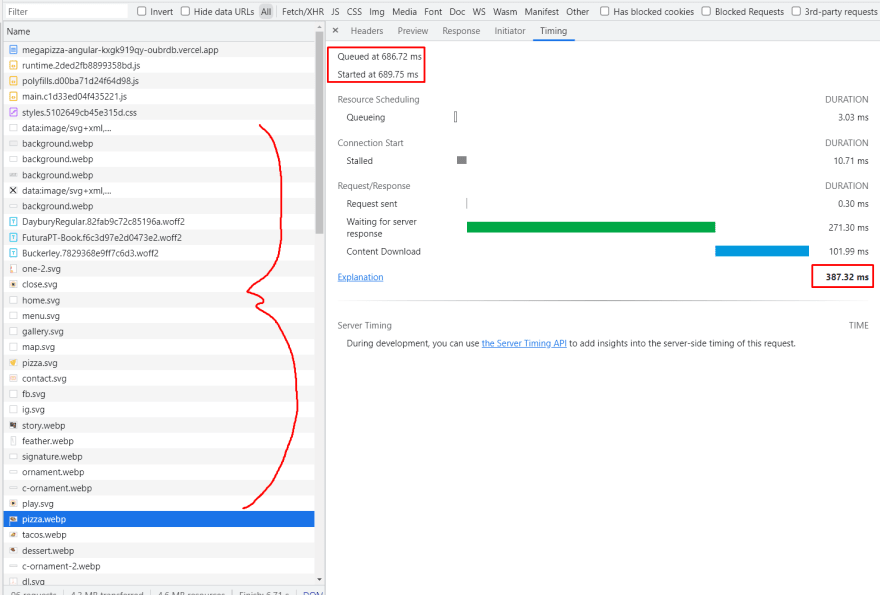 You may ask : Why did he pick the pizza picture from all the other pictures ?
I'll answer you with another question :
What picture do you see first when you visit the website ? 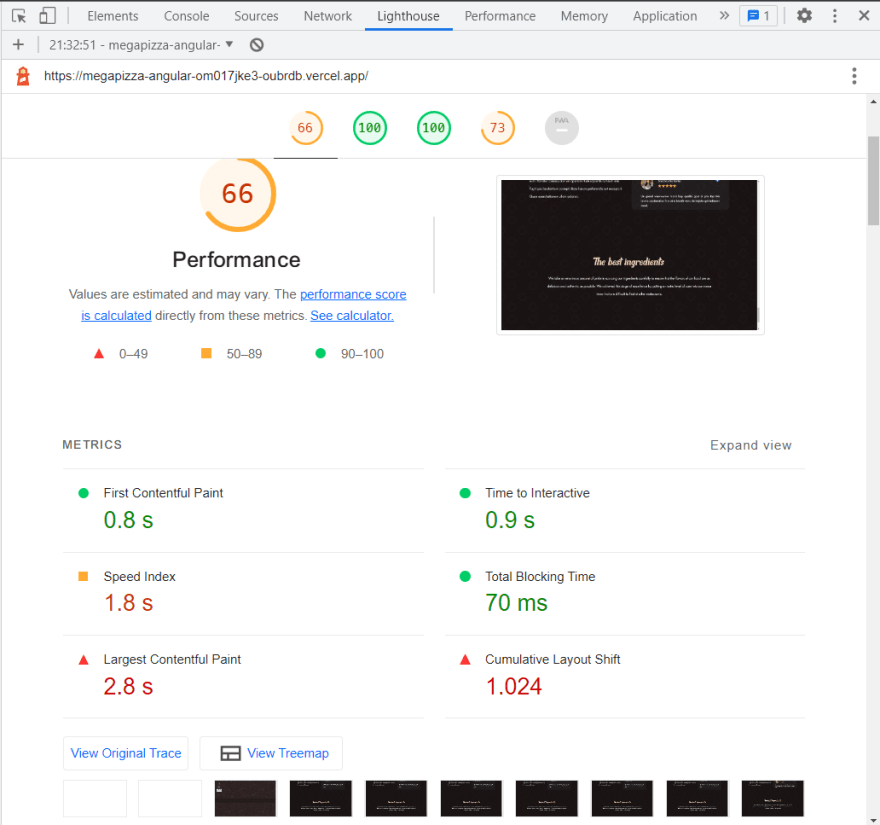 As I expected, the LCP (largest Contentful paint) and the CLS (Cumulative Layout Shift) are bad, because of Invisible problem N°2 and Visual problem N°1 respectively, surprisingly the First Contentful Paint is good.

Not that bad, but we can do better.

There are lots of ways on how to reduce the bundle size, but that's not the subject for today, here I'm showcasing how 'I' optimized my Angular website.

The first thing I personally do is to Lazy load noncritical third party libraries, this means libraries that are not required the second the website loads, therefore their load can be delayed until all the more important resources are loaded. I'll give you an example to clarify more :

In the following video, I'll explain in detail the process :

The code I used in the video :

The same process goes with Bootstrap, remember jsdelivr ? Search for 'bootstrap' and :

Copy the link and replace the old with the new one.

ℹ️ Ps : Remember to remove any other imported Bootstrap JavaScript

My website is a single-page website, even though, Angular routing is installed. To fix this, all I need is to comment out AppRoutingModule on my app.module.ts 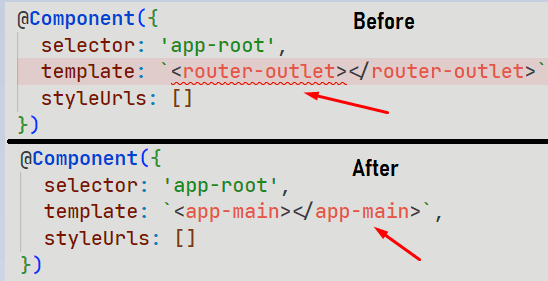 You can check the website after reducing the bundle size.

About lighthouse, the score has improved a little, but the website still has all the problems mentioned earlier. So, let's fix them.

To confirm this, we can try to block styles.css from downloading at all and see if we have the same results.

ℹ And yea, the same result.

To solve this problem, all my critical CSS needs to be ready when Angular start printing. Critical CSS means :

The CSS of the first page you see when opening a website.

But because I have buttons in the first page that are styled with some custom CSS, this CSS is also considered critical.

Also, the animation I'm using on my website are considered critical too, the video below explains everything :

To resume, we have as Critical :

Now, let's get back to work.

First, I created a SCSS file named bootstrap.scss, and I imported inside it only the Bootstrap component I need

ℹ️ Note : you can import all of bootstrap if you you want to, later I'll explain how we can remove unused CSS using PurgeCSS.

And I did the same thing with SwiperJs, Animations, and my custom CSS

Next, I created a file named combined.scss and imported all the SCSS files I just created 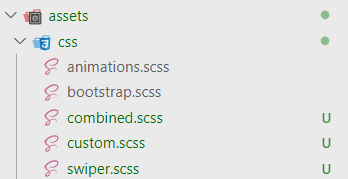 After that, I jumped to angular.json, and under styles[] :

I added the following : 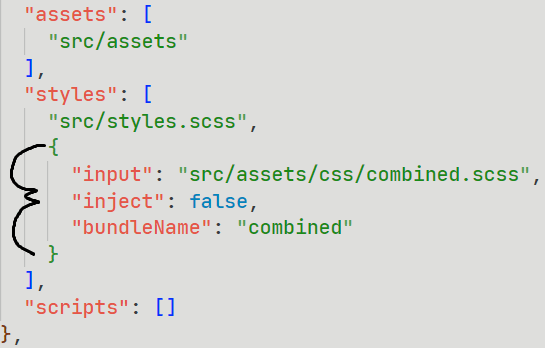 Then, I opened my index.html and added the code below on the top of the <head> tag

What I've done here, is that the second a user visits the website, the first resource to be added to the download queue is combined.scss, this means the browser will start downloading my website resources with combined.scss on the top of the list, thus when Angular starts printing, the critical CSS are already loaded and ready to use.

After building, I had this Lazy Chunk Files section, with my combined.css file there, in reality, I'm preloading, not lazy loading it.

You can also notice that the size of styles.css dropped significantly

Now, thanks to PurgeCSS, I'll try to reduce the size of combined.css by removing unused CSS.

On my command prompt :

After that, I created a file named purgecss.config.js on the root of my project.

And inside it I have the following lines :

ℹ Note : Remember to replace [FOLDER] (within the output property).

ℹ Note : you may notice that I have set safelist to [/^swiper/], That's because I don't want PurgeCSS to remove any SwiperJS CSS. Because SwiperJS will add some CSS classes after the page execution, thus PurgeCSS can't know about them, and end up removing them.

Next, I opened package.json, and edited build from :

Then I created a new script named purgecss :

To build, use npm run build instead of ng build, So PurgeCSS can kick in.

Now, let's take a look on the loading tree : 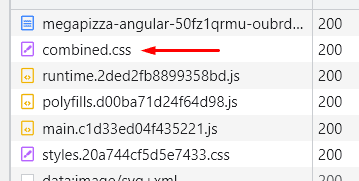 Like I explained before, combined.css is now the first file on the download queue.
The downside of this method is that now we have two stylesheets (styles.css & combined.css), this means one more request to the server, and a couple of milliseconds wasted. Later I'll explain how I fixed this small issue. 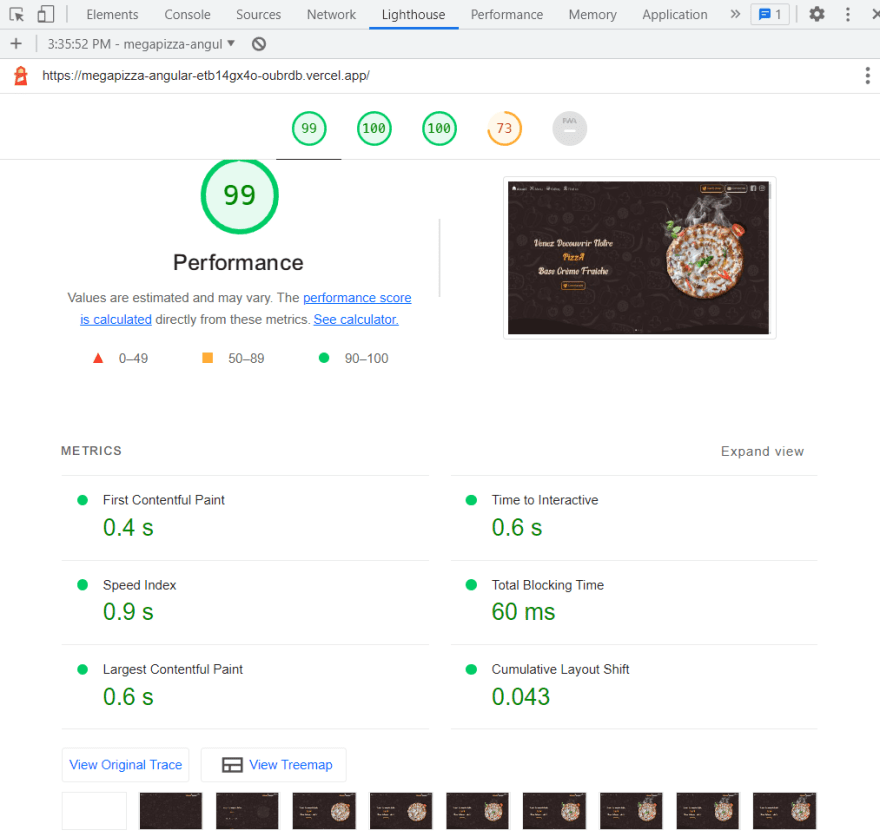 Even if lighthouse is telling me : 'your website is perfect', he is not 100% correct,
What about the Visual problem 2 & 3 & all the invisible problems?

The cause of this problem, is the loading tree, or the order of the resources in the download queue.
Like you maybe already know, browsers have a limit of parallel requests.

Because of that, I need to prioritize my resources. In other words, I need the font & the pizza picture downloaded before other low-priority resources. 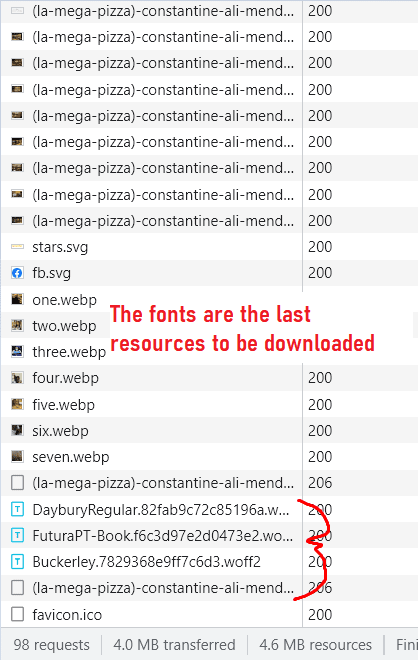 This problem is easy to fix, all I need is to preload (like we did earlier) the font, and the pizza picture.

We start with the font, but first, I need to know the name of the font i used on the first page (DayburyRegular), after that, inside the <head> of my index.html I need to add :

The same process goes for the pizza picture, so inside the <head> of index.html I also need to add :

Go to the CSS file containing your @font-face :

Otherwise the browser will re-download the font (and i don't know why). 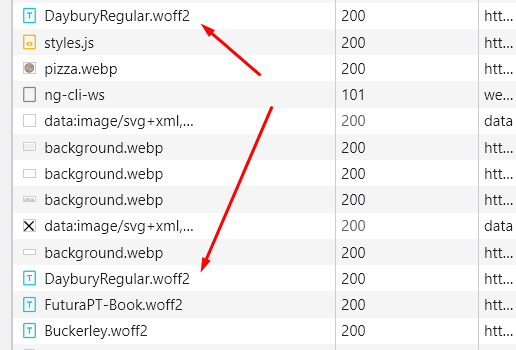 Now, I created a file named pre-fonts.scss, and inside it, I transferred my font from its old SCSS file to this newly created one.

After that, I imported pre-fonts.scss into combined.scss, so its preloads with the other styles. 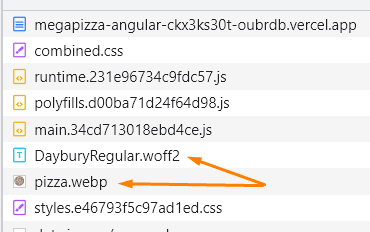 Now, the font and pizza picture won't get late to the party again.

Like I explained on the video, when we lazy load resources that are not visible on the viewport, the other resources (that are visible) will load faster, because now we are downloading for example 10 images, instead of 100.

ℹ️ TL;DR : We only need to load pictures that are actually needed and visible.

The solution is to implement Lazy Loading. There are many methods and techniques, but my personal choice is to go with lazysizes By Alexander Farkas.

But before, because we have all our critical CSS inside combined.css, let's take a look at my styles.css

Poor file, looks so empty.
Since all the CSS inside this file are noncritical, why not just lazy load them with the same method I used when I Lazy loaded LightGallery.

So, inside angular.json, under styles[] I need to modify :

Now, I need to to load styles.css after all the resources finished downloading ( like I did when I Lazy loaded LightGallery)

So, inside main.component.ts, under ngAfterContentInit() and within window.onload I added : 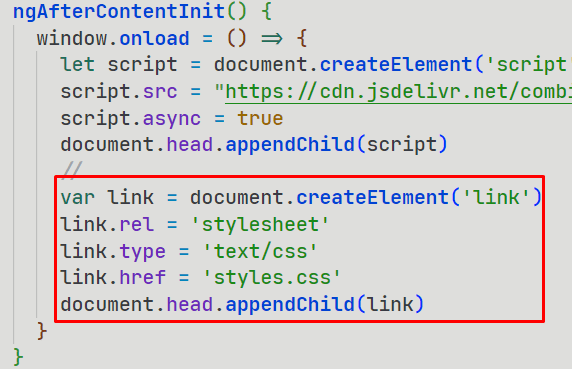 Now let's get back to the problem. I would be very pleased to explain to you how I lazy loaded my website, but this post is already long enough, plus, that's not the main subject for today. So I'll jump directly to the results, however, I'm planning on writing a detailed step by step guide, and link it right here. 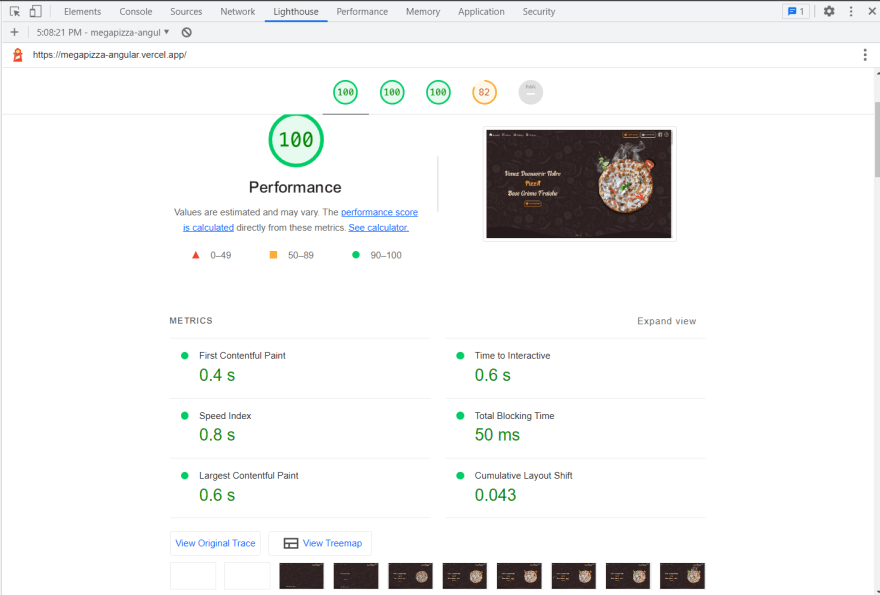 ℹ️ Note : While fixing my visual problems, all the invisible problems are solved too :

You can visit the website after this last step.

You may find mistakes related to my English, maybe I was wrong about some of the things I said, or the way I explained them. Your suggestions and advices are always more than welcome.

ℹ️ Note : I tried to be beginner friendly as possible, which is why you find me a little repetitive and boring in some cases.

How to Build a CRUD Application in Angular 14 +

Improving Performance of Nuxt with Fontaine

Abdjalil Brihoum
Still thinking what to write here.
I made a 'Google keep' clone with most of its features using Angular
#angular #clone #tutorial #webdev

Once suspended, brihoum will not be able to comment or publish posts until their suspension is removed.

Once unsuspended, brihoum will be able to comment and publish posts again.

Once unpublished, all posts by brihoum will become hidden and only accessible to themselves.

If brihoum is not suspended, they can still re-publish their posts from their dashboard.

Once unpublished, this post will become invisible to the public and only accessible to Abdjalil Brihoum.

Thanks for keeping DEV Community 👩‍💻👨‍💻 safe. Here is what you can do to flag brihoum:

Unflagging brihoum will restore default visibility to their posts.