Last year, I wrote about my experiences (and troubles) with the self-improvement app, Beeminder. I decided that, as an attempt to make things actually work this time, I would embark on an experiment. An experiment where I would be the guinea pig!

Beeminder TL;DR: To keep a long story short, you commit to something (Eg. 500 words/day) and Beeminder tracks your progress with that commitment, with the extra added bonus of being able to use APIs to add data automatically. (Such as using Draft for word count, for instance.) For more info, visit the Wiki: https://wiki.beeminder.com/

This experiment was simply recording my progress with Beeminder publicly each week here: https://journal.kim/ and looking at both the objective metrics and numbers, but also discussions (and meandering) regarding being a better person in general, and striving to live a more meaningful life.

All of this to say that, after a year, I'm happy to say that (to my surprise) I actually followed through and stuck with it! There were many failures and setbacks, which I'll get into, but overall I succeeded in doing something that I had failed to do for the past five years straight.

By total coincidence, I began this a month before the COVID-19 pandemic began to cause total lockdowns worldwide. I'm extremely grateful for this, as I definitely would have spent my time in quarantine listening to true-crime podcasts or binging Netflix shows instead.

There are a lot of people like me, who strive for improvement somewhere in their lives, but ultimately fall short or backtrack into their old ways. So, I'm writing this to demonstrate how I managed to push myself into better habits, and an overall more meaningful life.

Though I'll say that I haven't done anything major or life-changing, that wasn't really the point. The point was to make small, positive changes that were permanent, and that eventually became second-nature.

I'll also say this isn't some sort of "miracle app". There is no magic, one-size-fits-all solution that will suddenly make hard work effortless or suddenly improve your life. The reason this worked for me, mostly, is just because I'm a huge data nerd! And having data come from external sources automatically meant that I couldn't just outright lie. I actually have to do the work.

A note before I dive in: I use the word "goal" to describe each individual Beeminder entity, but in reality a more accurate word would be system, since the majority of things are actions I perform daily, rather than definitive outcome. 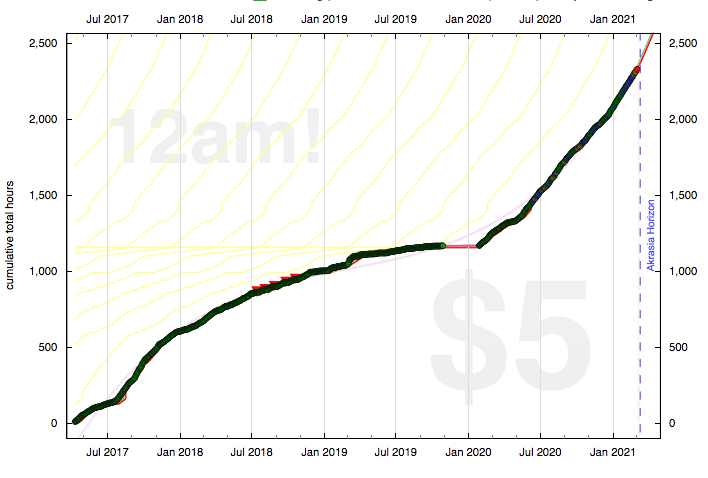 The easiest way to track your productivity--at least digitally--is with RescueTime. It's simple time-tracking that you install on all of your devices and browsers, and that's it! It just quietly sits in the background and then you can check the dashboard to see how you're doing.

The two main goals I integrate this with Beeminder for are:

But taking it even further than that, I also have other goals that are tied to specific websites and software, such as educational sites and note-taking apps to make sure I commit myself to self-learning each day, which I'll get more into later.

And if you're worried about the total lack of privacy--which is a valid concern--I argue that you probably unwittingly hand over even more sensitive data to profiteering companies all the time! At least this one gives you the benefit of helping you in a way.

GOAL: Spend 5 hours a day on productive work when on the computer.

OUTCOME: Over the past year, I've accumulated over 2,200 hours of productive time overall!

But the term "productive" is rather vague itself, and doesn't really mean much, which is why I've decided to dig deeper. As a programmer and a content strategist, it made sense to focus on coding and writing, specifically: 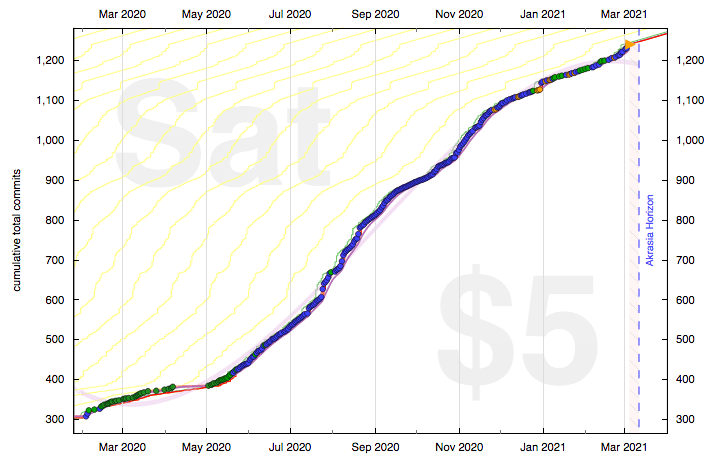 Being a web developer means that coding is an important subset of my overall productivity, and there are several more metrics I use to ensure that I'm working on important projects and issues.

For starters, I use WakaTime (https://wakatime.com/), which is similar to RescueTime, but specifically for tracking what programming languages, operating systems, and IDEs that you're using while developing. It's seriously cool, and I recommend any dev to give it a try.

A more important metric to me, though, is how many commits I'm pushing to GitHub. Since I not only want to code, but show my work publicly, and contribute to open-source projects.

OUTCOME: Over the past year, I've made over 700 commits, and contributed to multiple FOSS projects, my most popular one here: https://github.com/brennanbrown/enjoyment-work 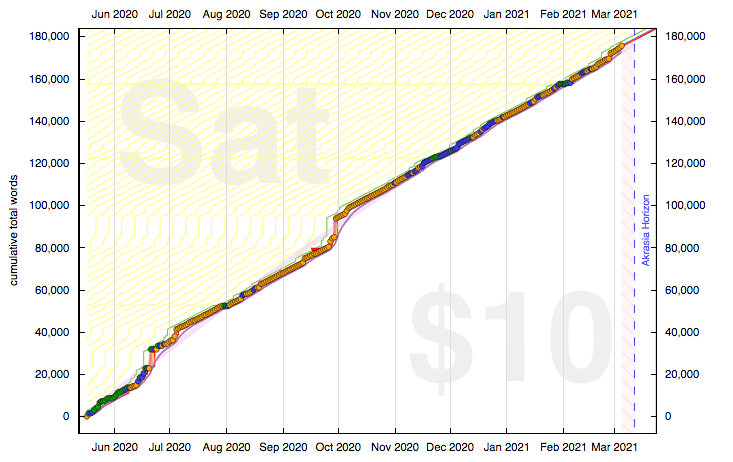 It goes without saying that writing is important to me, and it should be important to you, too! As many others will tell you--even if you're not a fan of writing publicly--it's a great therapy tool, meditation instrument, creative outlet, and a place to just vent safely.

I use a wide variety of integrations for my writing. First, as I said at the get-go, I use Draft to track my raw word count each day. Tracking this one metric has really changed my life for the better.

"Amateurs sit and wait for inspiration, the rest of us just get up and go to work." --Stephen King

Before, I used to only write when I 'felt inspiration' in short bursts, but pushing myself to write 400 words every day no matter what, throws that mindset out the window.

Most of this writing simply ends up as private journal entries, for me to reflect. I've been doing this for about ten years, now.

The other half of this writing ends up becoming something else, though. Whether it's a blog post (like this one) or something more creative, like my poetry. 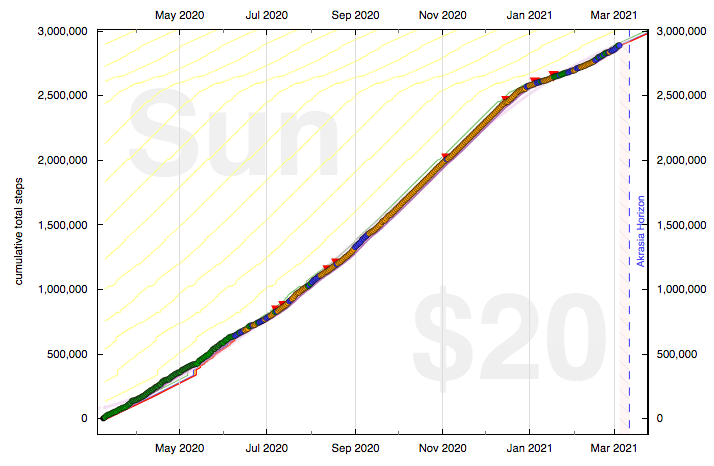 Before embarking on this experiment, I have to admit that fitness and diets are never something that I ever focused on or even thought much--which is half a good thing. To make tracking a lot easier for myself, I got a FitBit, which has plenty of integrations with Beeminder.

For fitness, I kept it as simple as possible, and just focused on how many steps I took per day. Many different sources say that ten thousand steps is a good number.

But trying to reach that goal each day also ended up with unexpected benefits as well. I'd end up going for a long, enjoyable walk each day, and start listening to audiobooks to pass the time! This is just one example of how good habits often snowball into additional good behaviors.

OUTCOME: Over the past year, I've walked almost 3 million steps! Not only that, but I also started listening to a lot more audiobooks because of it.

For diet, I also kept it as simple as possible as well. Counting calories or losing weight didn't seem to be meaningful goals for me. Instead, I just recorded what I ate to gain awareness of what I was eating. Just being mindful of what your diet is, and even just chewing more, helps you appreciate what you have. 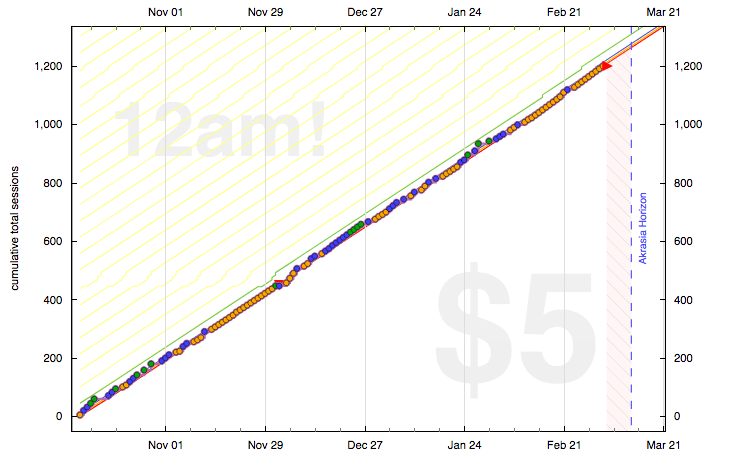 Both mental health and spirituality are more often than not put on the backburner for people, and the consequences of this really were put on display this year during the pandemic.

When I began this year, I started with just the simple act of writing down one single thing that I was grateful for each day. Even with something as small as that, there are a multitude of benefits: https://ggia.berkeley.edu/practice/gratitude_journal

Later on, I also added both meditation and prayer to my daily routine. I was able to track these with Apple Health, Insight Timer (https://insighttimer.com/) and the Electronic Rosary (https://apps.apple.com/us/app/iterco/id489906277).

More than any other goal, these are the most impossible to quantify and it's a little silly to try. It doesn't matter how much you meditate, or how many gratitude prompts you complete, what matters is how you feel and act because of doing these practices. 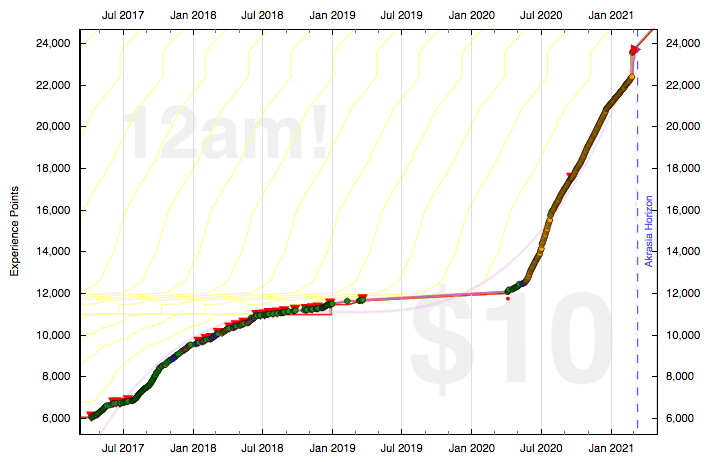 Life-long learning is especially important to me, and being able to self-teach is yet another aspect that the past year has demonstrated to be particularly important to have.

There are a few ways that I approach this. The first is language learning--there are a large amount of tools and apps for this, probably more than anything else. But right now, I just use Duolingo and Clozemaster to practice and learn French.

GOAL: Earn 20XP on Duolingo and 150 points on Clozemaster each day.

OUTCOME: Since I began tracking last year, I've gained over 12,000 XP points on Duolingo, and 25,000 points in Clozemaster!

Of course, you need to actually use the skills you learn for them to meaningful and not atrophy. So, outside of Beeminder, I also keep a hand-written French journal (https://www.fluentu.com/blog/how-to-keep-a-language-journal/), and also watch several hours of French media each week.

Another metric I use for keeping track of my learning is recording LinkedIn Learning courses I take, which I gratefully have access to for free thanks to my local public library. (You might have that, too! Go check)

I also keep my notes to these courses publicly available here: https://brennanbrown.github.io/notes. Though they're currently a little out of date!

Shockingly, even after going through all of that, I only really scratched the surface and talked about half the goals I currently have. If you'd like more details, please visit the blog I built for this experiment: https://journal.kim/ where I've written way too much about the subject. You can also visit my Beeminder account to have a look at everything that I'm tracking.

First: Start Small! When I began, I only had 6 goals that I was tracking. Over the course of the year, I slowly began adding more and more goals as I felt able to maintain and manage them all without burning out and quitting everything all at once.

Second: Seek the Holistic. As of writing, I have twenty-six different goals. In thinking about what I want to track and what I want to achieve, I've tried my best to make sure that I've focused on the important areas of life, as to not neglect aspects in turn for prioritizing others.

Third: No Time-blocking. Unlike a lot of other people, I don't approach this with a specific routine, strict rituals, or even a schedule at all! My philosophy is that: so long as my daily tasks get done before midnight, then it's a win. I call this approach Intuitive Productivity.

8 Google Chrome add-ons to simplify your life (I'm sure).

Building a Livestream App with Flutter 3

Once suspended, brennan will not be able to comment or publish posts until their suspension is removed.

Once unsuspended, brennan will be able to comment and publish posts again.

Once unpublished, all posts by brennan will become hidden and only accessible to themselves.

If brennan is not suspended, they can still re-publish their posts from their dashboard.

Once unpublished, this post will become invisible to the public and only accessible to Brennan K. Brown.

Thanks for keeping DEV Community 👩‍💻👨‍💻 safe. Here is what you can do to flag brennan:

Unflagging brennan will restore default visibility to their posts.