This post contains affiliated links and I would really appreciate it if you purchased any of the devices/items mentioned in this post through their respective link, if it makes financial sense to do so. 😄

In this post I’m going to show you how you can turn a drab-looking webcam video feed into one that will have people you know talking. The solution that I propose could be used for a multitude of reasons, like: remote conferencing, “talking head” style video tutorials, and even live-streaming on Twitch or other platforms. The possibilities are up to you as a creator of content and how you choose to use it. Minus the green screen, I basically have all the parts to run my own Twitch channel, minus the skill and the audience… 😅

Over the years and having worked semi-remote at a few companies, I’ve migrated from built-in camera and mic for meetings, to using an external webcam to better display my face and surroundings, then later incorporating an external microphone for better audio. Once I reached a happy medium, I didn’t really tweak my setup. Before I started on this journey, my initial setup included:

This setup worked for me, but the I noticed on particularly bright days that the webcam video quality would get washed out. This is mostly due to my desk being directly in front of a window due to space constraints in my home office. After living with this for some time and tweaking the Logitech camera settings a bit to try and make it slightly better, I decided that upgrading my camera was the only option and necessary to improving the video quality any further.

My original setup, with just the Logitech C920, looked something like this image: 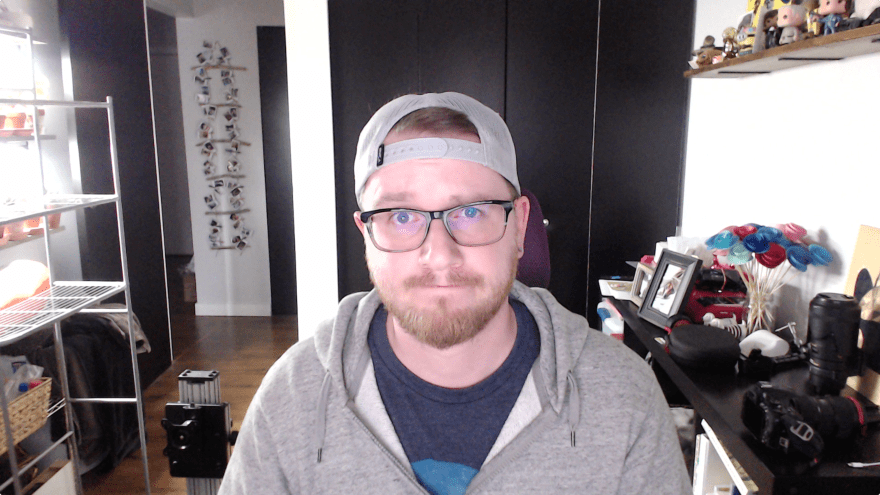 and with a new camera and some dimmable bi-colour LED lights and diffusers, I turned it into this: 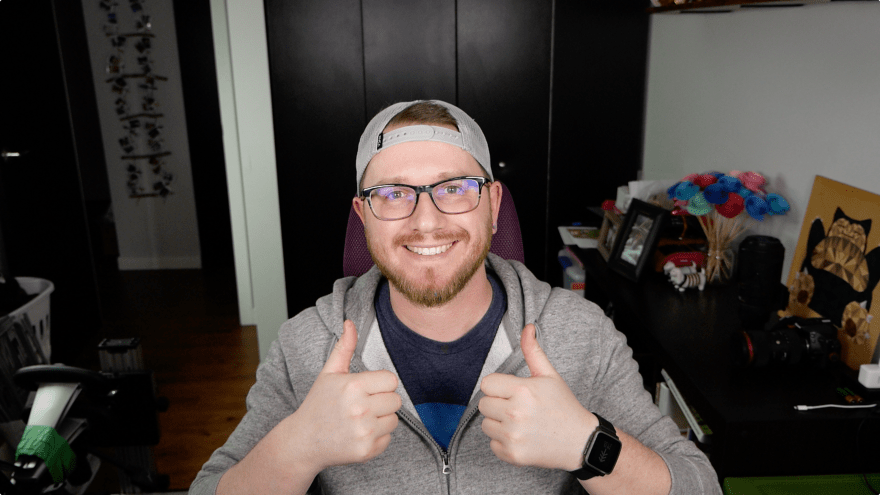 My current setup is running macOS 10.14.6 Mojave on a MacBook Pro 15” 2018 (supplied by my employer), so your mileage may vary using another machine/operating system. As far as where I learned any of this, I owe a lot to a video from one of my favourite YouTubers DSLRVideoShooter, this post by Matt Stauffer, and the setup that Kent C. Dodds uses.

It also helps that I was already interested in videography and identify as an amateur photographer, so I understand the importance of light in a scene, the quality of the glass on the camera, and the capabilities of the camera sensor.

Below is a list of parts I’ve compiled based on my Amazon order history for this project. I bought everything roughly around the same time to put this all together.

A DSLR or Mirrorless Camera

For this project, I used a Lumix G85 mirrorless camera which I already had for videography, but you can find other cameras that will also work so long as they have an HDMI output. You’ll also want to pick a fairly light (in weight) camera as large bodies with bulky lenses will potentially cause unnecessary strain on the parts holding it up, and you don’t want them falling randomly in the middle of the night onto the floor from this height.

A large factor in the decision to purchase a camera is whether or not it has HDMI-out, and also whether it offers a “clean” HDMI feed. You may also need an adapter from HDMI to mini- or micro-HDMI for your camera. Another factor is whether you want to use a battery or purchase a “dummy battery” for it and have the camera powered from an electrical outlet.

Once you’re able to connect an HDMI cable to your camera somehow, be it through an adapter or a dongle, move onto the next section. 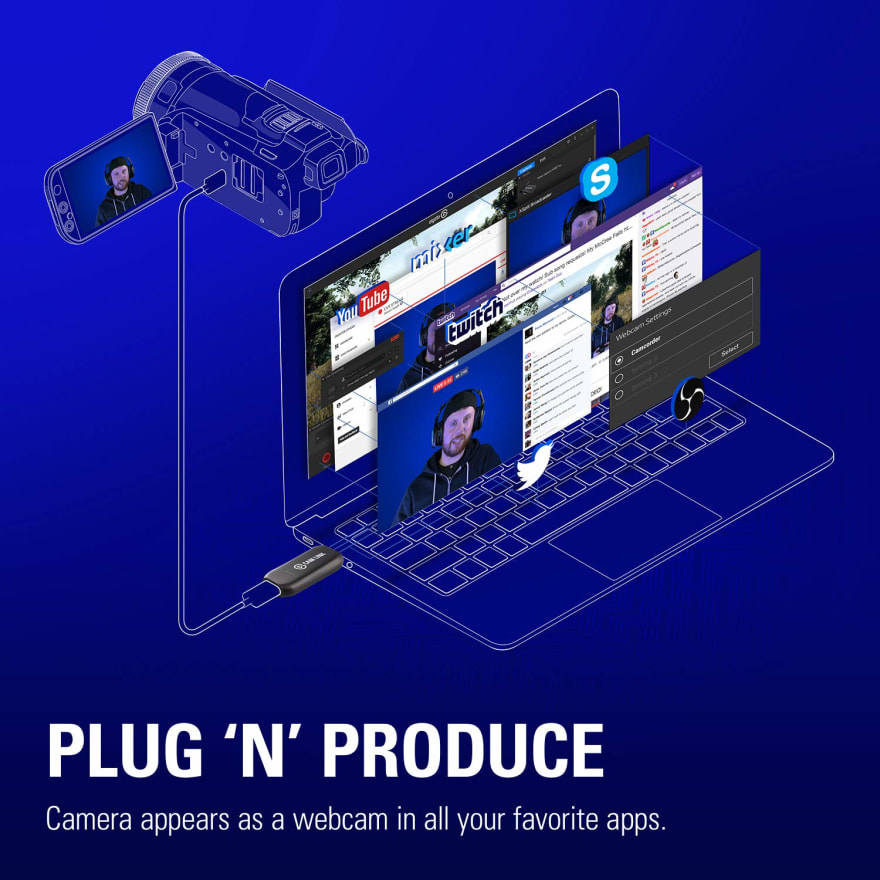 The one piece of tech that allows us to use the camera like a webcam is the Elgato Cam Link 4K which I picked up recently. It’s a bit pricey, but the functionality is what makes this a great buy: virtually any HDMI signal you plug in to the Cam Link will show up in your settings as if it were a USB webcam 🤯 with no extra software required.

The way it works in practice: plug the HDMI cable coming from your camera into the HDMI port on the back end of the Cam Link 4K, then plug the USB end into your computer. In my case I need a USB 3.x to USB Type-C adapter for this.

I was able to get it to work reliably when plugged into the USB 3.x port on the back of my Dell U2718Q monitor and have the USB upstream cable connected directly to a USB 3.x port on my MacBook.

In order to test that the camera is working with the Cam Link 4K, open up Quicktime and create a “New Movie Recording” (File > New Movie Recording). This should open up a recording window which might show your Facetime camera by default, or whatever your default webcam is set to. If your camera is turned on, connected to the Cam Link 4K which is connected to you computer, then you should be able to select it as the “Camera” that Quicktime will use. 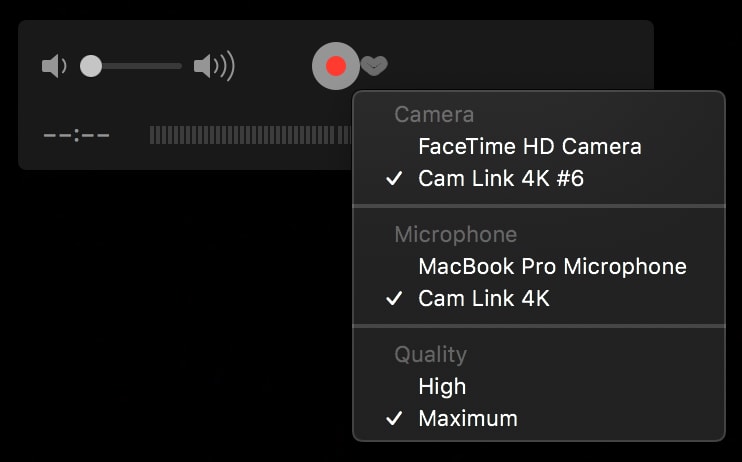 Mounting the camera for the best angle

Generally speaking, getting the camera at or slightly above your eye line provides the best angle for remote meetings. This means we need to get the camera on top of, or above, the main screen you will be viewing. I have a dual-monitor setup so this meant getting the camera above my main monitor. To do this I employed the used of my single monitor desktop mount and removed the VESA mount from it. I then removed the mount that the VESA plat attaches to leaving a hole in the arm large enough to get a screw through and attach the monopod extension pole. Here is a video describing very similarly how it is done (without having to drill a larger hole as my monopod extension arm had a 1/4-20 thread and the screw for it fit through the hole without modification). 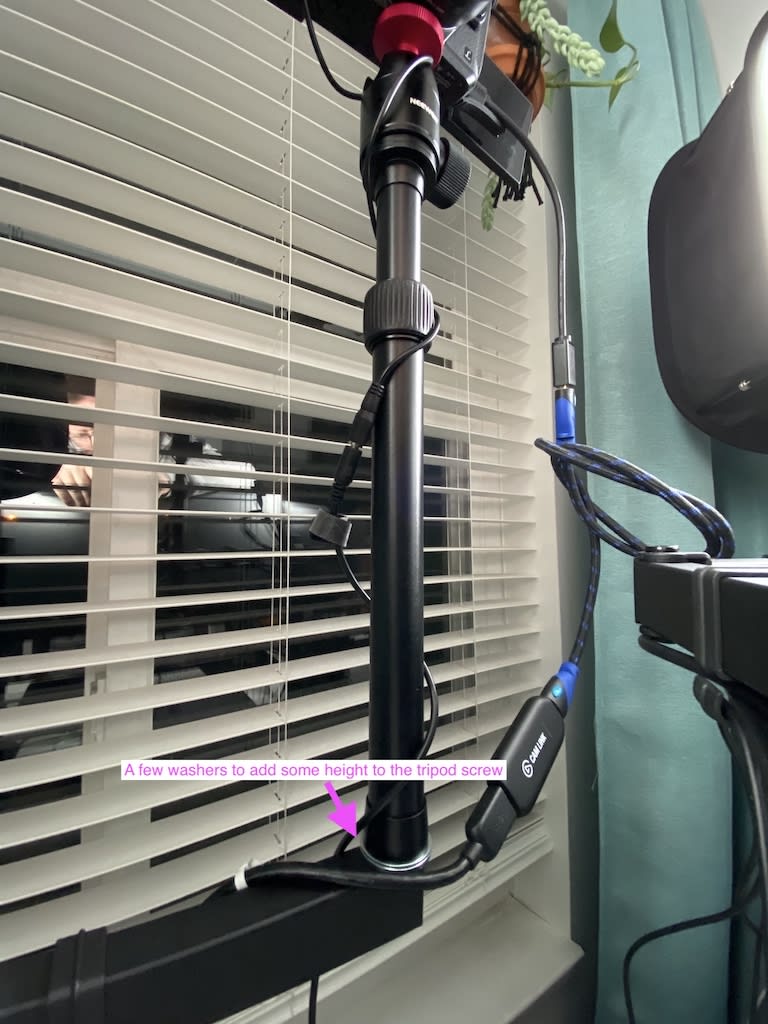 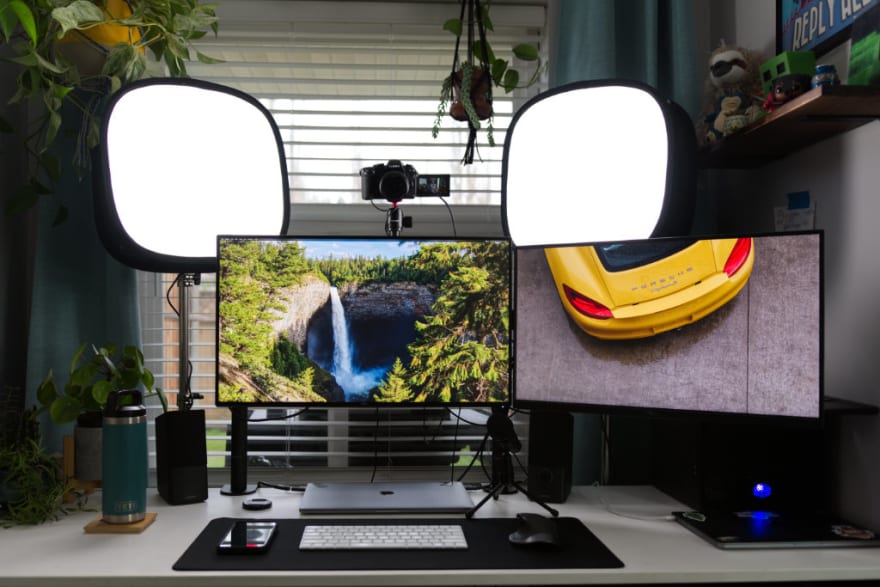 Though I already had a set of friction arm mounts and used one temporarily to mount the camera while waiting for parts to arrive, this 11-inch adjustable articulating friction arm is the preferred purchase now should you choose to use this instead of the monopod extension mount.

Lighting is one of the most important aspects to achieving great video quality. I probably didn’t have to splurge and upgrade from the Logitech C920 because if I had a better control of my lighting, the camera sensor wouldn’t have to work so hard. A well-lit “scene” can be what makes or breaks it for your camera, and better lighting will always produce a better result, no matter the camera you use.

The LED lights and diffusers that are used in this post were purchased previously and came with their own stands, AC adapters and cables, but not the diffusers (which I purchased later). If I were ordering them now, I would purchase some Elgato Key Lights. Alternatively, you could attempt to make your own.

Any of these choices will significantly increas the quality of your voice! These microphones will make it easier for participants to hear you and can even produce some praise from them over how good your voice sounds. Marco Arment has a great article covering a wide variety of microphones that he has personally tested and provided feedback on for podcasting but all of which would work here.

You’re not limited to microphones either, you could simply purchase a USB wired headset and call it a day. For some, this might be more convenient than a dedicated microphone as well as you can wear it while having your hands free to type, and wherever you move your head it won’t affect the direction of your voice into the mic.

Improving my code through refactoring

The creator of world's most popular JS Framework

Brandon Brown
QA Developer @ Echosec, Dev @ Battlesnake
The Best VSCode Extensions for Web Development in 2020 How to setup XAMPP-VM in MacOS Setup Sonarr and Radarr to notify via SMS with Twilio Runtime