Decentralization is the key attribute of Blockchains. However, it is interesting to note that since no one is in control of managing the Blockchain, that is, no one can take any individual decision rather its member or community-driven, and everyone weighs equal and have equal right to say, blockchains are politically decentralized. Similarly, no one institution or person that is putting up the entire infrastructure or set of machines\nodes that form a right Blockchain, instead it’s the node that is becoming part of a network on their will by putting up their machines or infrastructure, Blockchain networks are truly architecturally decentralized, which simply means there is no single point of failure and member can leave whenever they want and even then network would keep running. The best example is Bitcoin, which has been running for the last ten years with no company or person responsible for creating or managing the Bitcoin network.

Content Delivery Network (CDN) is an example of logical decentralization. A CDN maintains and stores the cached version of its content at multiple locations spread across geography. Every time a user request for content on the World Wide Web, it’s generally gets served from CDN, and if data is not found that it would connect to the origin server and get the data. So, there is no single machine or node that maintains the complete set of data that is required to be served; instead, it can get the data to be served.

The following image represents how a CDN works and how content is presented to the end-user; in the figure, we could see that content is being presented to the end-user through the Cache Server to help to reduce the load time of content. And only in the case, if the content is not present in the CDN, then it would go back to the origin server to get the data, and even once it gets placed in Cache Server, then further requests shall be served from there. It shows how logical decentralization is achieved by making sure that content is distributed across the servers and how that helps achieve low latency for end-users: 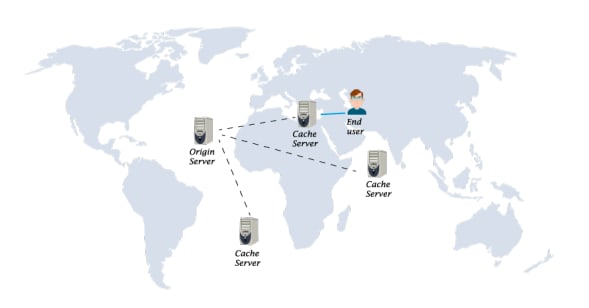 In Blockchain, every node maintains the full copy of the dataset. Hence, they are not in real sense are logically decentralized, that is, they do maintain a commonly agreed state that is replicated across all computers and hence behave as a world computer.

Introducing Gelato V2, The Most Reliable Way To Automate Your Ethereum Smart Contracts

BPB Publications
What Is Bitcoin And How Does It Actually Work?
#bitcoin #crypto #blockchain #cryptocurrency