Recently, I took on a project that involved building a Figma plugin to generate a property pitch report from data about a property collected by employees, mostly aggregated on a central Wordpress instance. For the unfamiliar, Figma is a neat web-based tool for collaborative design, featuring a very robust set of APIs, which made choosing it for automating the property pitch report process a pretty obvious one.

In this post I'll write about approaching the Figma plugin API and leveraging it to automate aggregating data from various sources to generate a baseline report that can easily be customized further! 🔌 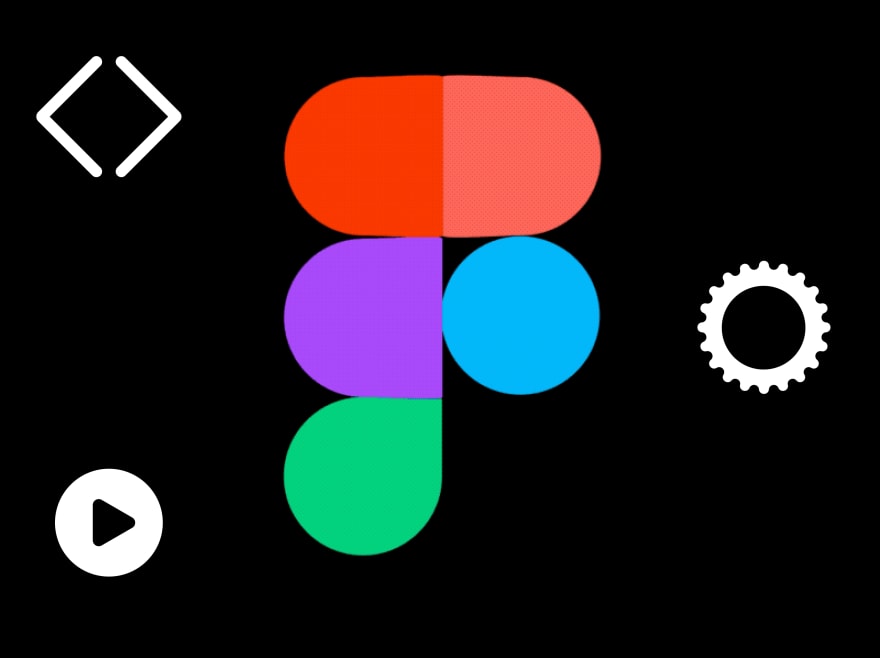 This plugin would have to be able to:

As far as implementation goes, this posed a few problems when using Figma Plugins - read on for more details!

To start off I am going to give a quick overview of how Figma Plugins work. This is also covered in "How Plugins Run" from the official documentation,
but for some reason it still took me quite a while to figure things out, so I'll explain it slightly differently here: 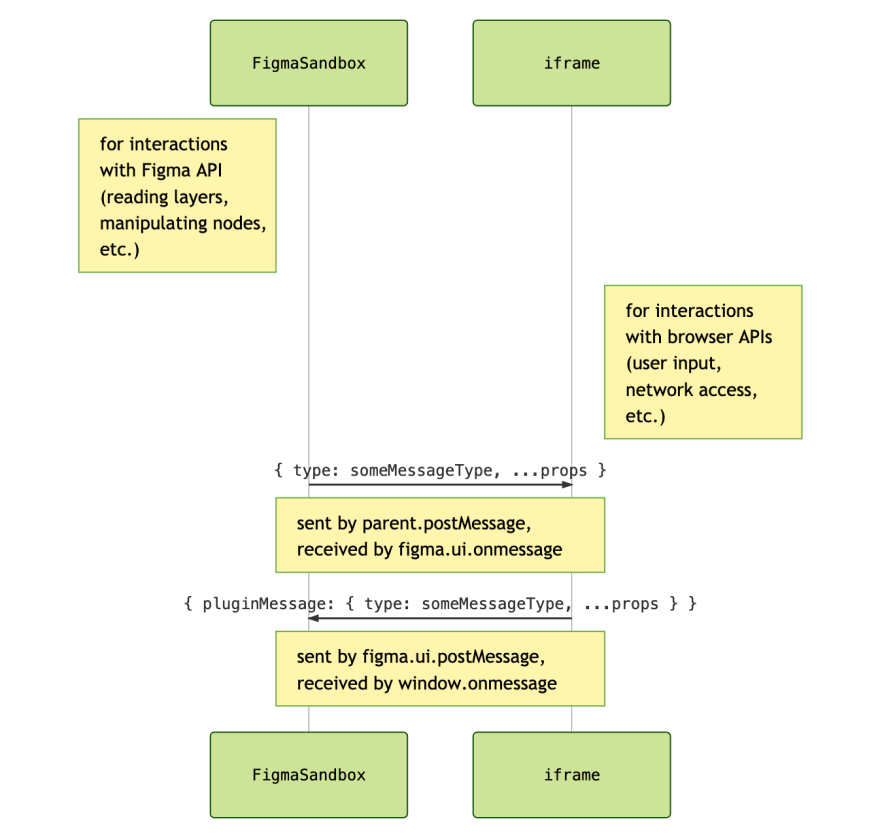 Sometimes the FigmaSandbox is referred to as the "main thread", and the iframe is also called a "worker".
The "why" of this setup is explained in the official documentation:

For performance, we have decided to go with an execution model where plugin code runs on the main thread in a sandbox. The sandbox is a minimal JavaScript environment and does not expose browser APIs.

That means that you'll have two components to your plugin: a user interface that has code that runs in the iframe, which also handles any browser API usage (any network requests, the DOM, and so on), while any code that does the actual work of handling interactions with Figma (reading layers, manipulating nodes, setting views, and so on) runs in an entirely separate FigmaSandbox. The only way these two can communicate is through message passing via the Figma plugin framework, as described in the above diagram.

This means that to build this thing, we'd either have to:

We ended up going with the second option, which lended itself to a more compartmentalized approach, as outlined below: 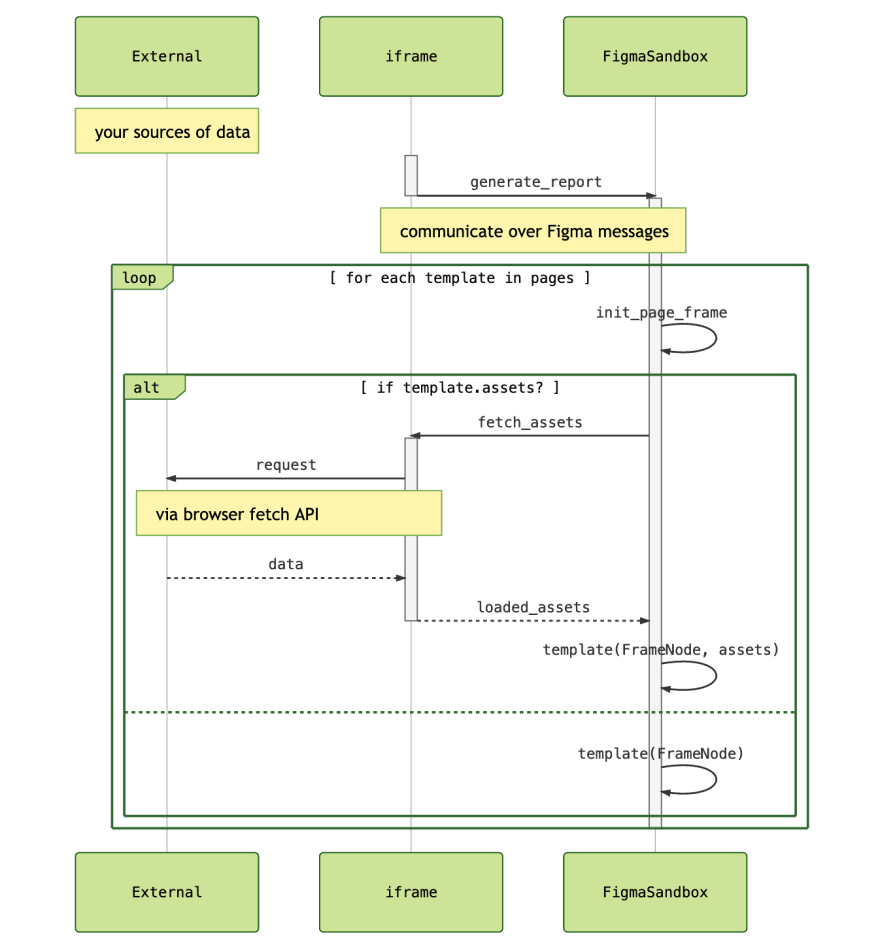 The following sections cover the iframe and the FigmaSandbox and the outside world in more detail, complete with examples!

Collecting Input and using React as our iframe

The template sets up the iframe part of our plugin as a Typescript-based React application, which is handy because Figma provides an API typings file that saved me a lot of time. Inputs in the template are collected in standard React fashion with some hooks:

And later, in your JSX:

There are a number of ways to do this, so just use whatever you prefer! Once you've collected your parameters, as denoted in above diagrams, when the user kicks off the report generation process we can fire a messsage to the FigmaSandbox via parent.postMessage:

To enable bidirectional message passing (in our case, to enable asset loading on the fly), we'll need to hook onto incoming messages to the iframe via window.onmessage:

Remember that browser API access requires being in the iframe, so any network requests and so on should probably happen in one of these window.onmessage handlers.

Manipulating Figma Nodes and Working With the FigmaSandbox

Similar to the iframe, the first step is to listen for messages, this time via figma.ui.onmessage:

Since we have no UI component in the FigmaSandbox, this code can just be plain Typescript.

Unlike the iframe, the actual Figma API is accessible to the plugin here via the figma object. For example, to set up an A4-sized frame for each page and set your view onto them:

Working with nodes is pretty straight-forward: like any other graph-like structure, each node represents an element (in this case, an element on your Figma document), and attaching them to other nodes gives your elements a bit of structure. Each node exposes a variety of configuration options. For example, see the TextNode definition from the Figma API typings file:

Refer to the typings and official node types documentation to find out what you need!

Recall from the earlier diagram that for our templates to declare asset dependencies, a bit of ping-ponging needed to happen between our iframe and FigmaSandbox components to make the appropriate network requests.

Here is an example of a simple template function (which is our way of organizing page generation - feel free to use whatever system suits you best!) that allows the declaration of some dependencies. Our interface is described as follows:

Note that in the template function, assets is a simple key to string value dictionary, while in the assets property, the function returns Assets. This is because Figma images are referenced by a hash - once we have image data, it is easier to simply store the images in Figma first before passing the identifying hashes as values in the asset dictionary to the template function. For declaring assets, a bit more detail is needed - hence the Assets type.

In our FigmaSandbox message receiver, we'll have to check for asset dependencies before calling the template function:

Then, back over in the iframe message receiver, we'll want to retrieve these assets when requested:

Now, back to the FigmaSandbox again (woo! ping pong!), we'll want to put all this image data straight into Figma to avoid moving all this raw data around, and generate our template!

For the example template, this back-and-forth results in a page that looks like this:

If you find this example hard to follow, try and read through it again and match it up against the plugin sequence diagram illustrated previously - each action should more or less align with the arrows on the diagram. It definitely took me a little while to get the hang of as well 😅

The Figma plugin documentation is quite robust (except for loading images and a good way to do the back-and-forth described in the above example, which I had to spend a good amount of time figuring out for myself), and feature-wise it's pretty comprehensive as well. If your team has any sort of design needs, I would highly recommend looking into automating some of your processes with Figma!

That said, it can be a bit of work to do seemingly trivial things (at least at first), but when you get the hang of things you can do some pretty cool tricks with it - I'll probably follow up this post with another one about the map generation work I am about to do!

As an aside: the charts in this post were created with Mermaid, which I recently (re)discovered - very nifty.