Working on a large codebase, it’s pretty normal to not remember every small or large subsystem or implementation choice. Be it whether you’re new to a codebase, or you’ve been focussed on a specific area of the codebase. When working on refactorings or bug fixes, I often end up in areas I might not be too familiar with. Generally not dramatic, it happens quite often that I’m stopping at what I’m doing because I need to decide on how to move forward. As software engineers, we have to make so many micro-decisions every minute that we’re pretty used to it. Depending on the code and domain knowledge, we often find ourselves in situations where we need more context to make an informed decision. Tests usually provide a pretty good context but depending on their granularity and naming, they might only tell is “what” is in the implementation but miss the “why”. And if we try to decide whether we can remove a certain check or rework a behavior, we need to understand why it was introduced in the first place. Usually, we resort to looking at the commit that introduced the change or the tickets associated with the commit.

Most people will start with using git blame (or the respective functionality within their IDE/editor). But on most non-trivial projects, you usually end up with a refactoring commit, a rename, or a trivial cross-project fix like switching to another assertion library. At first glance, we only see the most recent changes, not the most important ones. We need to carefully remove layer by layer of sand and dirt that has been swept over the real changes to unearth them.

A simple git blame shows us only the most recernt changes. Assuming it’s a simple move within the file or a whitespace fix, we can ignore those using the flags that git blame offer us:

The above flags are already useful. Most of them are not only available on the command line though, they’re usually available in the various editors as well (feel free to show how it’s done in your editor and share on Twitter). 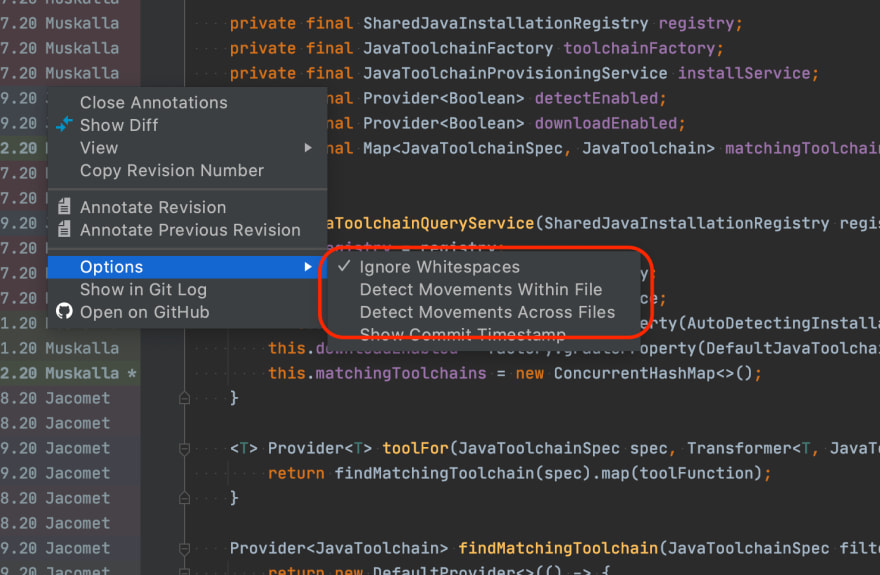 Usually, this allows to hide some of the more trivial commits but requires git to detect them as such. More often, we (as engineers) can easily gauge whether a commit is relevant for our search based on commit message, author, and coding practices. Luckily, this can also easily be achieved by the various editors by moving backward commit-wise. Looking at the history on GitHub, you can use the “View blame prior to this change” feature:

Similarly, IntelliJ-based IDEs allow you to do the same using “Annotate Previous Revision”: 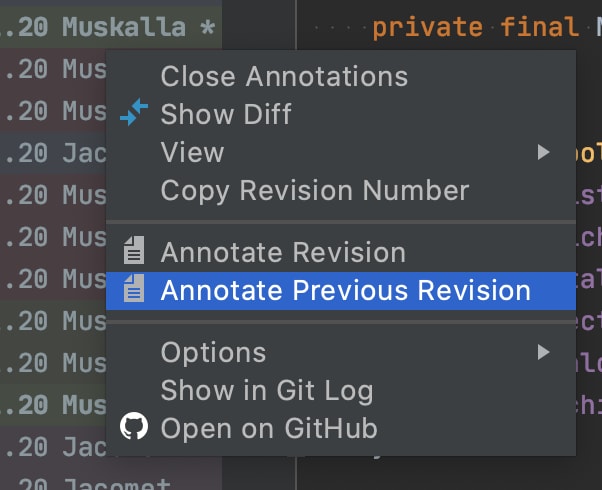 Depending on what we’re looking for, we may not want to uncover commit by commit until we find the initial commit that introduced something. Let’s say that we’re working with a customer who sees a specific error message on an older version of our product. On main, this error message is not present anymore as somebody refactored the code already. To dig into this, we’ll have to find out when this error message got introduced. One way to pick through the whole history in the search for the holy grail..err..the error message is to use git pickaxe. Pickaxe is part of git log can be used as follows

By default, it will spit out all commits that introdcued or removed the the string errorMessage in any way.Especially with error messages, you may be looking for an error message template that has variables in there. Luckily, git has us covered: you can use --pickaxe-regex and use -S<regexp> to find matching commits. Be aware that using -S will only find commits that change the number of times a string is found (addition/deletion). If you’re also looking for a commit that changed the position of a string (e.g. a refactoring that moved the keyword around), you are better of using the -G:

Whether you move forward or backward through history, there will always be the “big bang” refactorings that get in your way. Be it that your team decided to agree on certain line endings, a large split of the codebase or a rename to align the codebase with the ubiquitous language. So these changes are usually never interesting in the context of wading through the history for a specific line and Git has some neat features that allow us to skip those when looking at git blame for a file. The simple approach is to pass all commit ids that we want to ignore using --ignore-rev as the following example shows. Given this history for a file, consisting of the important change as well as a commit that just refactored the file:

As expected, regular git blame shows the most recent changes on the file. This is the commit reformatting the file which is irrelevant for us. We want to see an important change.

So using the “ignore revisions” feature allows us to explicitly ignore specific commits, thus showing us the commit we’re interested in:

Throughout the lifetime of a project, this approach certainly doesn’t scale. There will always be commits that should be ignored in those cases. Based on the same approach, git blame allows you to specify a file that contains a list of commits to be ignored. This is not only handy as you can check it in with all your other files, but it’s also easy to share this within your team so everybody can leverage this as well. In our example, let’s call it .git-blame-ignored-revs and specify which commits should be ignored using their commit hash. You can use # to add comments to the file as well.

You can now manually use this file as your source of filters using --ignore-revs-file.

If you want this to be the default behavior, you can either create a git alias for this or even configure git to always use this file. With this configuration, git blame will always ignore the commits in .git-blame-ignored-revs:

A nice side-effect of using git config is that other tools and editors that rely on the command line tools behaviour just fall in line with these settings. For example, IntelliJ IDEA shows the “Important Change” when enabling annotations:

Different problems require different approaches. Whether you’re looking for an error message that is long gone from the main branch or try to peel back the layers for some new code, git offers a tremendous amount of tools for your needs. Sometimes it is enough to remember that certain tools or approaches exist so you can look them up if you decide which way you want to approach your search:

I hope I was able to show the one or other interesting bit that can you add to your own toolbox and would be happy to hear about your approach to software archeology.

How to Build and Deploy Your Static Site, Fast and Free!

Writing from the hospital and bored, suggest me something to do