This is a translation of bmf-techを支える技術.

This article writes about my blog, bmf-tech.com.

Scratch and mange the my blog

Write about the tech stack behind this blog bmf-tech.com.

First of all, the current bmf-tech is about the configuration one generation before. 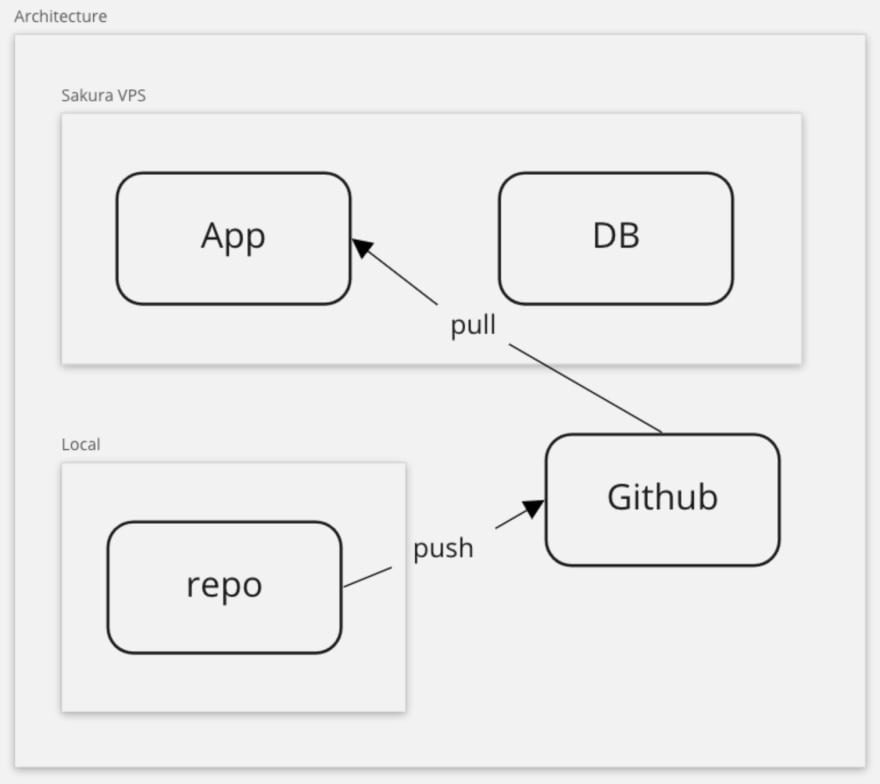 Rubel is the first self-made CMS that was used in the previous generation.

I don't remember how many years this was in operation, but I think it's probably 3-5 years.

Before using Rubel, I created an original theme with Wordpress and operated a blog.

I checked the domain age of bmf-tech.com and it was acquired on November 2nd, 2015.

I forgot when I started blogging, but based on the domain age, I've been operating for nearly 7 years.

Regarding the current bmf-tech configuration.

There were several reasons for wanting to replace the system.

For these reasons, I roughly considered the design policy of the new system.

The architecture configuration built based on the design policy is as follows. 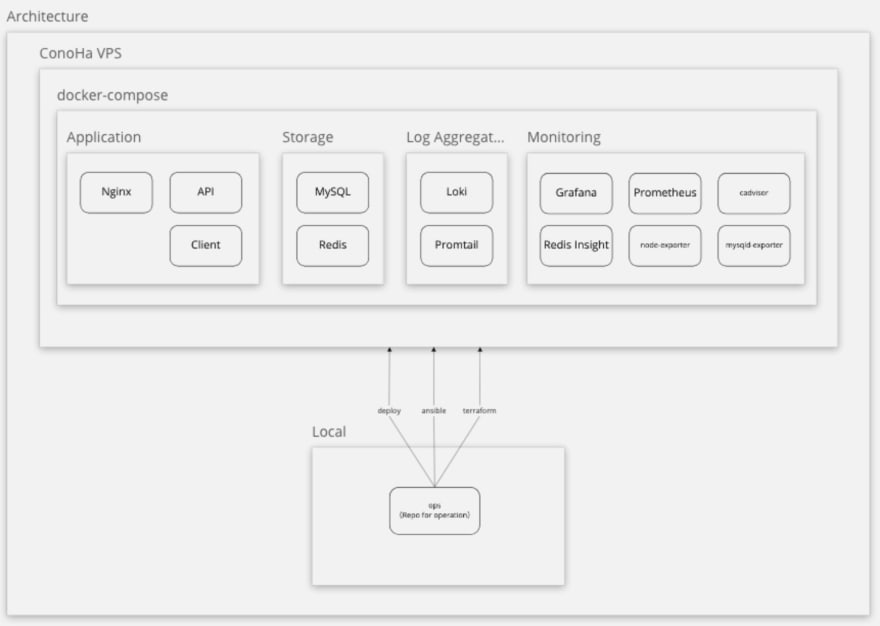 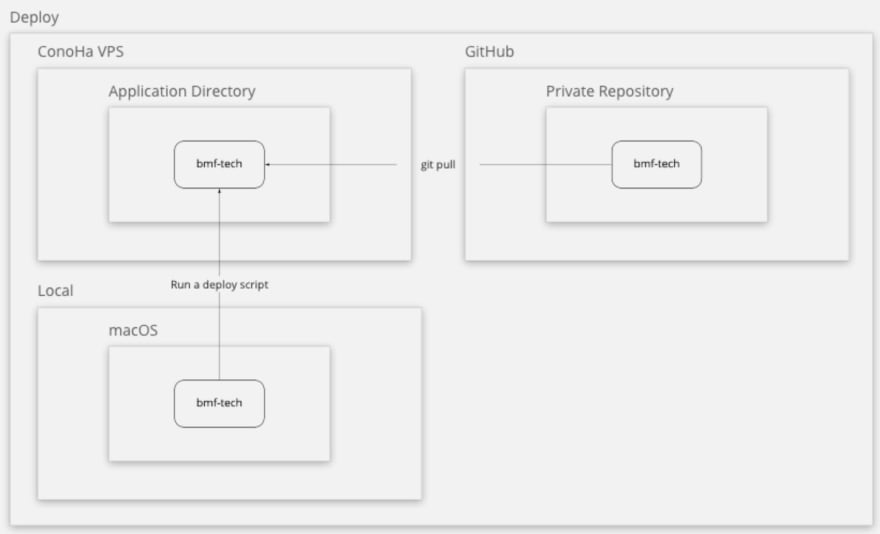 Below is a diagram showing how the source code management is based on the container configuration. 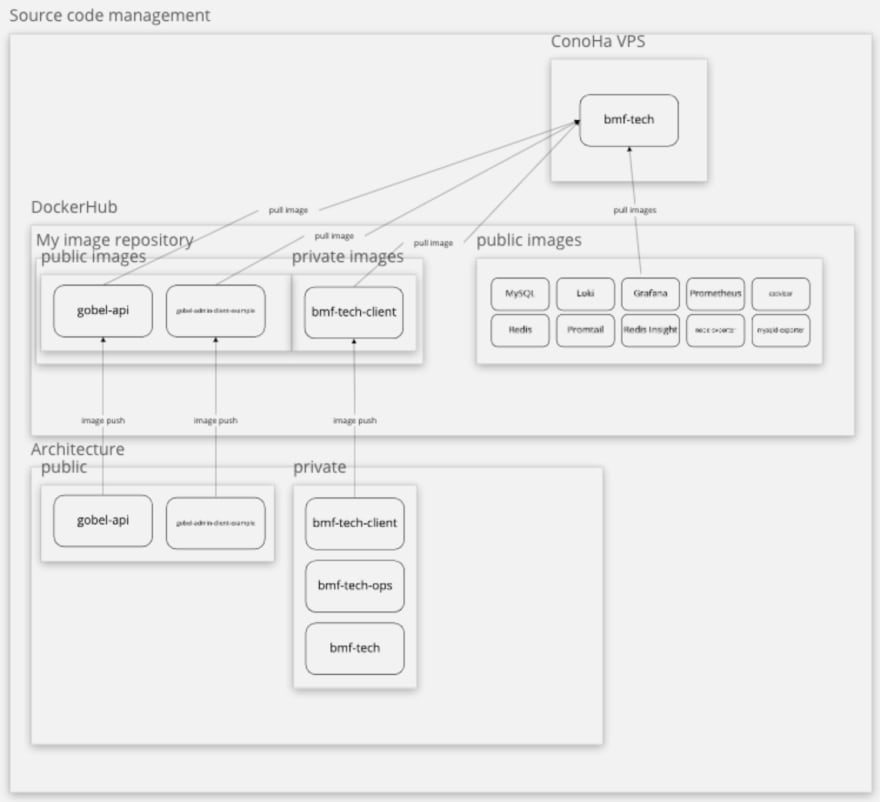 About each application of API, Client (user side screen), Admin (management screen).

Basically, it inherits the DB design of Rubel as it is, but there are some parts that have been redesigned by reviewing logical and physical deletion.
After that, it feels like reviewing the data type and size of the column.

Since there was no big difference in DB design, we were able to implement the migration tool in about 2-3 days.

During release work, migration to the new environment is completed simply by switching DNS.

After confirming that there were no problems after operating the new environment for about a month, the old environment was deleted and the contract was terminated.

Summary of what I made

I will summarize what I made before releasing the new bmf-tech.

While making the above various things, I was writing on my blog, doing LT, and doing other things, so I spent a lot of time on the release of the new bmf-tech.

There were many times when I stopped working on development, strayed from the path, and hesitated about switching to Wordpress or another existing system several times, but I was able to operate it safely and it was a burden on my shoulders. went down.

I have a lot of issues about what I haven't done and what I want to do, so I'd like to deal with it as a hobby in my spare time.

Rather than just creating, I would like to refine how to create and how to operate, so I am thinking of investing through this blog system for that purpose.

The reason why I run my own blog is that there is a strong element of learning.

We believe that we can continue to operate the current system for the time being, so we will continue to do so patiently.

Take your development environment anywhere and on any machine with Dev Containers.

Once suspended, bmf_san will not be able to comment or publish posts until their suspension is removed.

Once unsuspended, bmf_san will be able to comment and publish posts again.

Once unpublished, all posts by bmf_san will become hidden and only accessible to themselves.

If bmf_san is not suspended, they can still re-publish their posts from their dashboard.

Once unpublished, this post will become invisible to the public and only accessible to Kenta Takeuchi.

Thanks for keeping DEV Community 👩‍💻👨‍💻 safe. Here is what you can do to flag bmf_san:

Unflagging bmf_san will restore default visibility to their posts.