What if in this age of YouTube it is so hard to learn programming despite having so many resources? But it is also true that seeing so many thousands of resources is mind boggling. 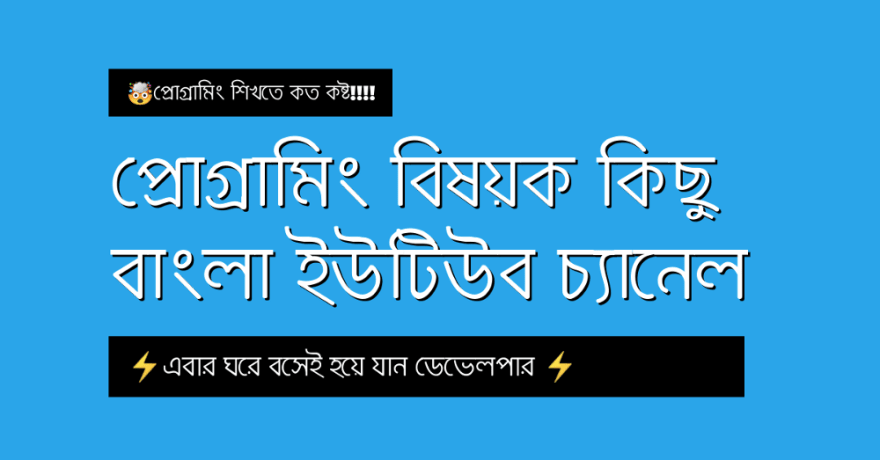 So someone asked me to suggest some channels. I have subscribed to so many places that the real channels are hard to find. After a lot of fussing, I came up with some channels that will not feel boring at least.

Many channels have escaped my notice, and many channels have dropped out because of the discussion about income or outsourcing (although the name of the thing is supposed to be freelancing) instead of teaching.

Also, a few channels are a bit out of programming but I think it needs to be on the list, so I kept it. I have tried to keep those who have published new videos in at least 1-2 months. Even if newcomers learn programming videos from 3-4 years ago, they will have to face many problems.

This list is mainly about JavaScript, C, Python, PHP, Machine Learning. What is written in the post is completely my own opinion, sorry for any mistake.

His content is popular on many topics including education, programming, love, romance, web design, career, Google, Facebook. He has also written several remarkable books, including Recharge Your Down Battery, Paracetamol of Paramoy Life, Fourteen Groups of Programming, Programming for Hubbles.

His channel has a lot of videos about algorithms and data structures, topics that the rest usually discuss a little less. You will see him create courses on many topics, including "Introduction to Python", "Chalk in hand in programming".

He has written many books, including "Programming Essentials - Python 3", "Coding Interviews: Preparation, Problems and Solutions", "The Wonder World of Programming", which can be found on Rokmari's website .

More time has been spent on the back of his books than on that channel. You should read his books first, then watch his channels, blogs etc.

⚡️The channel was previously called Twinkle Cats. The videos here have been explained in very nice fluent language. There are hundreds of videos on many topics including JavaScript, React, C etc. He has a lot of long videos with career guidelines. A lot of time has been spent behind each video.

He has recently created a platform called Stack School , where many courses can be found. I have always been interested in bootcamp type classes in Bangladesh.

There is nothing new to say about Hasin Bhai with PHP. He has made many videos on WordPress and Laravel. And in the last few videos Enginex has discussed important topics including load balancing.

May be surprised, he created and uploaded a C ++ tutorial using XP 6 years ago. Subsequent videos are Python related. There are more than 350+ videos on his channel right now.

In recent videos, he has made many videos about competitive programming (a competition for fast programming in straight Bengali).

👀 C ++ videos are a bit old, so his new videos might be more interesting to watch than those.

Here you will find some videos of a video meetup called #theTechTalk. You will also find videos on many topics, including Journey to the Front and Development, Laravel.

👀 If you go to the website of Let's Learn Coding , you will find the previous videos. And you can peek into the channel for the rest of the technology chat.

Machine learning with pen in hand

He has written books on many topics like Python, Psy Kit, Deep Learning, etc., along with numerous video tutorials. Those of you who are interested in studying machine learning should not miss this channel.

Not to mention Nafis Nihal's book Machine Learning Algorithm with his book . There is not much talk about machine learning in Bengali yet, so subscribers are a little less.

You can understand by listening to him that he spends a lot of time for each video. Each video is very informative and professional. It's like watching a presentation and subscribing to the channel. There are many nice videos on WordPress customization, themes and plugins will come in handy for development.

👀 Since his videos are related to WordPress, it can often be felt that his videos have a little more emphasis on PHP, JQuery, etc., and very little programming content. Many people may not like it when it comes to learning programming. But those who are struggling with WordPress, should watch his videos.

The Only Advice You Need To Become a Developer