This article is not a detailed tutorial on how to create Web extensions for either Safari or Chrome. It is mainly an introduction to two demo projects hosted on Github on how to develop extensions that work on both Safari and Chrome (possibly Mozilla Firefox but not tested), using React/TypeScript/esbuild.

Safari extension requires a Swift project that contains iOS/macOS parent apps plus their extension apps that share a bunch of JavaScript and other resources.

The extension from my first attempt here was a crude implementation in plain, vanilla JavaScript. There was no bundling, minifying, framework or typing. There wasn't even a separate JavaScript project. All JavaScript&resources belonged to the Swift project and were managed by Xcode.

After some more research and learning, I recreated the same extension using React/TypeScript, not just for Safari but Chrome too. The new project uses esbuild to create bundled and minified code.

The extension project for Safari and Chrome

The first issue I had to address was how to create a Web extension using React/TypeScript/esbuild. Luckily there is already a template project that does exactly just that. esbuild-react-chrome-extension

The next issue is how to code in TypeScript against Web extension API for both Safari and Chrome. As it turns out Safari and Mozilla Firefox are very similar in their API but there are enough differences between them and Chrome to require different treatment especially when it comes to the use of "callbacks" and "promises" Building a cross-browser extension

Initially I created wrapper functions to convert Chrome functions that require callback to return promise instead. The better approach, as I found out later, is probably to use webextension-polyfill from Mozilla and its types.

A caveat here is, I had to set module in "tsconfig.json" to "commonjs" as shown below:

Then do import assignment in JavaScript files that call extension API:

The code generated by esbuild for the import above calls __toESM for require_browser_polyfill() which renders the polypill proxy ineffective.

The container Swift project for Safari

Another issue is how to manage the React/extension project with the container Swift project.

The boilerplate extension resources (JavaScript/css, manifest and html files) created with a new Safari extension project are managed by Xcode. But I need them to be simply copied over from the React project, instead of having Xcode creating reference for every JavaScript/html/css/image file that needs to be part of the bundle it creates.

The figure below shows how those resource files are added to the Swift bundle after a Safari extension project is created in Xcode. 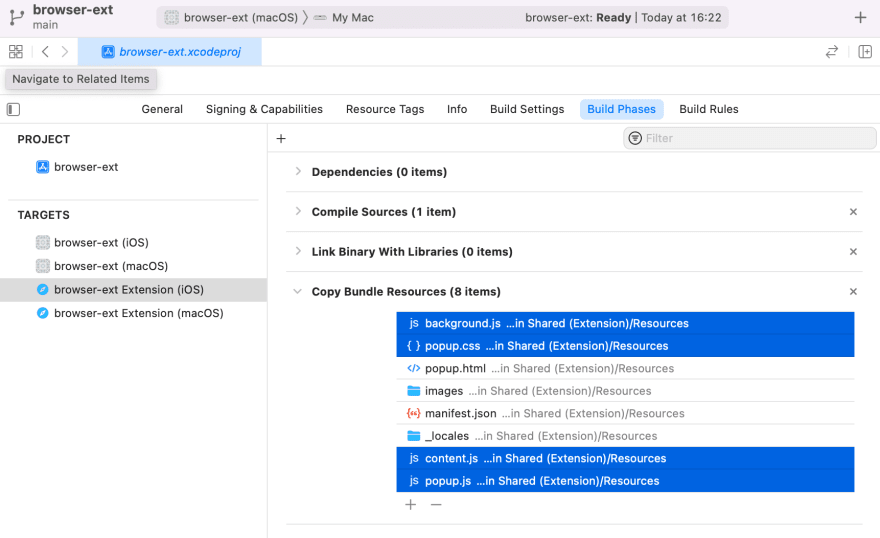 The problem is, we might have different files from the React project depending on whether it's a prod or dev build, especially if the bundler (such as Parcel) used generates randomised file names.

Instead, create an empty folder such as build under extension Resources via "finder" (not in Xcode).

Then add this new empty folder to Resources in Xcode. 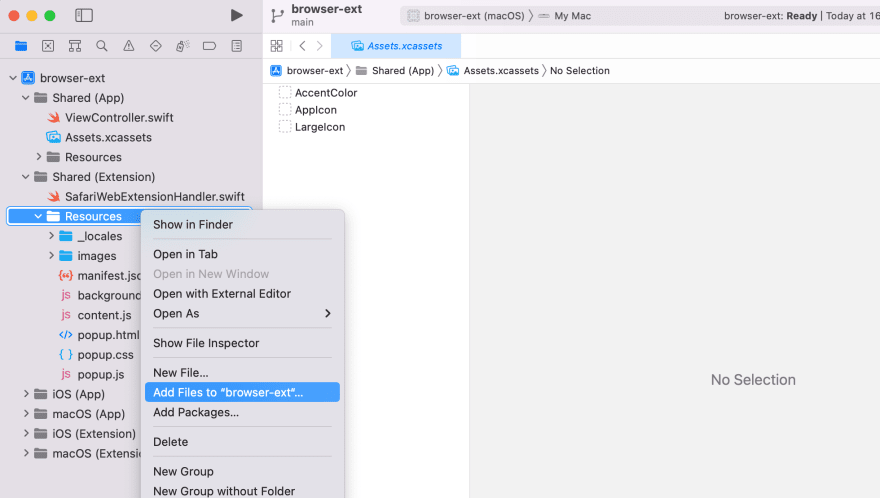 Finally, add the folder to Copy Bundle Resources build phase. This needs to be done for both iOS and macOS extension targets.

Now, all it takes to import new extension resources from the React project is to copy everything over to Resources/build folder in the Swift project.

The two sample projects are setup to work together as long as they are checked out side-by-side in the same directory.

The approach above is different from my first attempt on auto-refresh extension:

Being able to test Safari extension easily in Chrome during development has saved me a lot of time. I'd be interested to hear if you have different approaches to some issues raised here.

Once suspended, bingqiao will not be able to comment or publish posts until their suspension is removed.

Once unsuspended, bingqiao will be able to comment and publish posts again.

Once unpublished, all posts by bingqiao will become hidden and only accessible to themselves.

If bingqiao is not suspended, they can still re-publish their posts from their dashboard.

Once unpublished, this post will become invisible to the public and only accessible to Bing Qiao.

Thanks for keeping DEV Community 👩‍💻👨‍💻 safe. Here is what you can do to flag bingqiao:

Unflagging bingqiao will restore default visibility to their posts.