So you've been using TypeScript for a while now and finally, you're wondering how it does what it does. The relationship between TypeScript and JavaScript is a pretty interesting one and one from which we can learn some interesting things about how programming languages work under the hood.

Recently, I've taken an interest in looking under the hood (essentially doing a code review of the tools I use). I've learned a lot through this. More than just about the specific technology I'll be looking at.

In this article, we'll do a high-level tour of how Typescript works under the hood and hopefully set the stage for more Typescript related articles in the future.

You might know all this. If you do it's great! Correct me where I go wrong and explain better where I'm unclear. If not, then it will be very useful. Hopefully, all of us will find something we didn't know.

TypeScript is an open-source language that builds on JavaScript by adding static type definitions and static type checking. These types provide a way to describe the shape of an object, providing better documentation, and allowing TypeScript to validate that your code works correctly. Writing types can be optional in TypeScript because it has powerful type inference which allows you to get a lot of power without writing additional code.

Being strongly typed on top of a weakly typed platform enables TypeScript to do some language syntax and implementation that would be difficult, if not impossible, to do in traditional strongly typed languages.

The reason for TypeScript's existence can be summarised with these three ideas.

TypeScript allows for your code to fail as you're writing it. That way you have immediate feedback about what will not work and you don't have to discover it down the line. This gives you confidence when you ship that you're shipping the correct thing. We want to see things fail at this stage because of the following factors:

How TypeScript works under the hood

When you run a program, what youre really doing is telling the runtime to evaluate the byte-code generated by the compiler from the AST parsed from your source code. The details vary, but for most languages, this is an accurate high-level view. Where TypeScript is special is that instead of compiling straight to byte code, it compiles to JavaScript code! You then run that JavaScript code like you normally wouldin your browser, or with NodeJS, etc.

So when does it make code type-safe? After the TypeScript compiler generates an AST for your programbut before it emits the codeit type checks your code. 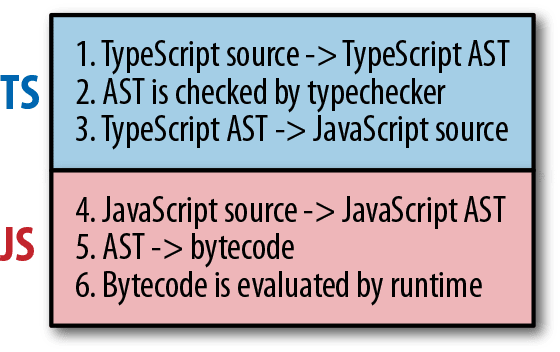 In this process, steps 12 use your programs types; step 3 does not. TypeScripts type system is fully erased.

Thats worth reiterating: when the typescript compiler compiles your code from TypeScript to JavaScript, it wont look at your types. That means your programs types will never affect your programs generated output and are only used for type checking. This feature makes it foolproof to experiment with, update, and improve your programs types, without risking breaking your application.

One of TypeScripts core principles is that type checking focuses on the shape that values have. This is sometimes called duck typing or structural typing. Before we explore the characteristics of structural typing, let's talk a bit about C# and Java for comparison.

In C# any Javawhich use reified, nominal type systemsany value or object has one exact type - either null, a primitive, or a known class type. The definition of this type will reside in a class somewhere with some name, and we cant use two classes with similar shapes in place of each other unless theres an explicit inheritance relationship or commonly implemented interface. The types we wrote in the code are present at runtime, and the types are related via their declarations, not their structures.

In TypeScriptwhich uses structural typingits better to think of a type as a set of values that share something in common. Because types are just sets, a particular value can belong to many sets at the same time. TypeScript provides several mechanisms to work with types in a set-like way, for example, unions and intersections, and youll find them more intuitive if you think of types as sets.

In TypeScript, objects are not of a single exact type. For example, if we construct an object that satisfies an interface, we can use that object where that interface is expected, even though there was no declarative relationship between the two.

The obj variable is never declared to be a Pointlike or Named type. However, TypeScript compares the shape in the type-check. They have the same shape, so the code passes. TypeScripts type system is also not reified, that is theres nothing at runtime that will tell us that obj is Pointlike. In fact, the Pointlike type is not present in any form at runtime.

There is also no difference between how classes and objects conform to shapes:

If the object or class has all the required properties, TypeScript will say they match, regardless of the implementation details.

OOP programmers are often surprised by two particular aspects of structural typing. The first is that the empty type seems to defy expectation:

TypeScript determines if the call to fn here is valid by seeing if the provided argument is a valid Empty. We can see that { k: 10 } has all the properties that Empty does because Empty has no properties. Therefore, this is a valid call!

The second frequent source of surprise comes with identical types:

Again, this isnt an error because the structures of these classes are the same.

Should you invest the time to understand TypeScript deeply? Won't it lose favour like flow, CoffeeScript, etc?

The underlying tension to all this is the divergence between TypeScript and JavaScript. Typescript pitches itself today as JavaScript with types, i.e., if JavaScript evolves, then TypeScript evolves in the same way. And that's the biggest argument for why it's likely going to stay for long.

The TypeScript team contributes to the TC39 committees, which help guide the evolution of the JavaScript language. For example, the TypeScript team championed proposals like Optional Chaining, Nullish coalescing Operator and Throw Expressions. And more recently have submitted a proposal to officially add types to JavaScript.

Adopting TypeScript is not a binary choice. There's a sliding scale of TypeScript support that you can get in any project. You can start by annotating existing JavaScript with JSDoc, then switch a few files to be checked by TypeScript and over time prepare your codebase to convert completely.

Finally, TypeScripts type inference means that you dont have to annotate your code until you want more safety.

Not convinced? Check out TJ VanTollon's take on this talk:

Speaking of gradually adopting TypeScript. Want to know how you can do that? Keep an eye out for my next blog post for a walkthrough.

How to create your First Pull Request on GitHub in less than 60 seconds ⏰!

Need to extract text between two words that last occurred

How to create a container components

Once suspended, bhekanik will not be able to comment or publish posts until their suspension is removed.

Once unsuspended, bhekanik will be able to comment and publish posts again.

Once unpublished, all posts by bhekanik will become hidden and only accessible to themselves.

If bhekanik is not suspended, they can still re-publish their posts from their dashboard.

Once unpublished, this post will become invisible to the public and only accessible to Bhekani Khumalo.

Thanks for keeping DEV Community safe. Here is what you can do to flag bhekanik:

Unflagging bhekanik will restore default visibility to their posts.