There are many ways to set up Python on Windows—too many ways. According to the Zen of Python:

There should be one—and preferably only one—obvious way to do it.

In this spirit, I describe here what I think is the simplest way to set up Python on Windows, where "simplest" means:

Assuming you have never installed Python, the basic steps are:

I conclude with some tips on using VS Code and a discussion of alternative methods of setting up Python on Windows.

If you type python or python3 at a command prompt in a new Windows 10 installation, you land at a link at the Microsoft Store for installing Python. This is supposed to make things easy for beginners. It sort of does, but at the expense of potentially making it harder to manage multiple Python versions. Installation via the Microsoft Store smells like magic to me, so I don't recommend it. 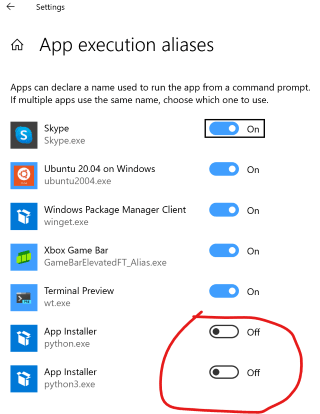 To avoid magic, download Python directly. You can install as many versions as you like. The order of installation doesn't really matter, though (as discussed below) it may affect the behavior of py.exe, the Python launcher.

By default, when you install Python with an installer from python.org:

Accept these defaults. The installation screen should look like this: 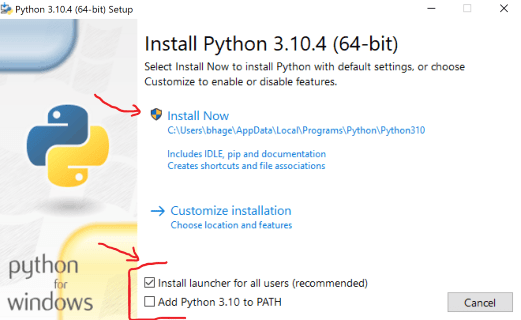 After you select Install now, the next screen will ask if you want to Disable path length limit so that your path can exceed the system's 260-character limit. I suspect this is unnecessary, since we are deliberately not adding Python to the path. But I'm not sure there's a downside. Use your judgment.

The Python launcher py.exe allows you to easily work with multiple different versions of Python. Basic commands (executed at a command prompt):

If your virtual environment is at C:\my_projects\project1\p1_venv, activate it as follows:

You should now see the virtual environment name before the prompt, like so (assuming your working directory is also shown at the prompt):

To deactivate, just enter deactivate at the prompt.

Creating Powershell aliases can make using virtual environments easier. Building on the example above, you might put something like this in your Powershell profile (a user- and host-specific profile is at $profile.CurrentUserCurrentHost and is called Microsoft.PowerShell_profile.ps1 wherever it's found1):

The VS Code Python extension is designed to work well with virtual environments, but I found the documentation confusing. While answering my own question on StackOverflow, I figured out what I think is a good workflow. This assumes you have already created your virtual environment in a subfolder within your project directory:

You might be tempted to use a virtual environment as a project directory, that is, as the root of your workspace. Don't do it. The VS Code documentation should say2):

Note: Your Python virtual environment should always be a subdirectory within a VS Code workspace. Opening the virtual-environment folder directly, as the root of the workspace, might cause problems.

You can create a Python virtual environment within a workspace by using VS Code's built-in terminal. But I prefer to create the environment first, outside of VS Code, because that way, I know exactly what's happening.

If for some reason VS Code does not detect your virtual environment, you can manually direct VS Code to it by opening the command palette with Ctrl-Shift-P, entering Python: Select Interpreter, and navigating to python.exe found in the \Scripts subfolder of the virtual environment. You should only need to do this once.

Alternative methods for setting up Python on Windows

There is a whole project, pyenv for Windows, specifically designed to allow you to manage multiple versions of Python on Windows. It's an impressive piece of work, and if it interests you, check out a very detailed Real Python tutorial on using it.

I prefer not to use it for two reasons:

Using venv or virtualenv (or something else)

Since Python 3.3, venv has been the tool in the Python standard libary for creating virtual environments. For simplicity's sake, like the author of the second answer to this StackOverflow question, I (and apparently Guido van Rossum) prefer using it.

You will, however, see lots of references to using virtualenv for creating virtual environments. It existed before venv and is apparently your only option if you use Python 2.x. And pyenv includes even more related tools. These various tools are summarized in the first answer to the StackOverflow question cited above. I disagree with the answer, but it's full of useful information.

1For more on Powershell profiles, see footnote 1 in my post about setting up a Windows dev environment. ↩

2Instead of this very clear warning, the VS Code documentation says:

Note: While it's possible to open a virtual environment folder as a workspace, doing so is not recommended and might cause issues with using the Python extension. ↩

bhagerty
Gadfly. Lawyer. Writer. Computer geek. Music lover. Vegan. Never satisfied with the status quo.
How do you deal with Mouse Arm Syndrome !
#discuss #help #community #programming
June 23rd, 2022: What did you learn this week?
#weeklyretro #weeklylearn #discuss
Between python and javascript which one should I focus on?
#webdev #javascript #python #programming

Once suspended, bhagerty will not be able to comment or publish posts until their suspension is removed.

Once unsuspended, bhagerty will be able to comment and publish posts again.

Once unpublished, all posts by bhagerty will become hidden and only accessible to themselves.

If bhagerty is not suspended, they can still re-publish their posts from their dashboard.