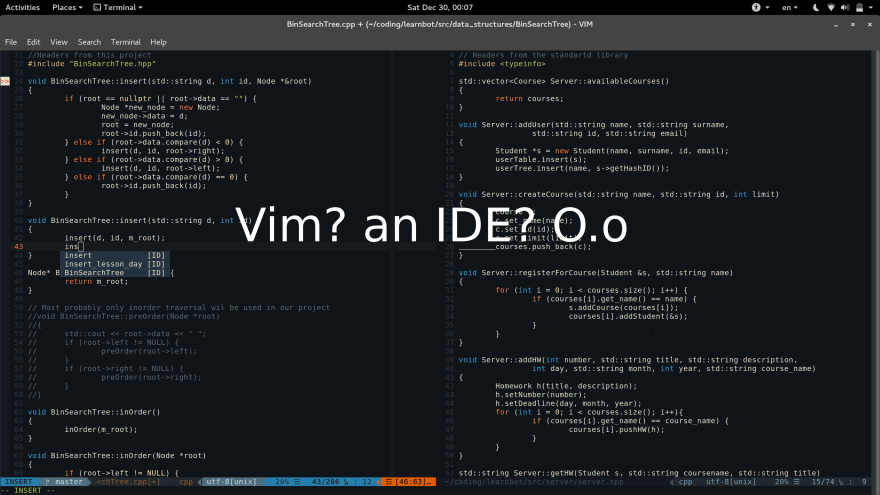 Every developer has a favorite text editor or an IDE, and as long as developers exist, Text Editor wars are not going anywhere. The two main forces of the so called "Editor War" are Vim and Emacs. They are both great and can do a lot, but... but they are not an IDE.

I've heard many developers, who are in love with vim or Emacs, but use IDEs like clion, CodeBlocks, VisualStudio, etc., because of certain features.

But wait! What if I tell you that you can turn your vim or Emacs into an IDE? Yes, it will work, and in majority of cases it will work better and faster than your traditional IDE, at least for C/C++ it does.

Configuring vim to become an IDE

Well, the main basic features of an IDE are

Of course there are many more features that IDEs have, and it is possible to configure vim to do most of them, but in this post I will only speak about these main three.

Note: The configuration is for C/C++, but with light modifications and right plugins it is possible to make them work for your desired language.

You can achieve such feature with a vim plugin called YouCompleteMe.

All you have to do is install the plugin and configure for your desired language and libraries.

One of the things I like in Vim is when you use make command from it, in case of errors it brings the cursor on the line, where the first compile error occurred. However, the IDEs do a lot more than that. They detect the errors, right after you type
them.

For vim, the same functionality provides the YouCompleteMe plugin, which we've already discussed above. After typing, when you press the Esc key, in case of compile errors, it will highlight the code parts causing the errors.

When I was just starting to use Vim, for debugging my programs I had to open another terminal, run gdb, type ref and try to use not so user friendly interface, without syntax highlighting. When writing command I couldn't even use my arrow keys. Well, that sucked.

Then I discovered the Conque-GDB

Conque-GDB is a vim script that integrated GDB into your vim. Cool right? What's more cool, is that it shows the breakpoints or segmentation fault location right on your code in vim. You can even use your arrow keys moving your cursor!

I will be honest, I hated GDB even after using this plugin, until, one day, during a Programming Olympiad I had to use Visual Studio's debugger. Well I couldn't even find where my program threw a SegFault. So what I did (I don't even know if I had the right to do so) was to boot Linux from my USB and use Conque-GDB. 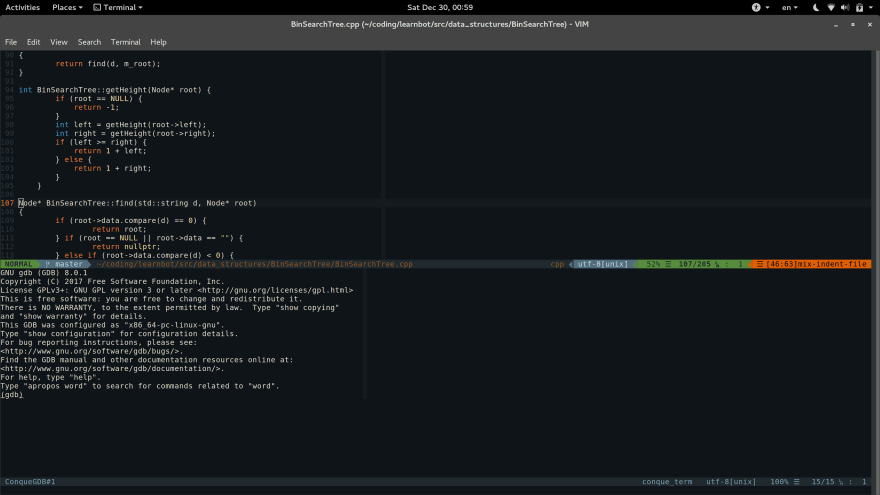 There is a very awesome website full of various vim plugins, called vimawesome.com. You can find many many more plugins there and make your vim much closer to an actual IDE.

You can comment about your vim configuration below. By the way this is my first blog post, so I am waiting for your positive criticism in the comment section.

How to Learn C/C++ for Microcontroller Programming?

Once suspended, bezirganyan will not be able to comment or publish posts until their suspension is removed.

Once unsuspended, bezirganyan will be able to comment and publish posts again.

Once unpublished, all posts by bezirganyan will become hidden and only accessible to themselves.

If bezirganyan is not suspended, they can still re-publish their posts from their dashboard.

Once unpublished, this post will become invisible to the public and only accessible to Grigor Bezirganyan.

Thanks for keeping DEV Community safe. Here is what you can do to flag bezirganyan:

Unflagging bezirganyan will restore default visibility to their posts.