Visit my blog for the original post: PCF - CSS for Model-driven Apps (MdA)

I will not write another article about how to create your first PCF Control. There are some good article out there already covering this topic . For example: the Microsoft Docs, from Todd Baginski or the series of Articles regarding PCF from Allan De Castro (Episode 1 & Episode 4).

This article will focus on what i learned regarding CSS while creating my first PCF Controls (learn more about them).

What is a PCF Control?

Like written above it gives the possibility to extend the functionality of an Model-driven or canvas app. With PCF we can bundle those functions in own Controls. Because of this it is possible to deployed and used them in every environment, without knowledge of meta data such as field name. There is no longer the need to recreate functionalities we need in every project via JavaScript.

Because of the structure of the CSS of Model-driven Apps the Control will not automatically inherit the correct style. That means, that you have to style your Component manually. I will explain it on the example of a Control for a "Text.Singeline"-Field.

First of all we have to define the correct HTML structure. In the case of our example this will be rather easy.

The HTML Structure will be created in the "init"-function of your control.

I usually start by creating an own "container"-Div. There is already a "container"-Div passed to our init function. But i like to add my own, since i then can decide the CSS-classes and my CSS will not be affected if Microsoft changes something in the structure of this standard "container"-Div.

Then i create the needed input and add the needed elements (like type, css-classes or event listner)

The last step is to combine those two and add them to the DOM of your Control.

Different approaches to get the same Style

There are two ways of getting the same style as the standard.

Both have there pros and cons. I usually choose the second option. When we look at the CSS-class list of an element you will see that there are a lot of them:

On the image i don't even show all classes of a standard Text.SingeLine field.

If we then look at the actual CSS behind those classes, we do see that every class has only one row if CSS. 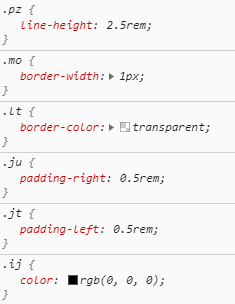 For me that is very confusing. That is one reason why i copy the CSS. The other reason is that i like to be independent of changes Microsoft does. The reason for that is, that i might not be able to update my PCF Controls in time. With copying the CSS they still work after a change of Microsoft.

So if you decide on going for the second option as well i have already resembled the CSS that Microsoft uses for Inputs in Model-driven Apps, as of today.

If you copy the code below and change the first class to the namespace of your control it will look like a standard input.

In the posts that will follow i will, among other things, talk about the following topics regarding PCF Controls:

Thank you for reading!!
Make sure to step by my blog for more interesting posts. benediktbergmann.eu

Once suspended, bergmannbene will not be able to comment or publish posts until their suspension is removed.

Once unsuspended, bergmannbene will be able to comment and publish posts again.

Once unpublished, all posts by bergmannbene will become hidden and only accessible to themselves.

If bergmannbene is not suspended, they can still re-publish their posts from their dashboard.

Once unpublished, this post will become invisible to the public and only accessible to Benedikt Bergmann.

Thanks for keeping DEV Community safe. Here is what you can do to flag bergmannbene:

Unflagging bergmannbene will restore default visibility to their posts.