I think you know what ping is: it is a command that you can run on your terminal to see if a host is up and running.

It works by sending some packets to the host and waiting for a response, and it measures the round-trip time that the message takes to go to the host and come back to the client.

Here's Abe Simpson with a round trip example:

An example can be

PSSS! Remember not to use HTTPS!!

More in details, it sends an ICMP echo request to a specified interface and waits for a reply.

Just as reminder, ICMP (Internet Control Message Protocol) is a network protocol that is at the same level of TCP and UDP on the networking stack, but it is typically not used for exchanging data between endpoint but only for sharing errors or information.

The problem comes when you want to ping a service hosted on Azure: in order to avoid DDoS attacks, the Azure team decided to block ICMP packets.

As stated by the Azure Networking Team: Unfortunately ICMP presents risks and problems for our underlying network infrastructure.

So you cannot ping them.

In fact, if you try it from your system, you will receive Request time out.

But at least you can try to reach it using a browser!

A typical use case

Of course, you can't open a browser inside the Azure portal. So what?

TCPPing - the solution for you

If you try to ping myapi from Azure, you won't receive a Request time out, but a different error:

That's because the ping command has directly been disabled.

So how can we solve it?

Well, the solution is pretty easy! There is a command called tcpping that allows you to do something similar, and that can be called by both the Console and the Kudu advanced tool, accessible in the Development Tools section. 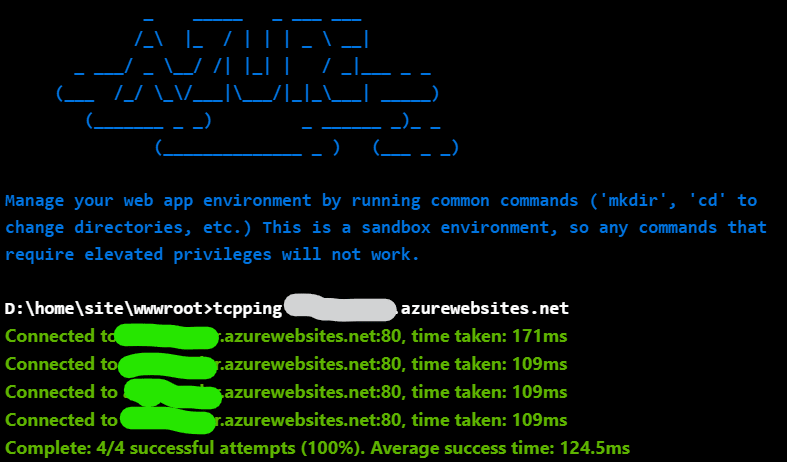 If you wanna have more info about this command, you can simply type tcpping.

First of all, it explains what it is: Opens a TCP socket to a target host:port and returns whether the initial handshake was successful and a connection was established.

That's the way to avoid ICMP packets! Just use TCP!

There are also some flags that can be set:

Infrastructure from code - not 'as', but 'from'

Davide Bellone
Fullstack in my past, backend in my future. C# and .NET in my 💘
From idea to publishing, and beyond: how I automated my blogging workflow with GitHub, PowerShell, and Azure
#azure #github #blogging #writing
How to migrate Azure Functions v2 to v3
#netcore #azure #azurefunction #serverless
How to add a Startup class to Azure Functions
#dotnet #azurefunction #azure #serverless