Enums are really useful if you want to, well, enumerate the possible values for a field. An example of enumeration is the list of movie genres:

This way, you can define that a field accepts only values coming from that specific enum, thus narrowing down the list of possible values:

So, now, you can instantiate a new movie as

As usual, there is more than this, even if we are used to staying on the surface.

#1: Enums are nothing but masked numbers

Even though their structure may let you think of a complex structure, enums are value types.
This means that if you pass an enum to a function, you will not modify it as if it were an object.

In fact, if we define a function that sets a given MovieGenre to Musical:

and we try to update a value, we will notice that we haven't actually updated the value.

Internally, an enum is a numeric type: it can be made of byte, sbyte, short, ushort, int, uint, long, or ulong values.
By default, an enum is a static, Int32 value, whose first element has value 0 and all the following elements have their value increased by 1 compared to the previous one. 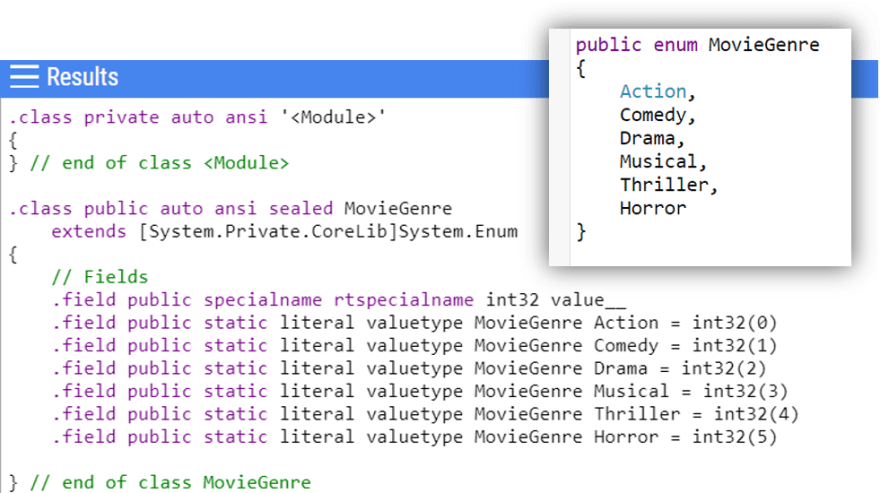 We can customize this default behavior by using a different starting value and then have all the other values will follow the numeric order. 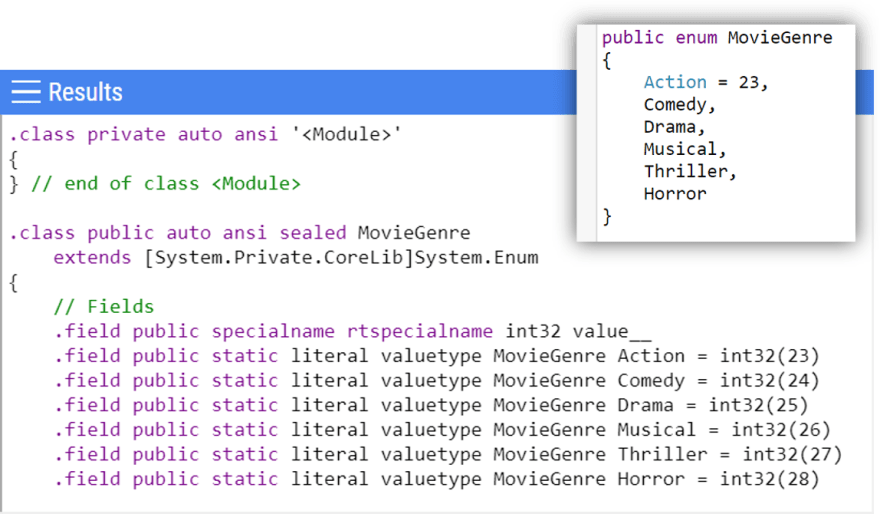 This means that if you reorder the elements (for example, because you want the values to be in alphabetic order, so moving Horror between Drama and Musical), you might mess up all the following values and bring subtle bugs in.

How to fix it? Simple: specify a value for each element!

This way you can reorder the items without the risk of creating bugs.

#2: Many ways to get the value

Even if internally an enum is nothing but a number, you can get its friendly name. There are many ways to do that.

If you want the string value of a statically defined enum value, you can rely on the nameof operator, with

or, using the Enums class, try with the GetName method:

The GetName method is a bit cumbersome to write, so probably you'd prefer using the nameof operator, which was released with C# 6.

How can you get the value if it is set at runtime?

Of course, you may use the ToString method.

Or, if you want to rely on the Enum class, you can try with

Have you noticed the last parameter of the previous snippet? What does it mean?

Well, as you can format Guids, you can use flags to format an enum as well.

These flags can be used both on the Enum.Format and the ToString method.

You can read more details on those values on Microsoft documentation.

If you need the numeric value of the enum, you can simply cast it.

You can transform an enum to a string, and of course you can do the opposite!

or, if you prefer defining the variable inline,

neat and clean, isn't it?

A thing that you must keep in mind is that, if the string you pass to the method does not exist, TryParse will set to 0 the out variable: this can cause bugs if you have defined a value associated with 0.

In the above example, "Feiled" is not a valid value, so the assigned value is 0 which is casted to OK.

You can prevent this bug in 2 ways: by checking on the returned value of TryParse, which returns true if the parsing was successful, false otherwise; or you can add an additional check before the parsing, using the IsDefined method, with something like Enum.IsDefined(typeof(Status), "Feiled").

What if an enum fields must allow multiple values? After all, a movie can have more than one genre, right?

You could implement it as a list (or an array) of flags, or... you can use the Flags attribute.
This flag allows to easily apply OR operations on enums, making the code cleaner and more readable. The downside is that now enums values can't have custom values, but must be a power of 2, so 1, 2, 4, 8 and so on.

So now we can create an action-comedy movie

Now that you have flags on enums, whatcha gonna do?
You can use the HasFlag method to, well, check if a value has a certain flag

This is more performant than looping though a list of enums, since now we're working directly on bits.

As always, there are some best practices to follow. The following ones are suggested directly on the Microsoft documentation:

Let me explain the third point: do you remember the Status enum?

Here's a method that tells if the input is valid:

and well, you can imagine how it works.

What happens if you do this?

Exactly, the value is Invalid input. So, remember to validate inputs!

In this article, we've seen that

Sentiment Analysis for Tweets in a Chat Bot - Part 2 Integrations

Davide Bellone
Fullstack in my past, backend in my future. C# and .NET in my 💘
How to improve Serilog logging in .NET 6 by using Scopes
#csharp #dotnet #logging #serilog
C# tip: define Using Aliases to avoid ambiguity
#csharp #dotnet
C# Tip: use IHttpClientFactory to generate HttpClient instances
#csharp #dotnet