I've experienced Docker image build installed a different version of the Werkzeug dependency package than the development editable install process. And this caused the Python project in the Docker image failed to run. Development editable install means running the “pip3 install -e .” command within an active virtual environment. I'm describing the problem and how to address it in this post.

Please note, the Python code in this post is a continuation of the code used in the post Python: interactive shell and shell_context_processor() decorator., whom code can be cloned with:

On around the 20/July/2022, I did a Docker build for this Python project using editable install image build step: RUN pip3 install -e .. I was able to run this image successfully. In fact, I did use it to learn Docker volumes: I started and stopped the runs several times. I'm 100% certain that it worked. I removed all containers, images and volumes afterward.

I've manually recorded all essential commands and their results in a text file -- I still am doing that. On the 24/July/2022, I repeated what I've done previously: the build worked, but running the image resulted in import error!

Please see the screen capture below for the full log: 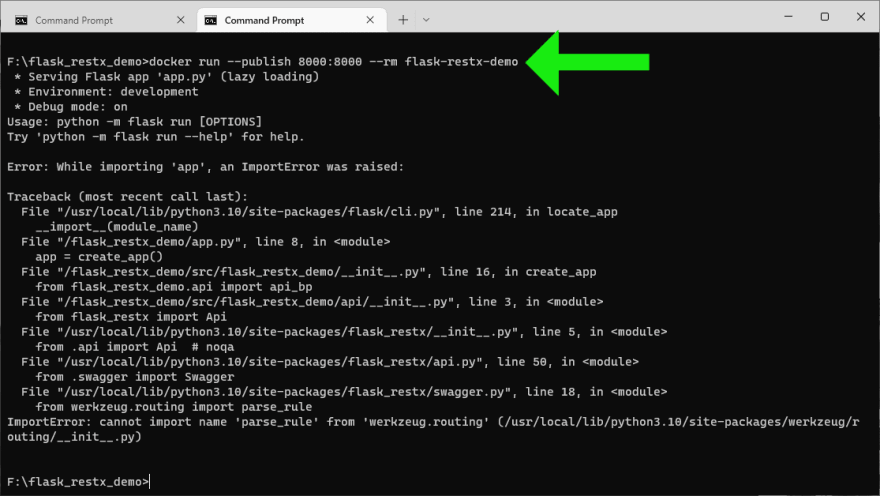 Following the error, I was able to figure out what the problem was. Inside the Docker image, the version of the Werkzeug was 2.2.0, while in the development environment, it is 2.1.2. I describe how I did this in the later section How to look inside a Docker image.

The Werkzeug package, in my understanding, is a dependency package. It gets installed automatically when required by the packages that we specify. We don't usually have to explicitly specify the Werkzeug package as a required package.

Between those nearly four ( 4 ) days, the only significant change was in Python codes, where I enable cross-origin AJAX with package Flask-Cors. In my understanding, this package should not cause a different version of the Werkzeug package to be installed?

-- But this configuration has not been changed between those nearly four ( 4 ) days.

Google searches would show that others had problems with Werkzeug dependency versions too, and they have to explicitly force the correct version in their required packages list. So I thought if I force the development environment to explicitly install version 2.2.0, then it will fail with the import error like the Docker image does.

I updated setup.py's install_requires section to include as its last entry 'werkzeug==2.2.0':

Then run the project:

I did get the expected error. Please see the screen capture below: 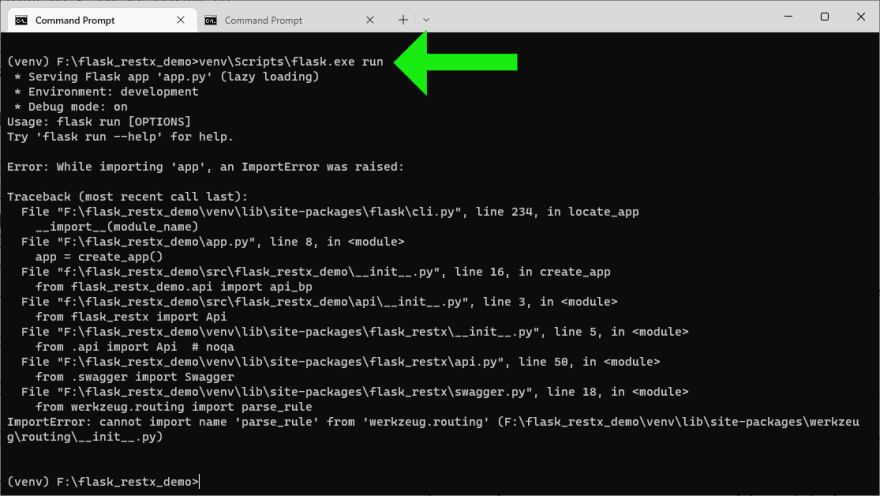 Based on this, I expected that if I change Werkzeug to version 2.1.2 then the Docker image should work. The development environment already works as we've seen before.

❶ Re-install required packages in editable mode, the project run with the Flask development server as before. ❷ Re-build and re-run Docker image -- it works.

Please note, if run with:

Then the URLs to container are:

The latest code for this post can be cloned with:

Please note, I have now included two ( 2 ) test clients under test_client_app\. ⓵ test_client_app\delphi is a simple Delphi 10.4 Community project, you will have to compile it yourself. ⓶ test_client_app\jquery-ajax\TreeAPIClient.html is a JQuery page, just copy it to a web site or a virtual web directory, and run it from there.

How to look inside a Docker image

Run the container in the interactive mode with the bash process:

We would need an editor to look at the files. vi is not installed. We can install it, but we need to know what kind of Linux distro it is, run:

I searched for “install vi debian”, and found this How to Install vim editor on Debian 11 -- basically, run these two ( 2 ) commands:

Now that we have vim, we can look at files now. With Werkzeug 2.2.0 installed:

There is no parse_rule defined!

The last line should tell us the version:

Although I still couldn't figure out why the different versions of Werkzeug get installed... I'm happy to have figured out that the versions caused the import error. I hope you find this post useful, thank you for reading and happy Dockering 🙀!

CDK for Terraform (CDKTF) on AWS: How to Configure an S3 Remote Backend and Deploy a Lambda Function URL using Python

Be Hai Nguyen
I have been a software develper for around 20 years. I am looking forward to work with Python. My other blogs: https://behainguyen.wordpress.com/ https://behai-nguyen.github.io/
Python: the !r string format and the __repr__() and __str__() methods.
#python #format #repr #str
Python: Flask, dictionaries as JSON objects ready to be used by JavaScript.
#python #flask #dictionary #json
Python: SQLAlchemy extracting column names and data from a MySQL stored procedure returned dataset.
#python #sqlalchemy #storedproc #column

Once suspended, behainguyen will not be able to comment or publish posts until their suspension is removed.

Once unsuspended, behainguyen will be able to comment and publish posts again.

Once unpublished, all posts by behainguyen will become hidden and only accessible to themselves.

If behainguyen is not suspended, they can still re-publish their posts from their dashboard.

Once unpublished, this post will become invisible to the public and only accessible to Be Hai Nguyen.

Thanks for keeping DEV Community 👩‍💻👨‍💻 safe. Here is what you can do to flag behainguyen:

Unflagging behainguyen will restore default visibility to their posts.