As of 2020, Windows is still the dominant desktop OS comprising nearly 90% of it's demographic and I was in it for over 14 years. It was initially fast but as time progressed, the Windows updates stacked up along with previously installed softwares. Adding gasoline to the fire, Windows decided to bake advertisements and even more telementary services right into the operating system.

Then one day, I wanted to print a theatre ticket in a rush and turned on my computer only to see...

Now I finally chose to migrate to Linux and after careful experimentations with various distros and DEs, I came across Pop!_OS by System76 and loved it straight out of the box.

So why do I have so much love for a Ubuntu based distribution? Well, let me explain.

1. Linux is free and that's a great price!

This is true not only for the operating system and the kernel but also for all the software that comes bundled with it. Also in most cases, there will be an open-source alternative for any paid application in Windows like the LibreOffice Suite instead of Microsoft Office.

2. Pop!_OS is beautiful and functional.

Now to the fun part. Pop!_OS is undoubtedly one of the best-looking desktop environments I have ever used. I would suppose it is tied with Elementary OS, Deepin and Budgie DE. While it's Gnome desktop environment, has its fair share of criticisms, it does hold true to its values of getting out of your way to get work done. 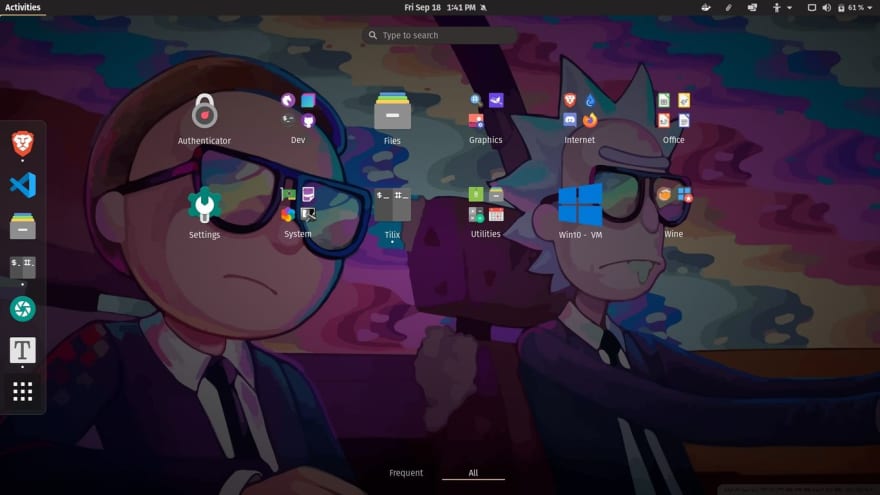 GNOME has no active task management, no desktop icons, no application menu, no dock or taskbar. Activities are an easy concept but coming from Windows, I took a while to get used to switching windows through the activities or the keyboard.

However, if the default design and working are not up to your fondness, then you can customize and tweak it however you want using the GNOME Tweak Tool. You can even make it to look and behave like macOS or Windows complete with a start menu.

As far as functionality goes, if you are used to GNOME then you will feel at home in Pop!_OS. You boot straight to your desktop, and the system tray is pretty minimal by default helping you focus on whatever you're onto. 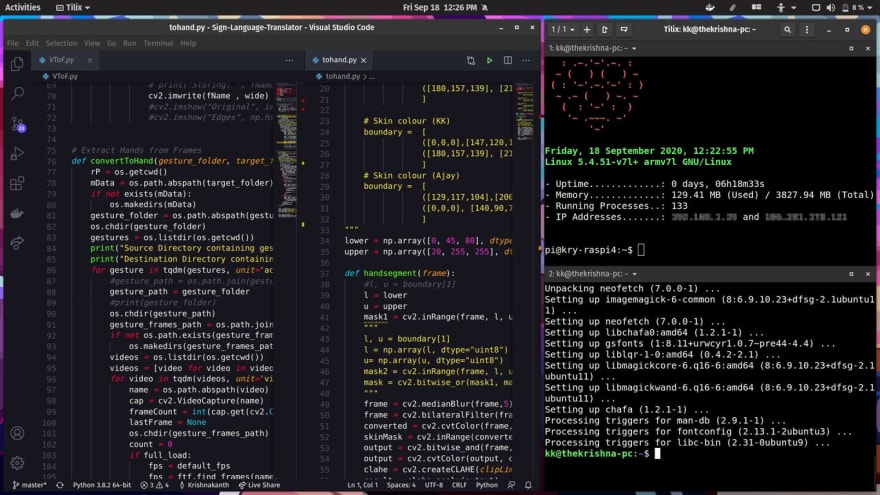 As of Pop!_OS 20.04, it has released an automatic window tiling manager. This enables you to tile and arranges all open windows at the click of a button which is remarkably helpful when multitasking.

Pop!_OS can do everything Ubuntu can do. But its dedicated tools, attractive looks, and refined work flow provide a smooth Development. It supports tons of programming languages and useful programming tools natively. Nvidia drivers with CUDA support comes preinstalled which enables developers to speed up compute-intensive applications.

There are features like the New Keyboard shortcuts, Increased Compatibility, New App launcher and even more that you shoud take a look at. Overall, The Pop!_OS is smooth, functional, and melts right into the background just as it was intended to. 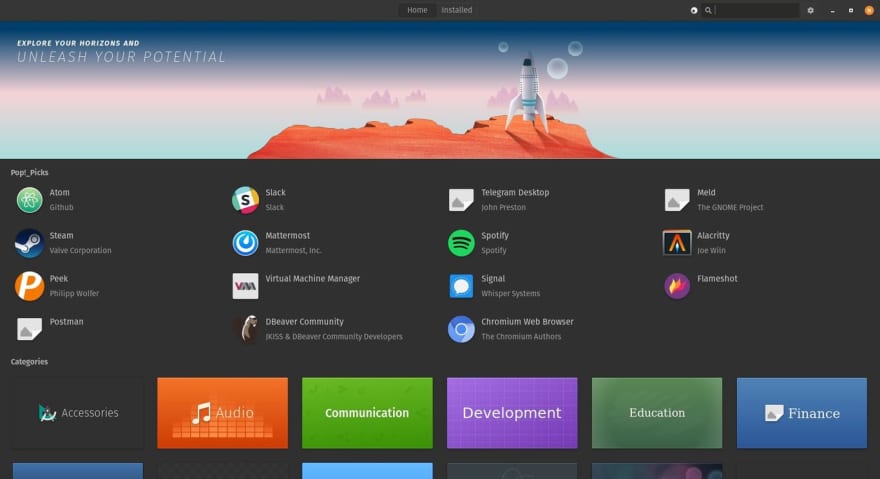 Pop!_Shop is a software store for Pop!_OS as to Play Store is for Android. Here, you can search and install any package with just a click of a button. To add more power to the store, Pop 20.04 brings Flatpak support to Pop Shop. This implies that if you want to download any application, you can now also pull packages from the Flathub repository along with Pop!_OS and Ubuntu repo.

Flatpak/Flathub is a widely recognised universal package management tool and store that contains a number of applications. You can learn more about Flatpaks in my previous post. Hence, you now have access to more packaged applications with high privacy.

Nearly all major Linux distributions have come a long way in the past 2 years in making the proprietary Nvidia driver available to their users. Here again, there’s a subtle yet a functional difference in the way Pop!_OS handles Nvidia drivers compared to its alternatives that hybrid graphics laptop users like me would especially appreciate.

When you download the Nvidia version of the Pop!_OS ISO, the Nvidia graphics driver is active during the OS installation process, not merely “available” to install. That means no risk of perplexing black screens which is more common with the open-source “Nouveau” driver for Nvidia hardware. 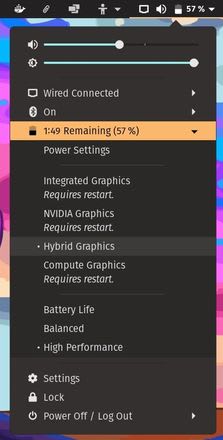 Pop!_OS supports hybrid graphics straight out of the box. It includes the system76-power package, which includes the ability to switch between integrated, NVIDIA, and hybrid graphics modes.
This means once you launch your application in Hybrid Graphics mode with a dedicated Graphics card, your laptop runs on the battery-saving Intel GPU and only uses the NVIDIA GPU for applications running.

While no operating system is absolutely risk-free, Windows is a big target for viruses and malware due to its majority market share. With Linux as a whole, you only need to be smart, stick to trusted software repositories, and avoid using risky programs such as Adobe Flash or free_ram.sh. Linux is more secure than Windows primarily because of the way it's designed and handles user permissions. This is one reason why most of the web runs on Linux. Since most packages you install would be open-source, their codebase is public and would have been reviewed by more developers for bugs and security vulnerabilities.

Speaking of security, Pop!_OS is so far the only Linux distribution that enables pre-installed full-disk encryption out of the box. Moreover, you can use the ‘Refresh install’ feature to reset your operating system while preserving the files in your Home folder.
Windows chooses when to install updates, and it displays a message declaring that your computer is going to be rebooted. While with most linux distros, you get to decide when those updates are installed, and in most cases, the updates are installed without rebooting the system.

Compared to Windows or macOS, Linux support is easier to find, and there are dozens of forums, subreddits, chat rooms, and even more websites committed to helping people receive and understand Linux. Unlike Microsoft support, which is mostly from an employee, Linux support usually comes from enthusiasts and developers.

Every single part of your Distribution can be adjusted if you have the time, will and support. KDE Fan? Remove GNOME from Pop!_OS and install KDE Instead. System services slowing your boot? Disable and mask them. In fact, you can even write your own scripts and packages if you have the time and effort. 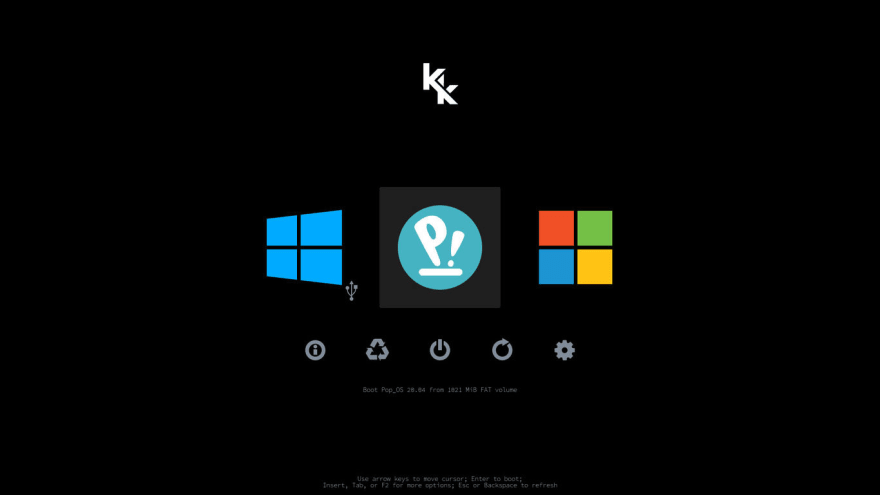 If you're Dual Booting Windows and Pop!_OS, I highly recommend you to use rEFInd Boot Manager instead/on-top of the systemd-bootloader. I had to manually adjust both GRUB and systemd-boot configurations every time Windows had a major update, while rEFInd scans for kernels on every boot and is more adaptive and is less reliant on configuration files. Plus rEFInd has more eye candy.

2. Bridging gaps between OSes in a system

2.1 Why didn't I delete Windows for good?

Despite Linux growing better every day, there are still a lot of programs, softwares and hardware that are exclusively made for Windows due to majority market share and the open-source alternatives are not essentially good enough. Adobe Photoshop, Microsoft Office and Epic Games Stores are a great example of it.

If you're dual-booting Windows and any other Linux Distibution(s), I strongly advice to turn off Fast Startup in Windows as they make all accessible filesystem read-only in Linux until you fully shut down you Windows. Create an extra NTFS partition for all your OSes to coexist and share common files peacefully. 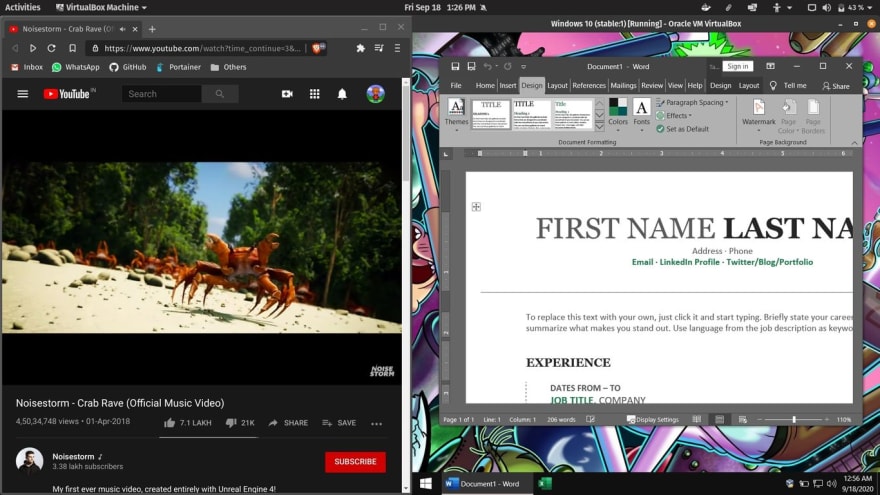 Not every Windows Program has it's equal Open-Source Linux Alternative so if you're lucky (or savvy) enough, your program might run using Wine on Linux. You can check your application's compatibility on Wine here. Platforms like Lutris can even install and launch games so you can start playing without the hassle of setting up your games with Wine Linux powered machine. If you can't find your program on the database, give it a shot.

Popular programs like Microsoft Office still doesn't have great compatibility with Wine. So if Wine doesn't work for your program, create a small Windows Virtual Machine and run on it. I created mine using VirtualBox and Windows 10 Development Virtual Machines provided by Microsoft. However, power-demanding programs like Adobe Photoshop still don't well on Virtual Machines and here's is where you have no other option than to boot into your Windows Host.

Writing Bash Scripts that are not only Bash: Checking for Bashisms and testing with Dash