This was originally written on my blog, but I figured it can help save others hours of troubleshooting so I'll share it here as well!

Disclaimer: This was written and test on a Debian based Linux system. Commands may vary for Mac, Windows, and other Unix-like machines.

Firmware - Self-explanatory, the link points to the recommended cloud firmware builder for ease of use.

These were chosen because they work cross-platform for the most part. However, additional tools/options can be found here.

Assuming you have downloaded your firmware with any additional modules, run the code below to upload it to your microcontroller:

Esptool, depending on your version, will enumerate all available serial ports until it finds a connected device. As such, specifying the serial port should not be necessary in later releases- in theory.

Note: I had to run the command with sudo in order to access my serial port (which I hate to do to be honest). If yours works without sudo than feel free to omit.

Note Note: This is also assuming you have the esptool.py repository and the firmware in the same project root. Your paths may vary.

Note: Although it launches just fine without sudo, I noticed I still wasn’t able to establish a connection unless I launched it with sudo.

Once it’s launched, set the baud rate, next to the open connection button, to 115200 if it isn't set already (that’s what worked for me to open the connection after extensive troubleshooting and an obscure unresolved github issue). Once that's confirmed, connect your device and open a connection.

Lastly, copy and paste the following sample lua code into ESPlorer as a new file. Replace mySSID and myPassword with your own network credentials.

If you aren't familiar with lua, don't worry, I wasn't either- a lot of it is still trial and error. But experience is the best teacher so don't let that stop you! In short, the code above sets up a wifi station with our own custom event callbacks for when the device connects to the network specified, when it receives an ip address, and when it disconnects for whatever reason.

Once it receives an ip address, it sets up an http server where it will listen for any inbound connections on port 80 and return a simple message

When we finally click the Save as Init button and then the Save to ESP button, ESPlorer will upload the file and try to run it (you may have to hit the little reset button on the actual device if the button's are greyed out as that means a connection has not been fully established yet). Now, once it connects and gets and ip address go to http://ipaddress from a device on the same network to see if we can successfully connect to the device. 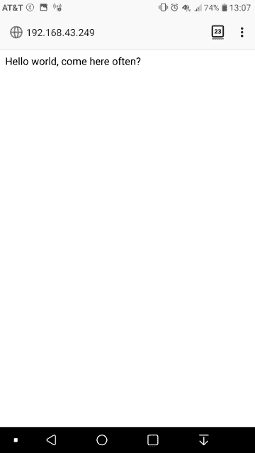 We did it team! Now we can play with the code and use it as a baseline for your next project. For example I’m using it to interact with GPIO pins and control my robots via wifi, and since I fried my first microcontroller trying to connect it to stepper motors, that'll probably be the next guide to save someone else the frustration. Regardless, the possibilities are near endless with the available firmware modules. What are you building with yours?

Feel free to ask any questions if anything needs clarifying! The modules documentation is definitely a useful resource as well. :)

Add analytics to NextJS with Plausible.io

Once suspended, bc7 will not be able to comment or publish posts until their suspension is removed.

Once unsuspended, bc7 will be able to comment and publish posts again.

Once unpublished, all posts by bc7 will become hidden and only accessible to themselves.

If bc7 is not suspended, they can still re-publish their posts from their dashboard.