I'd like to share a few of the curated PHP vulnerabilities recently been reported. They focus on the Laravel and Bagisto frameworks. 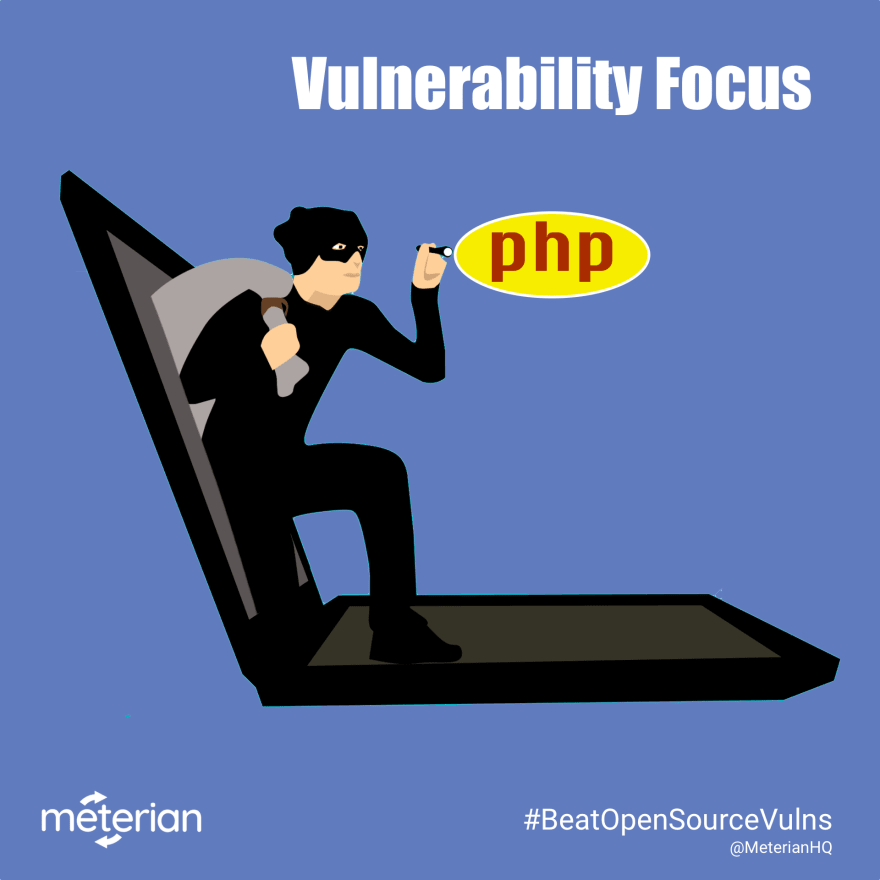 Attention to all PHP programmers! Read up, this is important stuff. On the 24/02/19, a vulnerability was found in the Illuminate component of Laravel Framework 5.7.x., a PHP development framework based on PHP 7.1.3. The severity of the threat is understood when seeing that 107,933 live websites use Laravel. It is also said to be the most popular web app category in the United Kingdom. This demonstrates the scale of potentially affected users, and why action needs to be taken quickly to avoid security flaws. 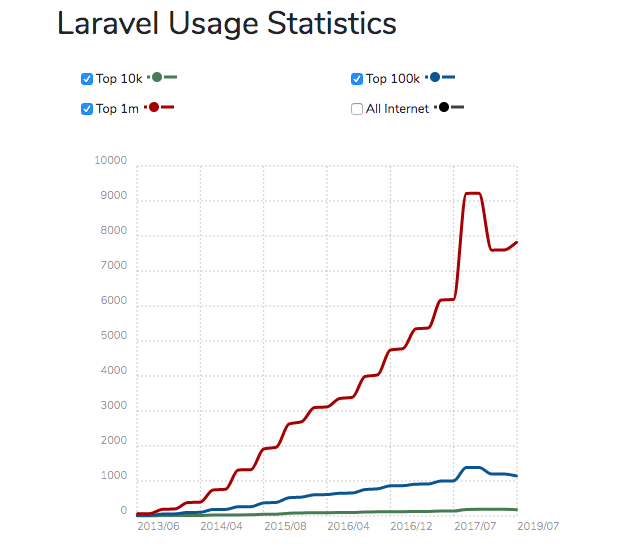 The vulnerability is related to the __destruct method of the PendingCommand class in PendingCommand.php. It is a deserialization RCE (Remote Code Execution) vulnerability originating from a laravel core package and has shown to be triggered as long as the deserialized content is controllable. The access vector was through the network.

So what is the threat? In regards to CWE-502, when developers place restrictions on ‘gadget chains’ and method invocations that can self-execute during the deserialization process, this can allow attackers to leverage them to make unauthorized actions. For example, generating a shell. Manipulation with an unknown input leads to a privilege escalation vulnerability (code execution). Therefore, this vulnerability could have a negative impact on confidentiality, integrity and availability. Even worse, an attack can be initiated remotely with no form of authentication needed for exploitation.

It is suggested to upgrade the laravel framework to version 5.7.27 or higher as soon as possible. So don’t waste any time! Or risk being vulnerable to potential cyber attacks!

Bagisto is a tailored e-commerce framework designed on some of the hottest open-source technologies such as Laravel, a PHP framework. It cuts down on the resources needed to deploy an e-commerce platform (i.e. building online stores or migrating from physical stores).

Alas, we regret to be the bearer of bad news. Version 0.1.5 of Bagisto has been found to contain a cross-site request forgery (CSRF) vulnerability which could result in client side manipulation that forces end users to execute unwarranted commands on a web application for which they are currently authenticated. It should be noted that this compromised version allows for CSRF attacks under certain conditions, such as admin Uniform Resource Identifiers (URIs). This CSRF vulnerability manipulates authenticated users’ browsers to send forged HTTP requests, including cookie sessions to exposed web applications.

Here is some background information on the nature of CSRF attacks. Unlike remote code execution or command injection attacks, CSRF attacks specifically target state-changing requests as opposed to misappropriation of restricted data. Nonetheless, unauthorised state-changing requests can be equally bad; with the help of social engineering tactics (i.e. sending unwarranted links via email or chat support), attackers may trick end users into executing unsanctioned commands of the attackers’ choice. A successful CSRF attack could lead to vexing situations whereby attackers coerce end users into performing fund transfers, email address changes, and so forth. Furthermore, CSRF attacks can go as far as compromising entire web application systems upon gaining access to an administrator account.

In this context, hackers can trick end users by sending requests (i.e phishing emails) to lure them to open and display some apparently innocuous content in a new tab on the browser, which in turn, prompts it to execute the hidden malicious script, than can operate on behalf of the user. 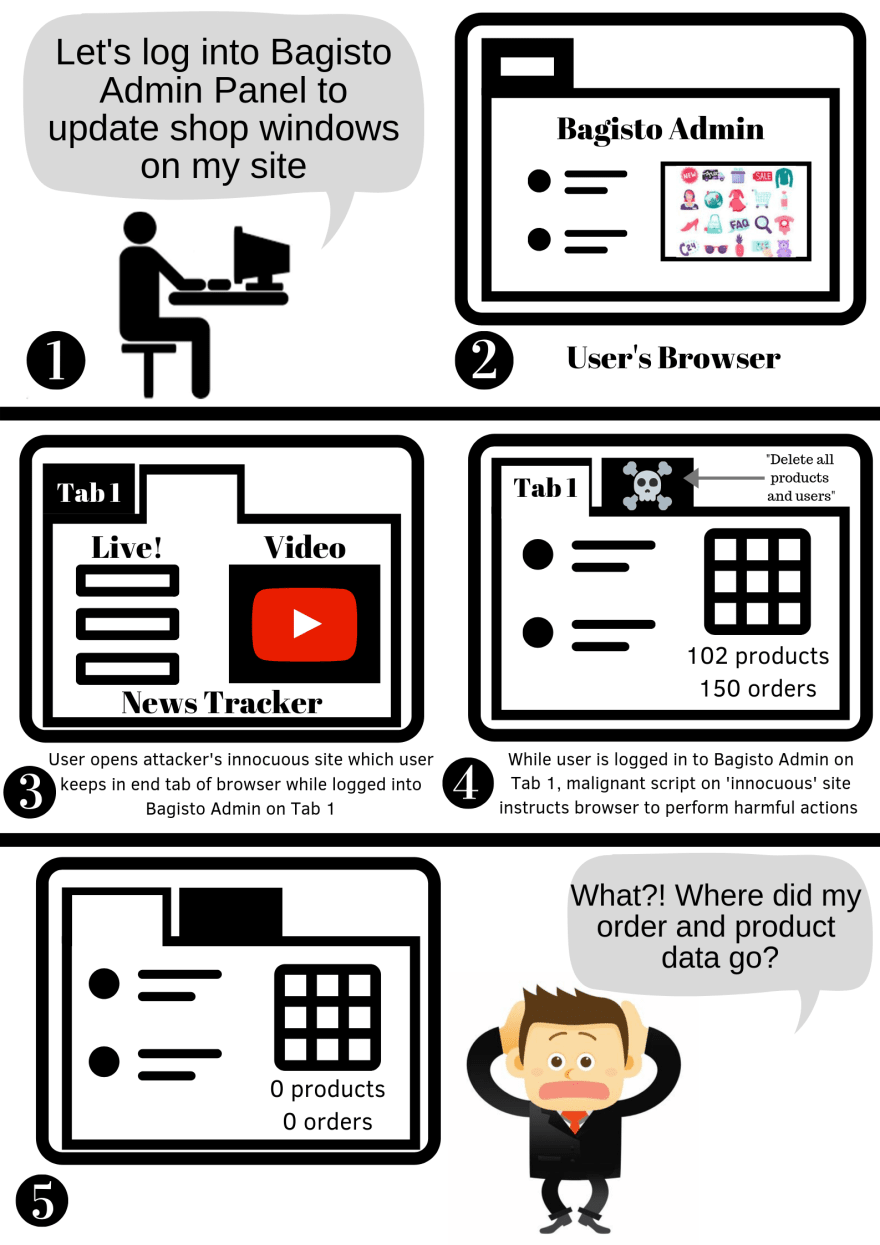 The graphic above illustrates the play-by-play on how attackers can exploit this vulnerability to perform CSRF and remove important functionalities, which could lead to denial of services and loss of data on an e-commerce platform.

In Step 1, the user first logs into the Bagisto admin page panel and subsequently accesses a seemingly innocuous website on another tab in the user’s browser. This website contains a malignant script (placed by the hacker), and the action of accessing this tab will lead to Step 3 where the script will be executed; the browser is instructed by said script to perform any possible harmful action on behalf of the user in Step 3. This course of user action culminates in Step 4 with the server executing the requested malicious actions, such as deleting data on the admin panel.

Nonetheless, affected users will be glad to know that all versions of Bagisto following v0.1.5 are untouched by this CSRF vulnerability. So, there you have it – update your application to the latest version of the Bagisto framework at the soonest to avoid further exposure!

Spread the word on these vulnerabilities and their fixes to help us improve application security all-around. In any case, you can certainly expect more engaging reads on PHP in the near future. Until then!

Knowing is half the battle, the other is doing.

Have you already fixed your code to avoid such vulnerabilities?
Please like this article if you found it useful.

For private code projects on any source code repository, give your project a spin on Meterian.

How to Upload Files onto the Decentralized Web Using Filebase!