Many cloud projects forget Network Engineers and Network Architects and only bring them in afterward. Often, when network guys are in, things are already complicated and there's not much time for them to learn AWS from scratch.

There are no prerequisites for AWS certifications anymore. So it's not mandatory to take the Associate certifications. I would still recommend taking at least the AWS Solutions Architect Associate or even the Cloud Practitioner certification if you're new to cloud computing. In addition to AWS certification, Aviatrix offers a free course which covers an Intro to Public Networking in AWS through ACE-Associate as you can see below 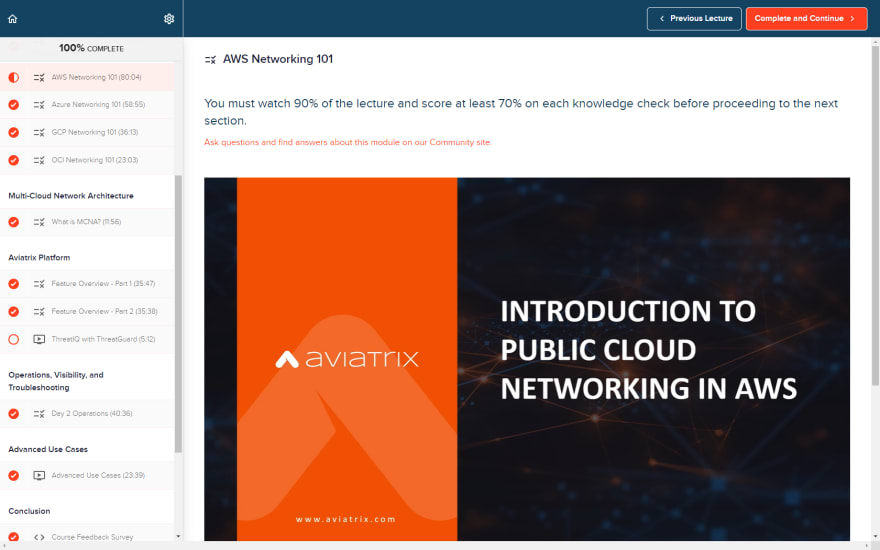 It's a good course on Cloud Networking whether or not you're considering Aviatrix. Here's the registration link and voucher code to make it free

To me, learning through practical experience or even parallel learning and building is the way I like to go. In this post, we'll learn and build networking constructs in AWS from scratch. Go ahead and create an AWS account or use an existing one if you want to follow along. If you're new to AWS, make sure to setup MFA to protect your account, see video below on how to setup MFA on your AWS account

We're going to use free resources as much as possible so you shouldn't be charged for anything. However, I'm not responsible for any charges you may incur. 🙂

VPC is the foundation of AWS networking. Think of it like a logical data center you're building inside AWS. Similar to on-prem, before you can run a server or storage inside a data centre, you'll need a network switch and at least a network/subnet/VLAN to connect them. We will build from UI - ClickOps style and we'll explore using IaC tools like CloudFormation template or Terraform in other posts. So let's create a VPC and a CIDR block, and in this example, we'll create a VPC called "first-vpc" and we'll use "10.1.0.0/16" as our CIDR block. While you can use any IPv4 ranges, it is recommended to use the RFC1918 ranges.

In this case, I'll be using Sydney (ap-southeast-2) region 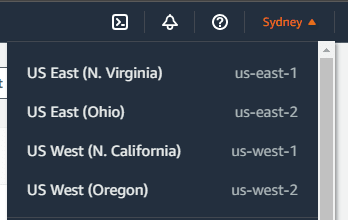 On the search bar, type VPC and click the VPC hyperlink - you can click the star to add VPC into the favorites list/bar.

If your using a new AWS account, you'll notice that there's an existing VPC also referred as the Default VPC which is an Internet connected VPC, more about default VPC is documented here: https://docs.aws.amazon.com/vpc/latest/userguide/default-vpc.html. While you can use this VPC to deploy AWS services, it is recommended to create a custom VPC. Default VPC is also considered as a high severity in tfsec, see this link: https://aquasecurity.github.io/tfsec/v1.8.0/checks/aws/vpc/no-default-vpc/. You can delete the default VPC if you're not planning to use it.

As we want to learn step by step and observe the components, choose the "VPC only" option, we'll use the "VPC and more" option later.
Enter "first-vpc" as the name tag and "10.1.0.0/16" as the IPv4 CIDR. The "10.1.0.0/16" will be the primary IPv4 block and you can add a secondary IPv4 block e.g., "100.64.0.0/16". The use case of secondary CIDR block could be because you're running out of IPs and need to add additional block, or there's a VPC with overlapping CIDR which you need to peer or connect. See this blog post on how a secondary CIDR block is being used in an overlapping IP scenario: https://aws.amazon.com/blogs/networking-and-content-delivery/how-to-solve-private-ip-exhaustion-with-private-nat-solution/ 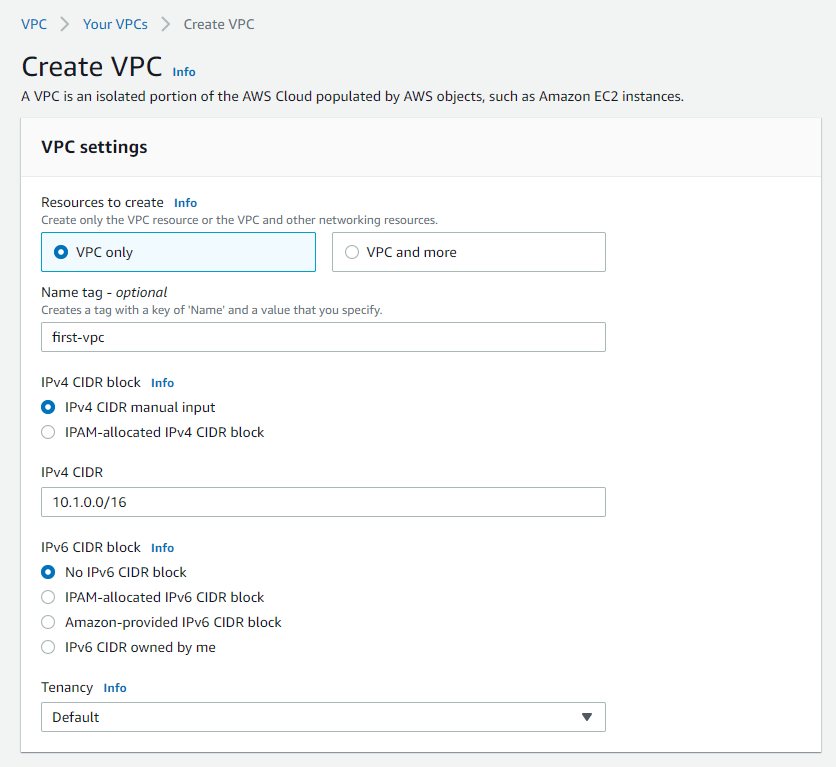 Leave the tags as default, you can add more tags if you want and click Create VPC

As soon as the VPC is created, it's assigned with a vpc-id and there's a route table created that serves as the main route table - rtb-0b9c6e04cb2764aad in below example.

Right click the rtb-id, open a new tab, and select the Routes tab to observe the configuration.

The route table has a default local route which is used for communication within the VPC. If there's multiple CIDR blocks (secondary VPC CIDR), then you will have local route for each CIDR block as below example

Now you have a VPC and a route table, but you won't be able to put anything inside. If you try to create an EC2 instance for example, you can't proceed as it requires subnets.

VPC can be created on a region basis, but a subnet where services run can only live in one availability zones (AZs). In order to offer services in multiple AZs, you'll need a subnet on each of them. For more details on regions and zones, check out this document:
https://docs.aws.amazon.com/AWSEC2/latest/UserGuide/using-regions-availability-zones.html
Let's create two subnets across two AZs as shown in below diagram (you can create more AZs if you want). The smallest subnet we can create is /28 with a total of 14 usable IP. 5 IP addresses are reserved by AWS as described in this document: https://docs.aws.amazon.com/vpc/latest/userguide/configure-subnets.html#subnet-sizing 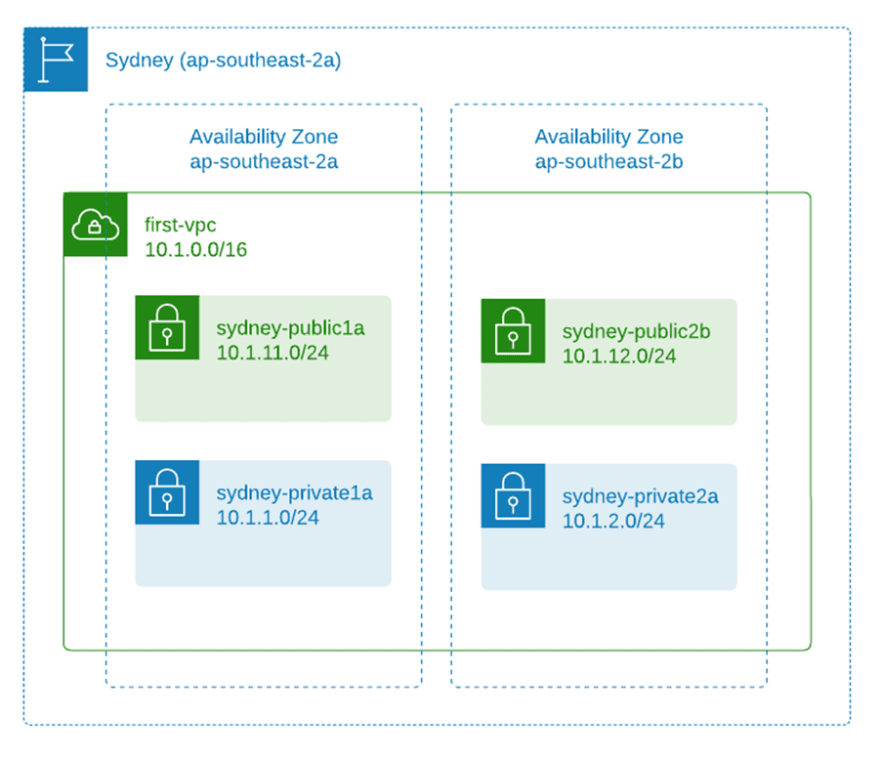 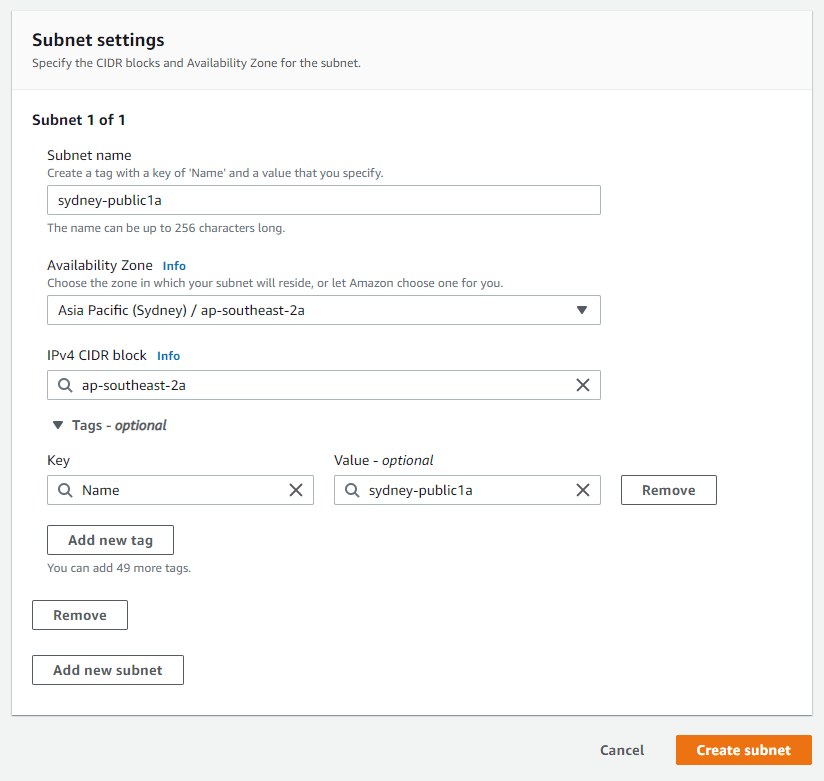 Once done, you should see all the subnets you just created on the console. If you missed any, just create a subnet and select your desired VPC. As of now, you can deploy EC2 instances into the VPC by selecting one of the subnets, but the public subnet doesn't have any Internet access at this stage. When you select a public subnet > route, you'll see it uses the main route table and only has the local route, no default route for Internet access. 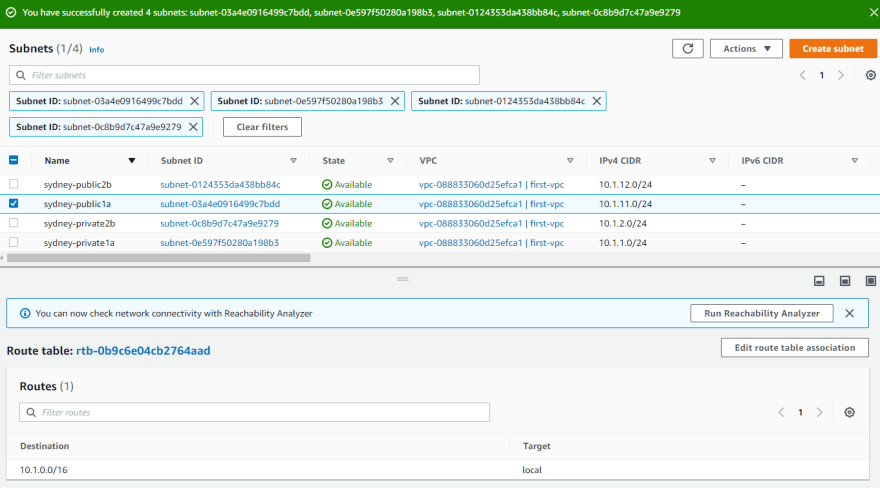 Technically, the subnets are still private. You'll need these to make it work as public subnets: 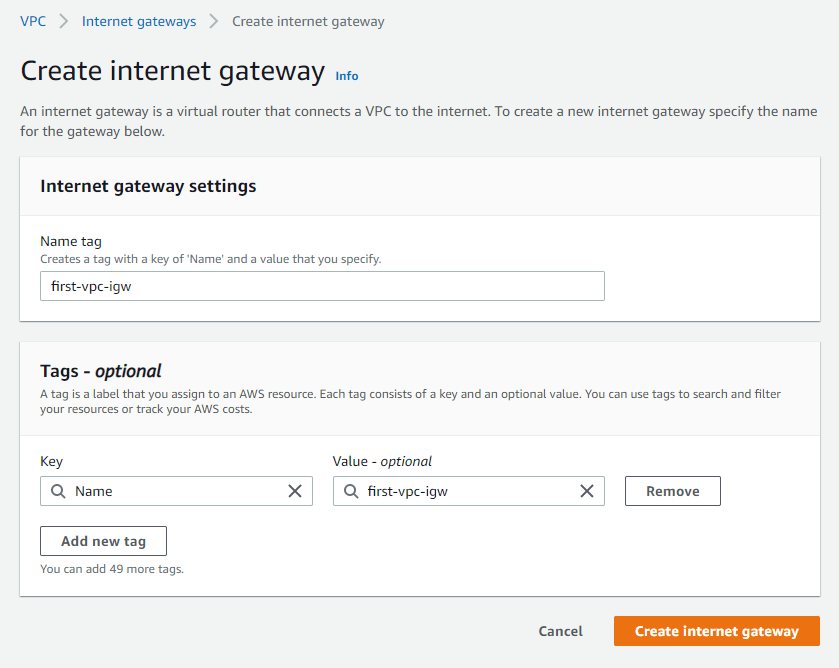 Attach the IGW to the first-vpc 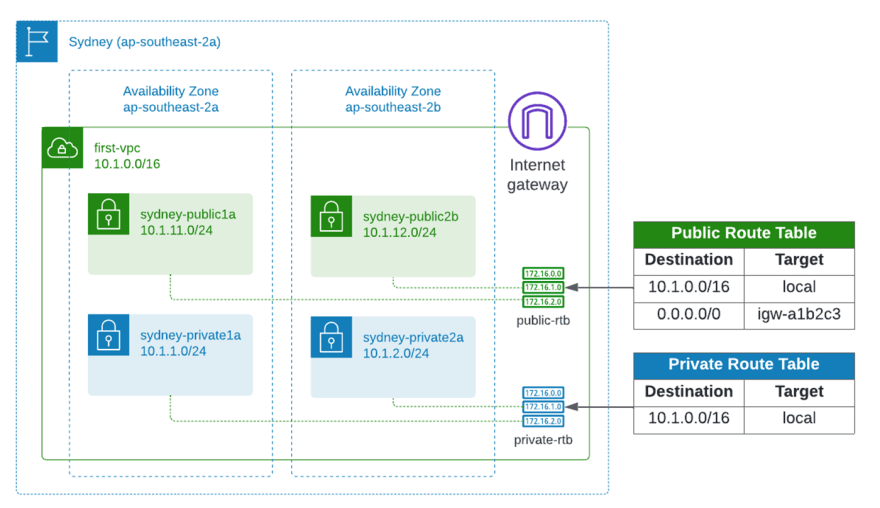 Put a name for the route table e.g., first-vpc-public-rtb and select the desired vpc - "first-vpc" 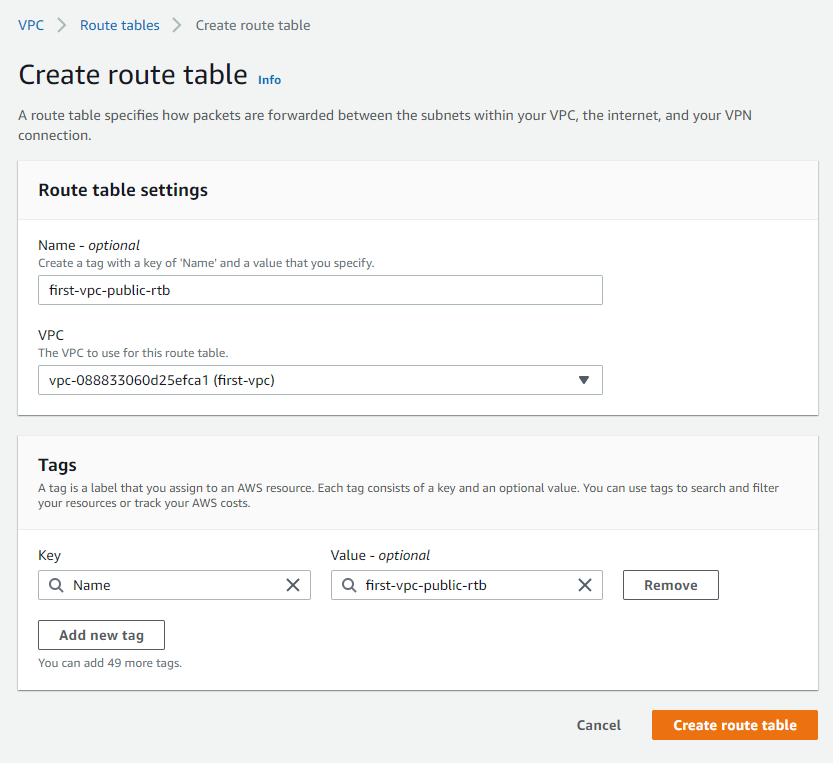 Once created, edit the route table, add a default route to the IGW

But let's create another VPC but now using the other option which will create required route tables and internet gateway for us. Create a New VPC and choose "VPC and more" this time

Hit "Create VPC" once completed, you can see that the wizard will create all of the required components similar to what we've created for the first-vpc. 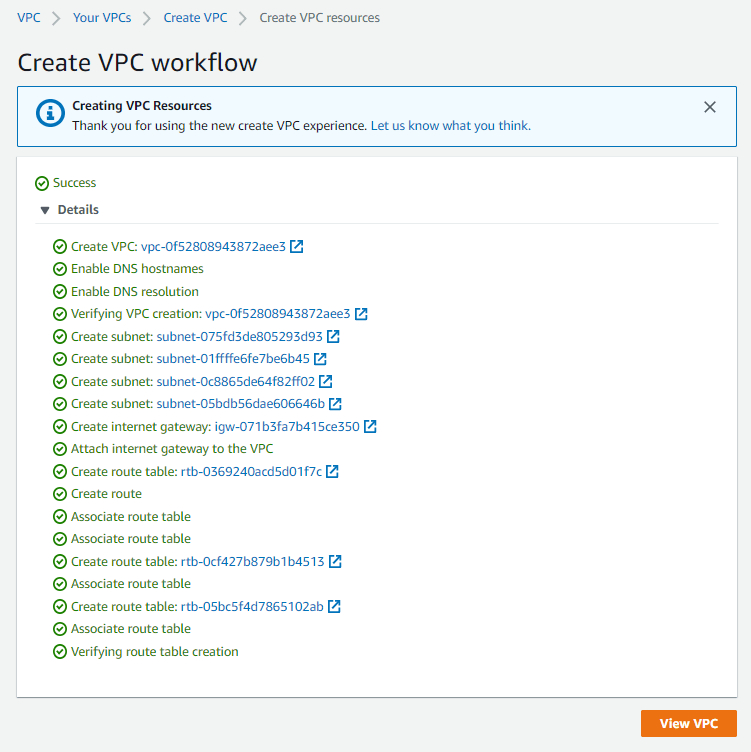 Now you have two VPCs and they are ready to take on workloads as shown in below diagram: 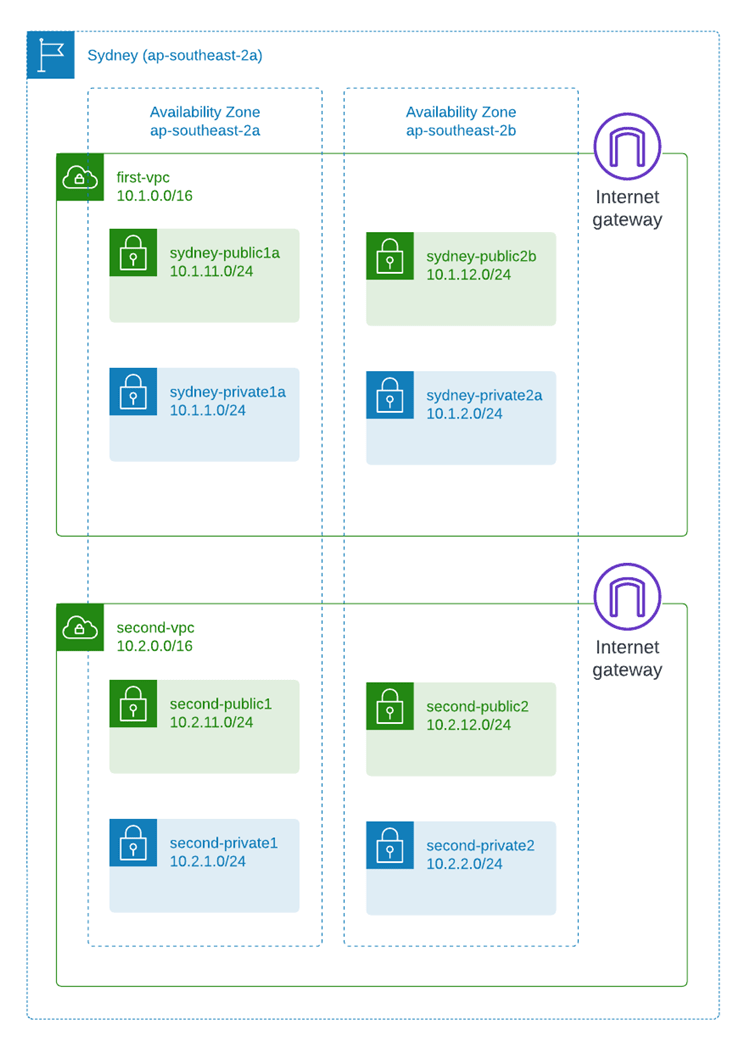 I hope this post helps you better understand AWS and cloud networking, especially some of the foundation of VPC networking. We haven't touched on security groups, NACL, how to give egress Internet access to the private subnets, how to connect VPCs, how to automate the build and manage the resources using IaC, I'll save that for future posts. Watch this space!

Once suspended, bayupw will not be able to comment or publish posts until their suspension is removed.

Once unsuspended, bayupw will be able to comment and publish posts again.

Once unpublished, all posts by bayupw will become hidden and only accessible to themselves.

If bayupw is not suspended, they can still re-publish their posts from their dashboard.

Once unpublished, this post will become invisible to the public and only accessible to Bayu Wibowo [Aviatrix].

Thanks for keeping DEV Community safe. Here is what you can do to flag bayupw:

Unflagging bayupw will restore default visibility to their posts.