DevOpsDays Houston 2019 was the first this city has done, but as my friend Angel said, "it felt like the fifth." and I have to agree. The event was extremely well put together and attended thanks to the incredible group of event organizers that volunteered their time. The DevOpsDays global community thrives on the work of volunteers. Listening to their story of starting with an idea and a $2000 gift from the Dallas DevOpsDays group was really wonderful. 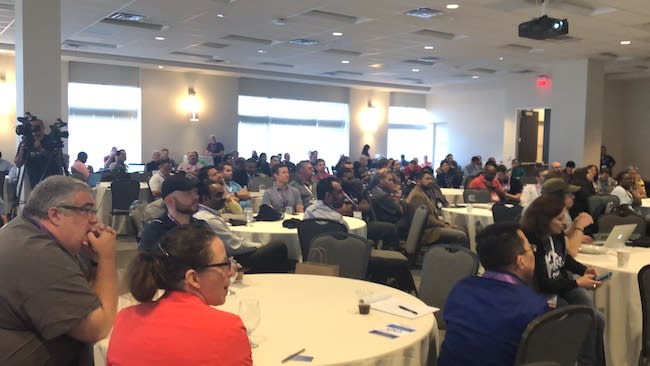 The event itself had about 200 people that came from the world of software engineering, operations or just wanted to learn what "DevOps" means. Microsoft's own Donovan Brown helped kick off the first day with his keynote where he reminded people that "DevOps is the union of people, process, and products to enable continuous delivery of value to our end users." I felt this really resonated with many of the attendees and speakers as I heard this referenced to several times as the conference continued. He provided the attendees with a look into Azure DevOps.

After Donovan a number of other great speakers from Houston and all over the country came to speak on DevOps related subjects. The most popular topic of all seemed to be the focus on containerization strategies. One of the better talks on it that stood out to me was the simple five-minute Ignite talk by JJ Asghar of IBM. JJ did a "everything you need to know" type of talk on Kuberentes that I felt would be something that could stand out to a person who may be new to Kubernetes but may be intimidated by the knowledge required one may need to get started. One of my favorite things people do at DevOpsDays gives simple explanations to complex problems or tools. Ignite talks can be great for this kind of "quick and dirty" way to share information.

I got a chance to do my own Ignite talk on operational preparedness that fit in well in Houston titled "Checklists: Good Enough for NASA? Good Enough for Your App!" In this talk I spend time discussing two stories that I really enjoy that always showed the value of checklists. One is of Troy Mann and how he always had to "Make list and check it twice" as he ensured during the shuttle program that all items that went along on shuttle launches were accounted for. My other story is of Van Halen and the "no brown M&Ms" rider (a contract of requests between the band and the promoter of the event) story. The story is about the 1982 Van Halen tour that was putting together one of the most complex stage shows in history. The checklist safety that Van Halen rider included was to not include brown M&Ms in the band's dressing room. Why? If you are responsible for thousands of wats of sound and dangerous pyrotechnics, shouldn't you read and follow every other instruction? The brown M&M represents a way to validate that the work in the checklist was being done properly.

Along with the talks at DevOpsDays there were great open spaces. Some of the subjects included migrations, discussion on test environments or just plain "how to describe DevOps to Grandparents." I love going to open spaces and I do my best to always propose and attend a few. I always enjoy the "rule of two feet" which means if you go to an open space that no longer interests you, use your two feet and find another that does. This creates great ways to share problems your team may be running into or ask questions about other's successes in implementing software and culture shift in their workplace. I ended up meeting a Developer Advocate who works for another major cloud provider. We found that we had more in common than not in how we thought about people should think about how to move to the cloud. I stated that I see the cloud as not a replacement for a datacenter, rather a new way to build Information Techology. DevOps helps you put this new way of using IT together with processes and culture ideas that enable teams to work together rather than shifting blame.

I got a chance to go to the sponsored happy hour after and spoke to more of the attendees. Really had a great time and appreciate the food and drinks that Datadog, MongoDB and Gitlab provided. These events depend on companies supporting the community, and thankfully DevOpsDays Houston was well sponsored.

The next day I had some early travel and did not get to see many of the talks, so the little time I did get to spend the next day I tried to talk with people. I met people from places like Rice University and Cheveron. Regardless of what they did at those places, all seemed to face many of the same challenges that I've heard at DevOpsDays events across the US. Common subjects like "we're still trying to train people on how to move off the mainframe" or "we overestimated in our lift-and-shift migration" were there as they are in Denver or NYC.

I will definitely do my best to attend this event in the future. Big shoutouts to Svetlana, Reggie, Mike and everyone else who worked on this event. You all showed them how Houston does the DevOps!

How we define and load configuration from files.