If you have Express APIs you are not alone. But have you ever considered shifting this server based API model to a serverless one? Stick with me and this by the end of this article you'll see how to do it and have a working example to try for yourself.

Update: Try everything you see in this article in this hands-on tutorial

I love Node and Express for creating APIs! However, these require a server and paying for that server in the cloud. Shifting to serverless alleviates the cost, the server upkeep, helps scale up and down easily, and reduces the surface area of the middleware required for a robust Express app. Is it perfect? No, of course not! But this is a solid option if these factors affect you. You'll learn how to shift your Node Express APIs to Serverless Functions in this article. 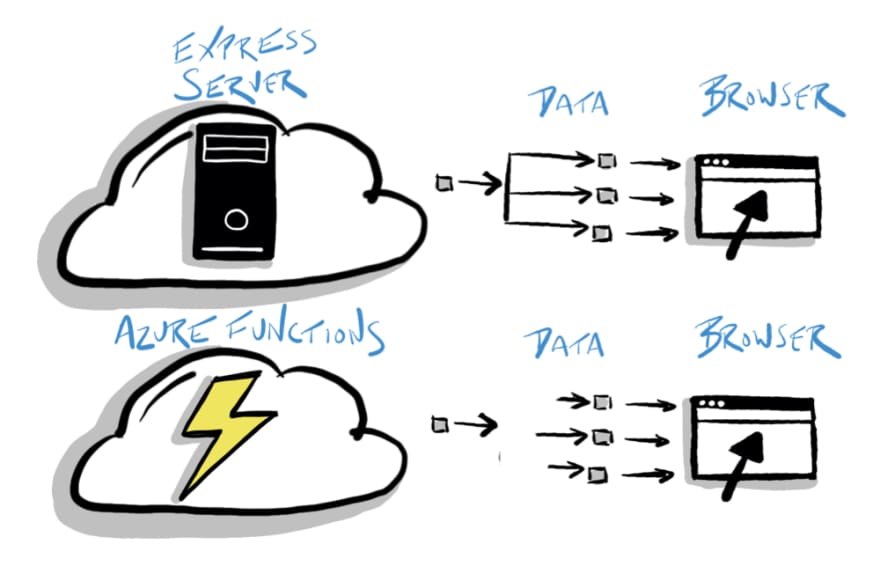 This article is part of #ServerlessSeptember. You'll find other helpful articles, detailed tutorials, and videos in this all-things-Serverless content collection. New articles are published every day in the month of September.

Find out more about how Microsoft Azure enables your Serverless functions at https://docs.microsoft.com/azure/azure-functions.

We'll start by exploring and running the Node and Express APIs in the sample project. Then we'll walk through creating an Azure Functions app followed by refactoring the Express routes and data calls to the Azure Functions app. Finally, we'll explore the results together. Through this you'll learn to:

While this article walks through the steps to shift your APIs from Express to Azure Functions, you can also follow along with the completed sample project on GitHub.

We'll walk through the code and the steps together, and at the end I share links to everything you need to get started and try this for yourself.

Planning the Shift to Serverless

Before shifting the app to serverless, let's think about why we might want to do this and what effort it might take to perform the shift.

First, the Express app requires a server which you must configure and maintain. It would be nice to alleviate some of this effort and cost.

Express apps often have a long list of middleware and logic to start the server. This sample project has a minimal amount of middleware, but you'd certainly want more in a production app with more concerns (ex: security) and features (ex: logging). While Azure Functions don't make this go away entirely, there is less logic and less code to start Azure Functions. Often there is very little code and some configuration. What does this mean in a concrete example? Well, for this sample app the server.ts file effectively goes away.

So why make this shift? Overall there is less to think about with serverless.

About the Sample Project

What's in the sample project on GitHub that you'll learn about in this article? Great question!

The project represents a simple Node Express APIs app in TypeScript that is shifted to Azure Functions.

The client app is Angular, however it could just as easily be Vue or React. The heroes and villains theme is used throughout the app.

While we will use an Angular app, one of the great things about Azure Functions is that you can run it locally on you computer, debug it, and call HTTP functions using tools like a browser, Postman, Insomnia (as shown below). 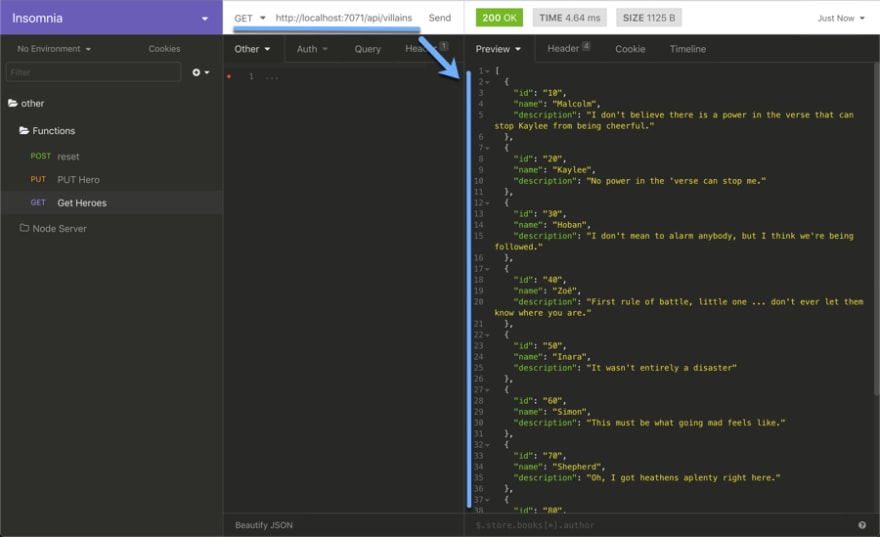 Let's start by getting the code and setting up the development environment. Follow these steps to prepare the code.

Environment Variables: Applications may have very important environment variables located in the root in .env file. This file is not checked into GitHub because it may contain sensitive information.

Now our code is ready for us to use it. But before we do, let's take a step back and see what we have.

This is a conventional Node and Express application that serves the following eight endpoints.

The structure of the Node Express app is straight-forward and contained in the server folder.

The entry point is the server/index.ts file which runs the server.ts code to start the Express server. Then the routes (such as /heroes) are then loaded from the /routes folder. These routes execute the appropriate code in the /services folder. The data.ts file is where the app defines the data store configuration.

For example, when the client app makes a HTTP GET to the /heroes route, the route executes the logic in the /services/hero.service.ts file to get the heroes.

Feel free to explore the code for the Express logic in the server folder on your own.

Here is a screen capture of the running application. 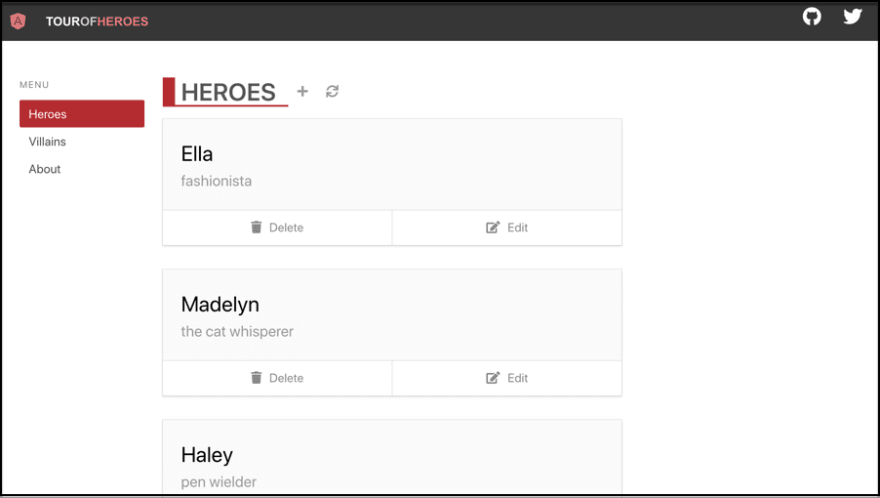 Run and Debug the Express App

When I want to become familiar with an app, I find it helpful to run and step through an app with the debugger. Let's do this together.

Let's start by opening the app in Visual Studio Code.

You may now set breakpoints in the Express and Angular code.

Here the debugger is stopped on a breakpoint in the Angular app. 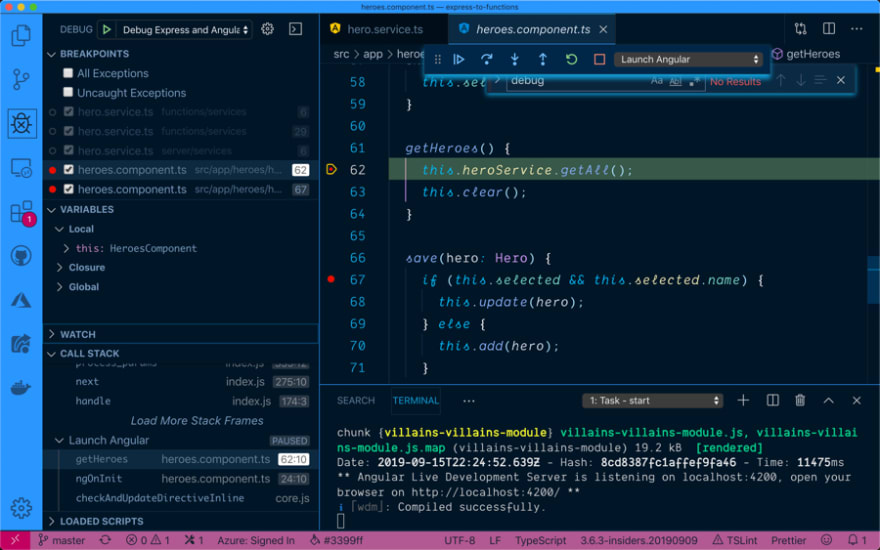 Here the debugger is stopped on a breakpoint in the Express app. 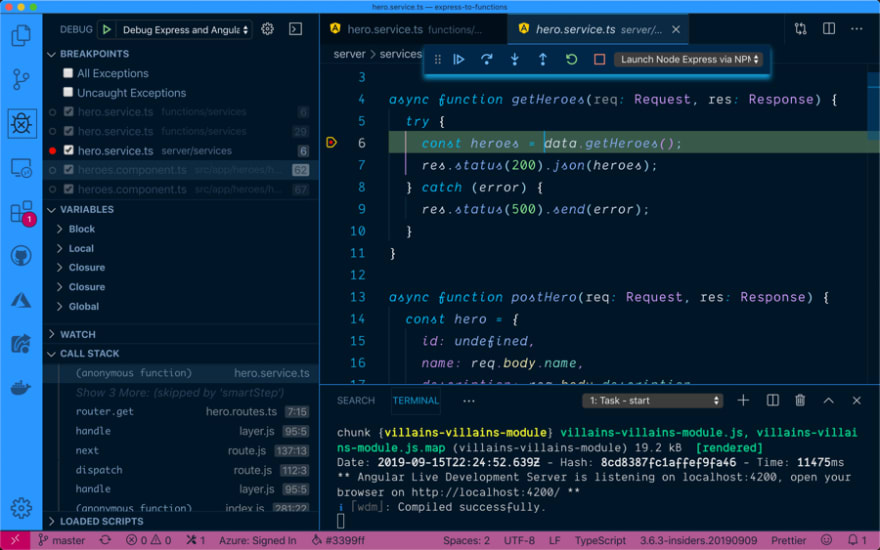 The files .vscode/launch.json and .vscode/tasks.json are integral to the debugging experience for this project. I encourage you to explore those files and copy/refactor their contents for your own purposes.

Now that we've run the app and explored where we started with Express, let's plan the shift from Express to serverless. I like to solve problems by breaking them down into smaller problems. In this case, et's start by breaking down the Node Express app can be broken down into its three main areas:

We'll take these one at a time as we make the shift for all of these. Let's start with shifting from the Express server to Azure Functions.

The Express server runs the API on a server. You can create an Azure Functions project to run the APIs instead. I recommend using the VS Code Extension for Azure Functions. Once installed, follow these steps to create the Azure Functions on your computer.

The Azure Functions app is what serves our routes.

You may recall that we have eight endpoints in the Express app. Follow these steps to create a function for the first of these endpoints. We'll come back and create the other seven endpoints soon.

By default the route to execute this function will be heroes-get. The route in the Express app is simply heroes. We want these to be the same, so add a route: "heroes" entry in the bindings section in the function.json. Now the function will be executed when an HTTP GET on /heroes is called.

The other important file here in the functions/heroes-get folder is index.ts. This file contains the logic that runs when the route is invoked. We already have all this logic from our Express app. We'll go get that next.

Data - Shift the Services to Serverless

All of the logic that executes to interact with the data store is contained in the server/services folder of the Express app. We can lift that code and shift it over to the Azure Functions app and make a few small adjustments. This may seem like it wouldn't work, but let's consider what is different about the Express app and the Azure Functions app. Here are some main differences in the services.

That is all we have to know. So armed with this information, it makes sense that we can copy the code for the services from the Express app to the Azure Functions app with minimal changes. Let's do this now.

Shift the Code from Express to Functions

Why write everything from scratch and throw away your hard work if you do not have to, right? Well, we can take the services code from our Express app and copy it to our Azure Functions app.

Now we have some minor refactoring to make the code work with Azure Functions instead of Express. The one thing that changes here is that the routing API and how request and response are passed. Let's refactor for this API difference.

Your code will look like the following when you are done refactoring. Notice the places that changed are commented.

There are four functions where request and response are parameters. One each for getHeroes, postHero, putHero, and deleteHero.

The parameters to every function in the Express app contain req and res. The Azure Functions app can still get to the request and response objects, but they are contained within a context object. We use destructuring to access them.

The Context object also contains other APIs, such as log (ex: context.log('hello')). This could be used in place of the common console.log you use in Node apps.

Now point your route to the service in your functions/heroes-get/index.ts file. Open that file and replace it with the following code.

The code that you add calls the asynchronous function heroService.getHeroes and passes in the context which contain the request and response objects.

Remember, there are eight total endpoints in the Express app and we just created the first one. Now, follow these steps to create an Azure Function for the rest of the endpoints.

Looking at the Functions App

The Azure Functions app now has folders that map to their appropriate endpoints as shown below.

The structure of the Azure Function app contained in the functions folder should look like the following.

Now it's time to run the app and see if it all works! We'll do this through the VS Code debugger.

You may now set breakpoints in the Functions and Angular code. 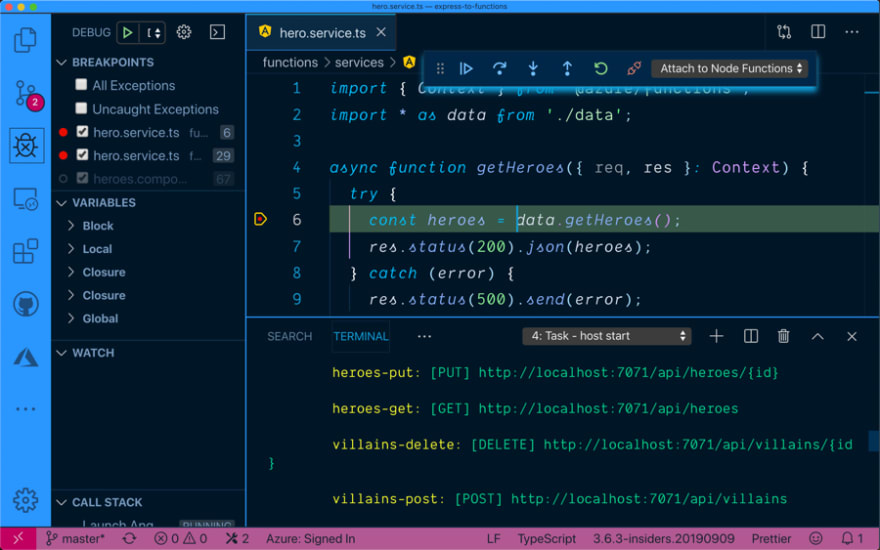 In case you missed it - the files .vscode/launch.json and .vscode/tasks.json are integral to the debugging experience for this project. I encourage you to explore those files and copy/refactor their contents for your own purposes.

At this point the Express app is no longer being used. Feel free to delete it (you can always re-clone the GitHub sample) or keep it around if you want to go back and froth between Express and Azure Functions.

The end result is we have Angular and Azure Functions. Now we can think about servers less (get it, because we are using serverless?).

Node and Express have been incredibly powerful and oft used for serving API endpoints. Now with serverless you could shift your APIs and not worry about server setup or maintenance, possibly reduce cost of an always on server, and replace the Express server with Azure Functions service. And for your efforts, you get an API that scales well and lets you focus on the code, not the servers.

The complete solution for the sample project is on GitHub here. The instructions on how to get started are also in the README file. You can explore running the Express app or the Azure Functions app to get a sense of the differences. Then try to apply this same shift to your code.

Here are a bunch of resources about the topics covered in this article.