According to the developers of denyhosts script, the script is intended to help thwart SSH server attacks on Linux systems. These attacks are sometimes referred to as dictionary based attacks or brute force attacks. This article will focus on how to install and configure denyhosts on Ubuntu 18.04 LTS.

Run the following command to install denyhosts on the your server:

Type y and press Enter. When asked, “Do you want to continue?”. After that, denyhosts should be installed on your server.

To configure denyhosts on your server, run the following command:

The configuration file should look like the image below: 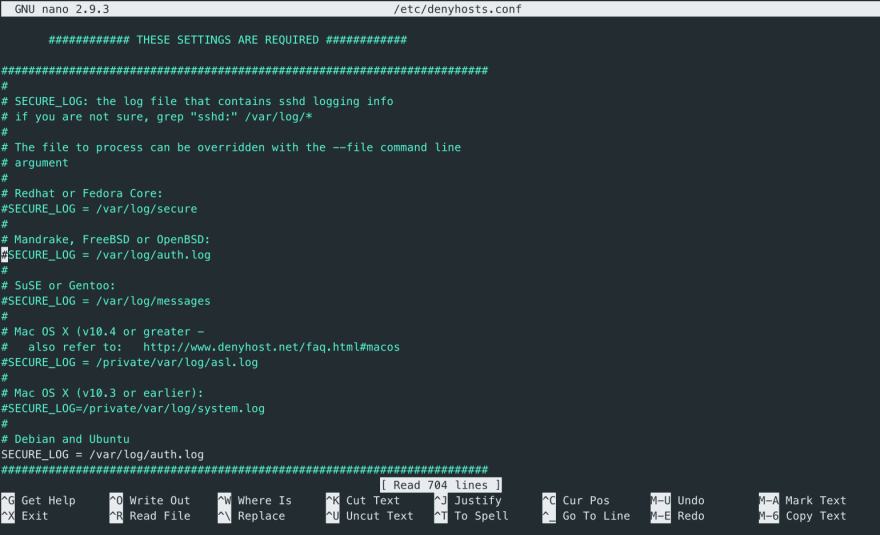 Now, know the meaning of each change we will be doing in the denyhosts configuration file.

The default value for DENY_THRESHOLD_INVALID is 5. Meaning someone can try to ssh into your server using a guessed username(s) that is a non-existing user account. However, the person can only try it 5 times. After that, the IP of the attacker gets appended the /etc/hosts.deny file. No one can ssh using the IP that has been added to the /etc/hosts.deny file unless that IP has been removed for the configuration.

DENY_THRESHOLD_VALID has a default value of 10. But this applies to only existing user accounts on the server. However, if an attempt to login with a valid user fails 10 times, the IP address attempting to establish a connection with the server will be added to the /etc/hosts.deny file.

DENY_THRESHOLD_VALID: block each host after the number of failed login attempts has exceeded this value. This value applies to valid user login attempts (eg. user accounts that exist in /etc/passwd) except for the “root” user

DENY_THRESHOLD_ROOT has a default value of 1. This applies to the invalid root login. Meaning you can only attempt to login via ssh once when it fails, the machine trying to establish a connection with the server’s IP will be added to the /etc/hosts.deny file.

DENY_THRESHOLD_ROOT: block each host after the number of failed login attempts has exceeded this value. This value applies to “root” user login attempts only.

AGE_RESET_VALID has a default value of 5 days. Meaning a failed login for an existing user will reset to 0 after 5 days. 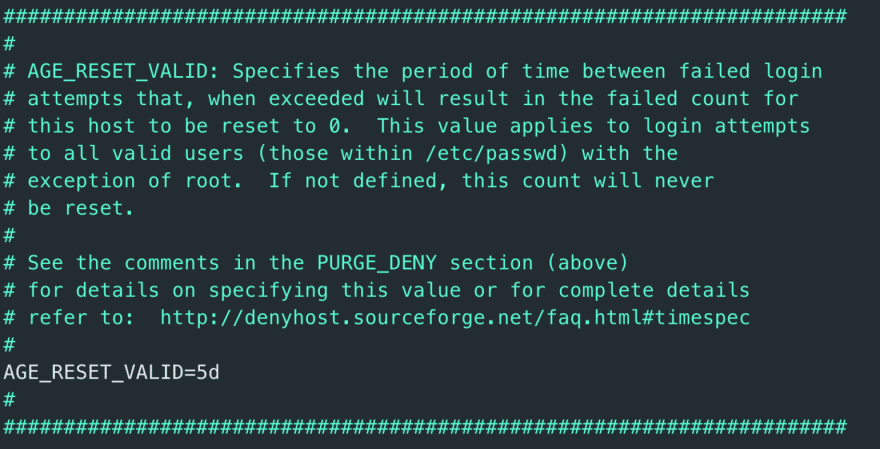 AGE_RESET_VALID: Specifies the period of time between failed login attempts that, when exceeded will result in the failed count for this host to be reset to 0.

AGE_RESET_ROOT has a default of 25 days. That is, a failed root login can only be reset to 0 after 25 days.

AGE_RESET_ROOT: Specifies the period of time between failed login attempts that, when exceeded will result in the failed count for this host to be reset to 0.

AGE_RESET_INVALID has a default of 10 days. Meaning a failed login for a non-existing user will reset to 0 after 10 days.

AGE_RESET_INVALID: Specifies the period of time between failed login attempts that, when exceeded will result in the failed count for this host to be reset to 0.
The configuration file has more options than you can explore. The configuration is also self-explanatory, just take your time and read about what each configuration setting is doing before customizing it. Good, we now have good knowledge on how to configure denyhosts using the above configuration settings.

Moreover, there are a few other configurations in order not to lock our clients and ourselves out of the server.

The reason for whitelisting our IP address and if possible that of our client machine is to let the system know that the IPs given in the whitelist are no threat to the system.

However, in order to add an IP address to the whitelist, edit the /etc/hosts.allow file with the following command:

Now, save and close the file.

Use the following commands to restart denyhosts service:

Moreover, we can enable system denyhosts at startup using the following command:

To list all IP addresses that have tried accessing the server via SSH run the command below:

However, denyhosts does not support IPv6.

After, save and close the file, then restart denyhosts with the following command:

In a situation where you need to stop or start denyhosts, the following commands might be helpful:

Finally, as the article points out, denyhosts makes it easier for us to control computers that try to connect to our server. Making administrative tasks easier. If you want to know more about how to secure your server, check the article Quick Tips to Harden SSH on Ubuntu.

I'm a Fullstack Developer and Blogger. I love trying new things and sharing them

Complete Guide to setting up your Application using Kubernetes Components