It’s necessary to understand the networking requirements and network traffic flows of the WorkSpaces service.

• The end-user device either running the Amazon WorkSpaces client or using Amazon WorkSpaces web access, uses the same two ports for connectivity to the service.
• The client uses HTTPS/TCP over port 443 and port 4172/TCP+UDP (PCoIP/WSP) for communications and network health checks.
• Traffic on both ports is encrypted.
• Port 443 traffic is used for authentication and session information and uses TLS for encrypting the traffic.
• Pixel streaming traffic, keystrokes, and pointer movements are encrypted using up to AES-256-bit encryption for communication between the client and eth0 of the WorkSpace, via the streaming gateway.
• Publish per-region IP ranges of our PCoIP/WSP streaming gateways and network health check endpoints.
• Outbound traffic on port 4172 can be limited from your corporate network to the AWS streaming gateway and network health check endpoints by allowing only outbound traffic on port 4172 to the specific AWS Regions.

After a connection is authenticated from a client device to a WorkSpace and streaming traffic (PCoIP/WSP) is initiated, your WorkSpaces client will display a Windows or Linux desktop that is connected to your VPC. Each WorkSpace’s primary elastic network interface, identified as eth1.

The high-level design for a VPC being used to host a WorkSpaces environment leverages a VPC in an AWS Region with at least two AZs. Within each AZ at least one subnet is created to provide the eth1 network connectivity to each WorkSpace. An example of applying segregation to different types of users is shown in Figure 1. 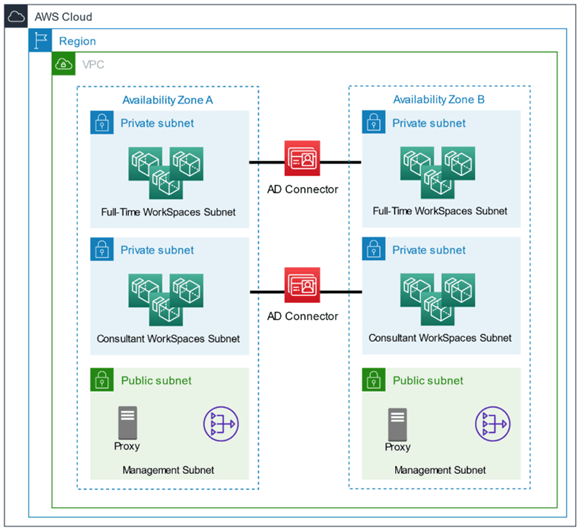 >>>>> Figure 1 – Full-Time vs Consultant WorkSpaces scenario <<<<<
It is recommended that network ACLs be used cautiously as they can have a significant impact on the operation of a WorkSpaces environment and it is important to note that network ACLs have no effect inside a subnet and only affect communication between subnets.
Figure 2, shows different security groups applied to each of the two sets of subnets hosting WorkSpaces, in this case trusted and the untrusted users. 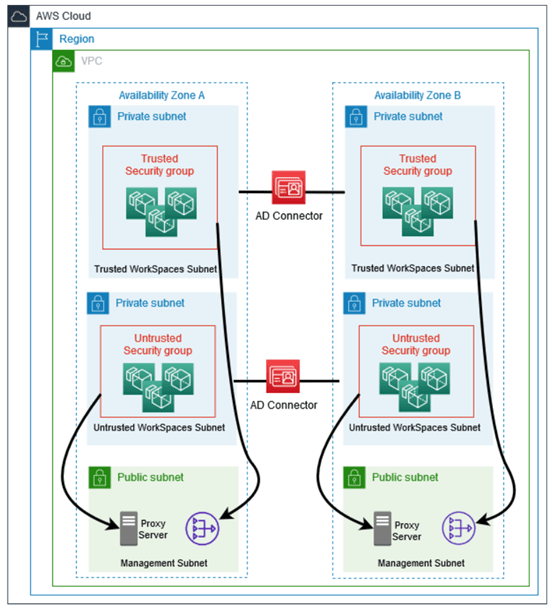 >>> Figure 2 – Trusted vs Untrusted users – Differing risk profiles satisfied by security groups <<<
It is possible to have multiple and overlapping security groups within the same subnet to apply granular controls. The default security group is associated with the directory being used with Amazon WorkSpaces and this is applied to a WorkSpace when provisioning through the AWS Management Console.

3.2 VPC design influenced by placement of infrastructure, data, or user

WorkSpaces should be located where the data they need can be accessed with relatively low network latency. Therefore, it is critical to consider the location of the resources and the physical placement of WorkSpaces alongside data wherever possible. Figure 3 shows an existing VPC that has already been implemented in AWS that hosts Active Directory Domain Controllers. 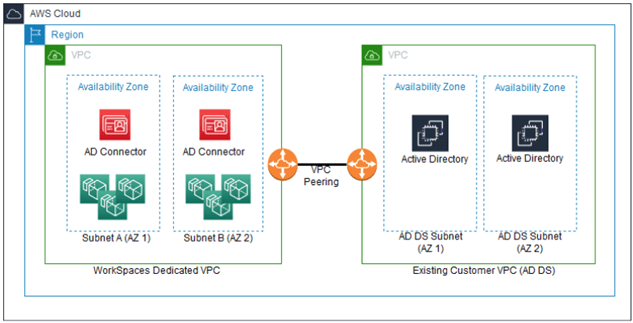 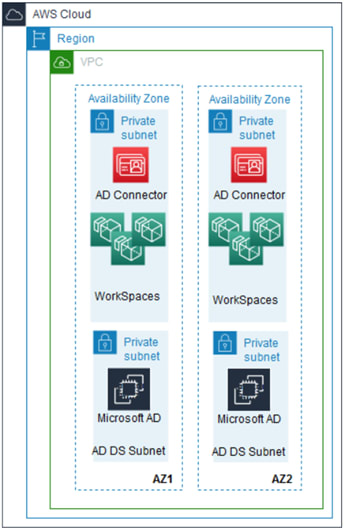 > Figure 4 – WorkSpaces and existing Active Directory in a common VPC <
The two previous VPC designs have been based on existing infrastructure already present in AWS. Figure 5 shows an existing on-premises network with Active Directory Domain Controllers and shared services connecting to a new WorkSpaces environment hosted in a VPC. The WorkSpaces VPC can provide internet connectivity through the use of an internet gateway. The VPC also ensures that AWS services that have VPC endpoints can be reached from the private WorkSpaces without the traffic having to traverse the internet. 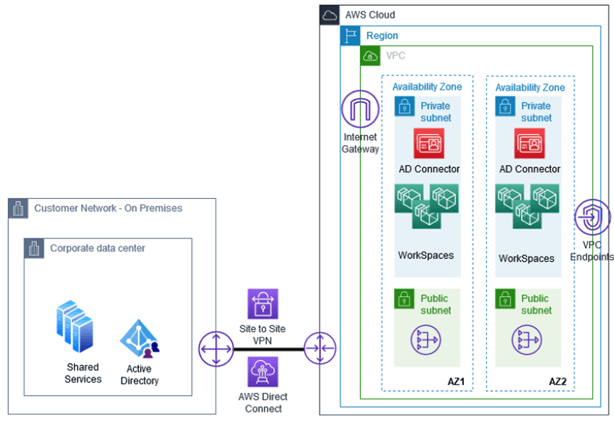 Figure 6 shows a multi-regional WorkSpaces environment across three AWS Regions, six AZs, and an existing on-premises network. This design satisfies a geographically dispersed user base since a user within a user base that spans multiple geographies can connect to their nearest WorkSpace Region. 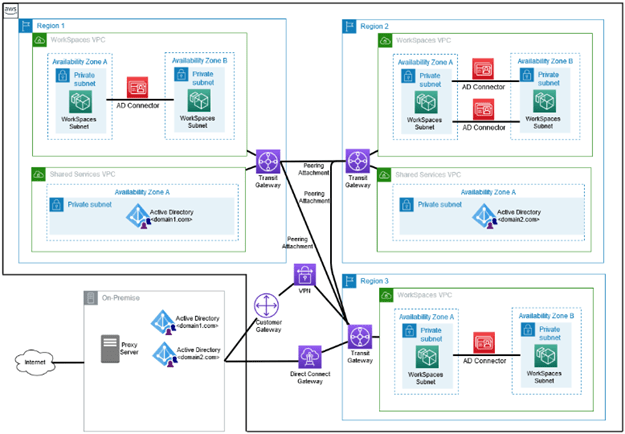 Figure 7 shows the streaming and authentication traffic flow for Amazon WorkSpaces. This diagram is useful to understand a full WorkSpaces environment that is being accessed by end-users and that also has connectivity to an existing on-premises network. 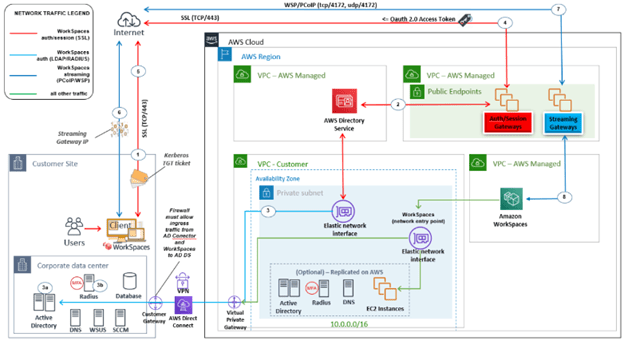 Internet connectivity can be provided to WorkSpaces in a variety of ways.
Internet gateway
An internet gateway is a horizontally scaled, redundant, and highly available VPC component that allows for communication between instances in your VPC and the internet. An internet gateway serves two purposes:
a. To provide a target in your VPC route tables for internet-routable traffic
b. To perform NAT for instances that have been assigned public IPv4 addresses.
When determining whether to provision an internet gateway for your WorkSpaces environment it should be determined whether there is an existing on-premises proxy that must be used. In some scenarios, it may be permissible for a new proxy service to be created in AWS to prevent all internet traffic flowing back to the on-premises network. In other scenarios a proxy server may not be required at all. Amazon WorkSpaces Design Considerations:
• Will users need access to browse the internet from AWS and not via the on-premises network?
• Will operating system patches and application updates need to be obtained directly via the internet using AWS internet connectivity or will they be provided using existing on-premises infrastructure?
If one or both of the answers to these questions is true, then an internet gateway will be required.
NAT Gateway
A NAT Gateway can be used to enable instances in a private subnet to connect to the internet or other AWS service, but prevent the internet from initiating a connection with those instances. Amazon WorkSpaces Design Considerations:
• When permitted by policy, use a NAT Gateway and do not use public subnets for WorkSpaces.
• A NAT Gateway can only be deployed in a public subnet.
• Each NAT Gateway is deployed in a specific Availability Zone.
• A NAT Gateway can simplify the provisioning of internet connectivity.
• Do not “Enable Internet Access” on your WorkSpaces directory when using a NAT Gateway.

The monitoring of the network infrastructure that underpins your WorkSpaces environment is critical to ensure that users are not being impacted when there is a degradation of service or potential impact to end users because of the loss of a network link.
Internet access monitoring
If existing on-premises internet proxies are employed within your design, then these should be monitored for availability and response times to ensure that users have a consistent experience. If a NAT Gateway has been employed as an alternative, then the AWS NAT Gateway provides both CloudWatch Alarms and Metrics.
Connectivity monitoring
General connectivity of your WorkSpaces environment to Amazon VPC networking components can be monitored by using VPC Flow Logs. In addition, Amazon CloudWatch Alarms and AWS CloudTrail Log Monitoring is available for AWS Direct Connect and Site-to-Site VPN connections back to your on-premises environment.

The WorkSpaces service also provides a native networking capability that can control access to the streaming interface (eth1) of your WorkSpaces environment from the internet.

Connecting a gif API on ReactJS without a backend

What is AWS Lambda?