1. The Architecture of a Universal Quantum Computer

Quantum computing is a new computing mode based on the mode of traditional Turing machine .And it is also an new method,which follows the laws of quantum mechanics ,to control quantum information units .A real quantum computer needs to meet five prerequisites :

When using Amazon Braket, customers can change quantum computing devices as needed without being limited to a certain hardware. The following is a brief introduction to the use process of Amazon Braket. 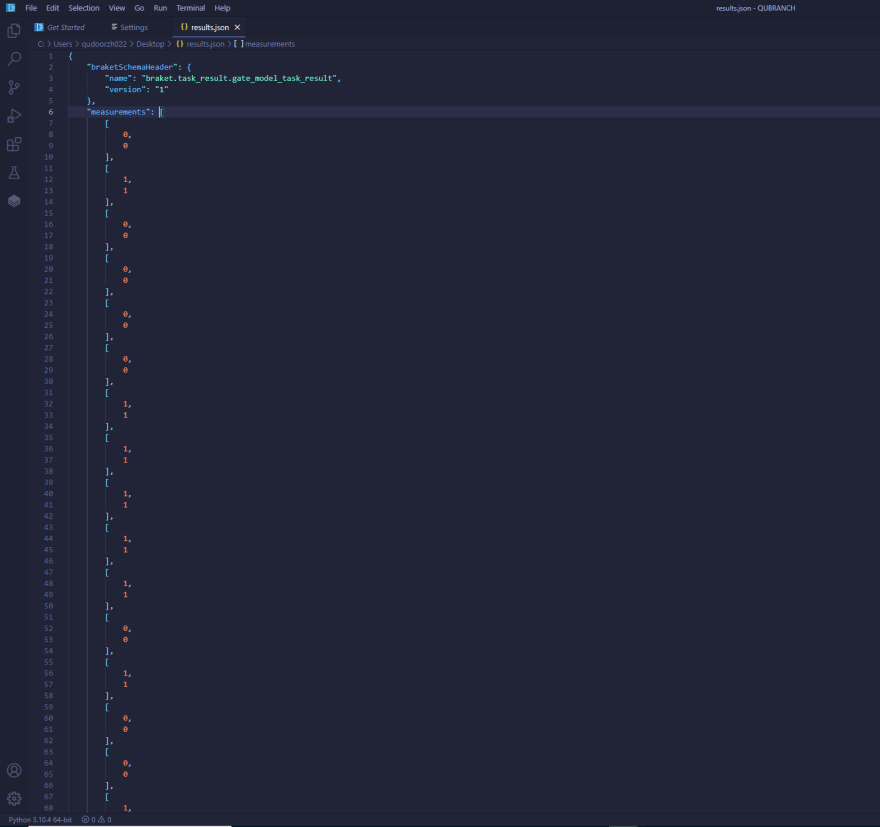 Picture2：This picture shows the part of measurement information when a task is completed. 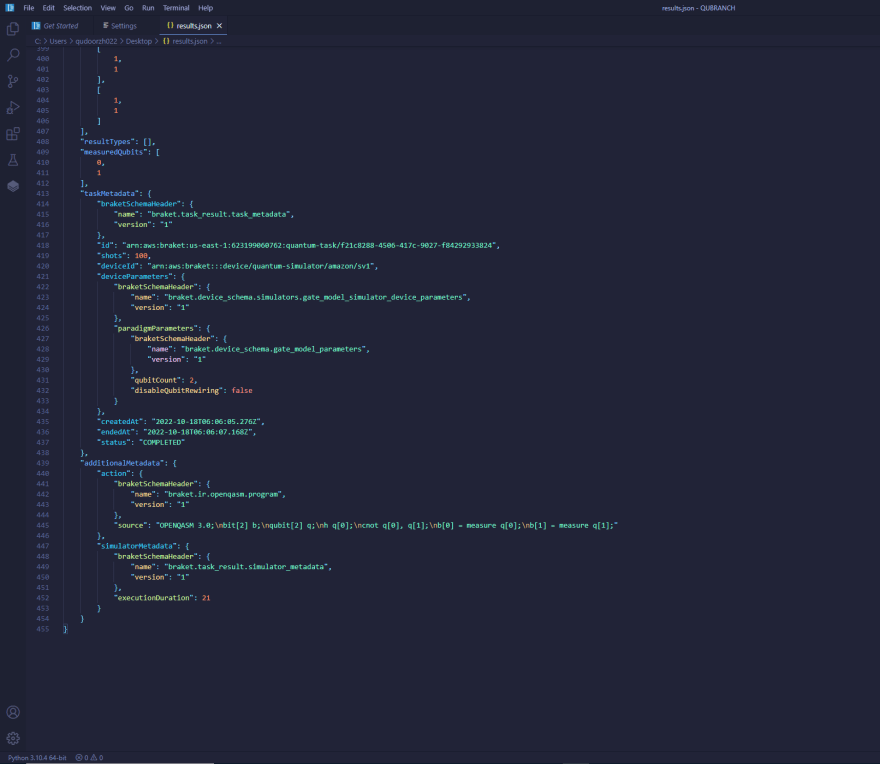 In general, if you want to try out a real quantum computer in Amazon Braket, you can use a quantum simulator for prototyping. Amazon Braket provides four kinds of simulators, namely local simulator, SV1, TN1, DM1. The local simulator can be used when our memory is large enough or for prototyping; SV1 for full state vector simulations up to 34 qubits, DM1 for simulating noise on circuits up to 16 qubits, or TN1 for simulating quantum circuits with higher local entanglement up to 50 qubits.

Unfortunately,Maybe until you read this paragraph, Amazon Braket has not yet connected to China's quantum computing software and hardware products. The AbaQ1 ion trap quantum computing adopts a distributed design to capture 20 fully linked ions per node. The platform can connect up to 8 computing nodes and will reach a link of more than 100 qubits at most.
As for quantum development software,Amazon Braket provides support for PennyLane, an open-source software framework built around the concept of quantum differentiable programming. This framework allows us to train quantum circuits in the same way that you would train a neural network to find solutions for computational problems in quantum chemistry, quantum machine learning, and optimization.The PennyLane library provides interfaces to familiar machine learning tools, including PyTorch and TensorFlow, to make training quantum circuits fast, easy and intuitive.
The PennyLane library is pre-installed in Amazon Braket notebooks. To access Amazon Braket devices from PennyLane, you need to execute the import pennylane as qml command to import the PennyLane library.
Setting up and running hybrid quantum algorithms with Amazon Braket is primarily using the Amazon Braket PennyLane plugin or the Amazon Braket Python SDK and instance notebook library. When there is no PennyLane plugin, we can use the SDK-based Amazon Braket to run some hybrid quantum algorithms .The open source quantum programming framework QuTrunk can running various quantum algorithms, such as Grover algorithm, Shor algorithm, VQE algorithm, etc., and will provide API of various mainstream machine learning frameworks to meet the development needs of quantum artificial intelligence .

Now,the company has joined the Baidu Technology Partner Program and aims to develop the technology of quantum and artificial intelligence . QuTrunk is the one which is a quantum framework providing API to paddlepaddle.PaddlePaddle is a framework with high attention in the people of Chinese developers.According to The report of Open Source in China in 2021,the score of paddlepaddle in github was the highest in China，and the issue and comment date reached 18979,ranking the first .

2.3 Technical Advantages of the Full Stack of Software

The software of the company have strong scalability, which can meet the diversified needs of quantum programming and research. Because there are sufficient and comprehensive interfaces in each layer of the quantum software, which can be used with a variety of AI frameworks to achieve some function such as quantum machine learning.

The software is independent of each other and can provide a variety of choices for quantum programming developers. The entire quantum software system of the company adopts a layered architecture, which can be decoupled into independent products, and can also be combined into new product systems, such as QuBranch+QuTrunk+QuBOX, QuBranch+QuTrunk+QuRoot.

Our Software is growing up in the ecological soil of quantum computing technology in China. Its industrialization is supported by national policies, and has great market potential in China. China's cloud service market has always been the core market for cloud manufacturers. As a new track in the world, quantum technology will also create a new development opportunity for the software industry. 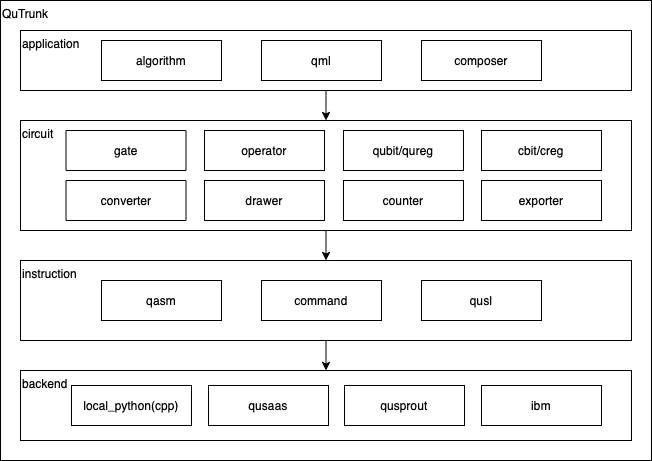 Amazon Braket now supports OpenQASM 3.0 for gate-based quantum devices and simulators.However,QuSL is a superset of OpenQASM 2.0, and has richer programming language.

With python's syntax characteristics, QuTrunk implement DSL (domain specific language) for quantum programs. We call the specific language for quantum programming QuSL (a quantum assembly language similar to OpenQASM). The main feature of QuSL is that a quantum gate operation is on the left of a linker * and the operating quantum bits is one the right of *, such as the : gate * qubits. This standard makes full use of the overloading feature of Python syntax on the * operator. The form is closer to the calculation formula of quantum physics. In addition, * can represent multiplication operation in computer programming language, and QuSL can represent that quantum gate operation on the left is actually matrix multiplication operation on qubits.

The quantum assembly written using the QuSL can be directly parsed and run in QuTrunk, without any lexical or grammatical parsing. Because of the feature, QuTrunk can seamlessly connect with QuBranch and directly generate quantum circuits based on the visual quantum programming function.In an other word QuTrunk can directly run the quantum circuits generated by QuBranch (just do some simple initialization work) without syntax compilation or translation processing.

3.3 Applications In The Financial Field—— QuFinace

Picture5:This picture shows the the function of time series prediction in QuFinace ,which is a quantum financial product.

aQuantum has recently launched the QuantumPath on AWS, offering graphical tools to develop and test algorithms services to integrate solutions with classical software, providing access to quantum computers and third-party solutions and development life cycle management that helps apply software engineering best practices. And AWS is enabling the development and deployment of quantum solutions on AWS. Therefore, if there is a corporation between the company and Amazon Web Services,the technical advantages of the company will enrich developer’s experience of programming on Amazon Braket. 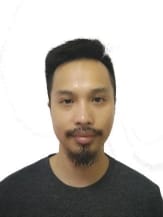 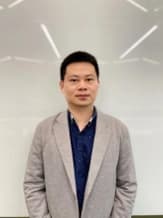 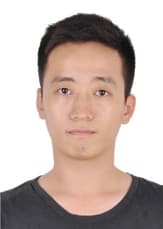 Once unpublished, this post will become invisible to the public and only accessible to YUE GUO.