Over the past few years, serverless architectures on AWS have converged upon multiple individual AWS Lambda functions, with each one implementing least privilege and responsible for one task (single responsibility principle). This is great from a security, testing and availability perspective, but meant duplicating boiler plate code in each function.

The next natural step was to look at middleware such as Middy to decorate the main business logic, and allow these tasks to be defined once and used consistently. I remember listening to a Comic Relief talk about their Lambda wrapper back in 2019. Since then, I was introduced by Yan Cui to DAZN Lambda Powertools, which was the inspiration for this new project.

These tools both used Middy, but provide an opinionated view on top of standards to be adopted. What I love about the AWS Lambda Powertools is this it allows a new project to be stood up, that conforms to the best practices as set out in the Serverless Lens of the Well Architected Framework. This is a view shared by many in AWS including Francessca Vasquez and Werner Vogels 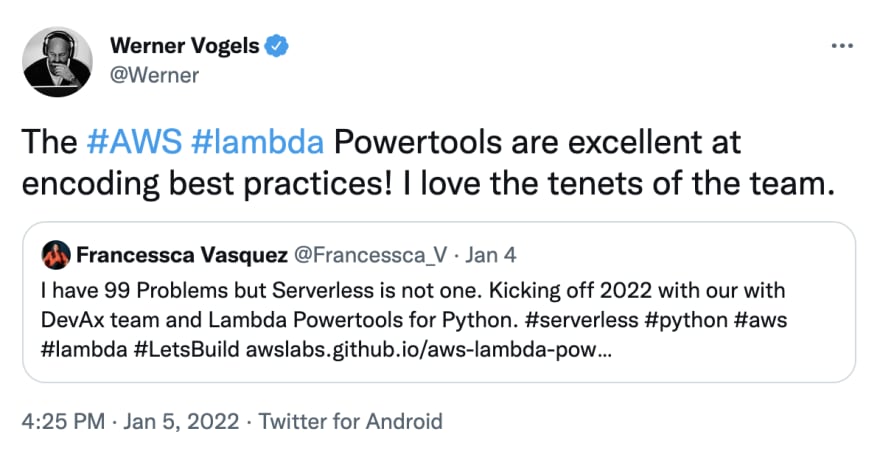 This initial release of the AWS Lambda Powertools Typescript provides features around:

My goal was to take an existing Nodejs serverless prototype, and implement these features to see what value I get out of them. To start with, I decided to use Middy middleware to provide some additional benefits.

This meant installing the core module

and wrapping the existing function handler in the middy() factory function

Now we were reading to start adding the new features.

The Logger provides an opinionated logger with output structures as JSON.

The first step was to install the library:

Each individual function then had a service name defined:

Each Lambda function was instrumented as follows:

The injectLambdaContext enriches the structured logs with key Lambda context information. This meant all my logs in CloudWatch used the following JSON format:

This is incredibly rich, and also meant I could use simple queries in CloudWatch Logs Insights such as

Tracer is an 'opinionated thin wrapper' around AWS X-Ray.

The first step again was to install the library:

Next, each Lambda function needs permission to send traces to X-Ray. I did this at the provider level in the serverless.yml file as follows:

The skeleton of each Lambda function is shown below. The tracer library requires a Service Name value, and this is the same setting used for the Logger. I used the captureLambdaHandler middleware. This has a number of benefits, including:

I also used the captureAWS methdod to patch all AWS SDK v2 clients which the demo uses.

In the AWS X-Ray service, you can look at the raw data. This shows the custom annotations created by the Tracer library.

This also means you can use a filter expression to filter the traces that are shown:

Clicking on one of the traces, you can see the trace map, which in this case traces from API Gateway to Lambda to QLDB. As we had filtered by cold start, the trace details also show the initialisation time for the Lambda function. 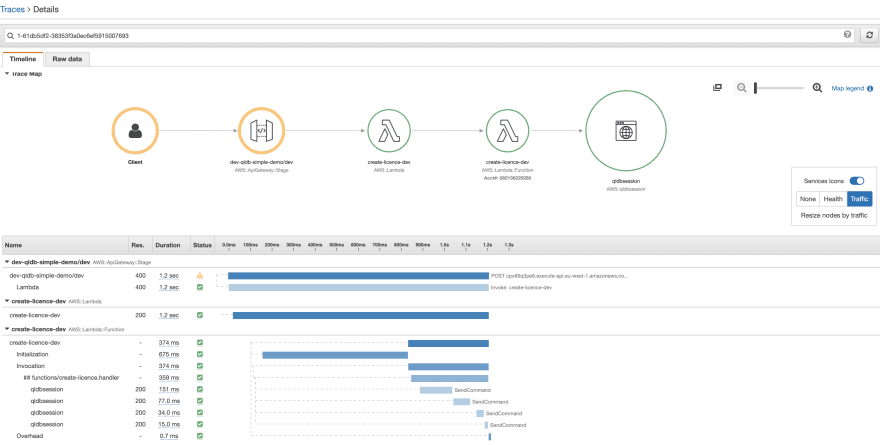 In the trace above, an HTTP 400 error is returned, as it was a duplicate request. This was returned using a custom response as opposed to throwing an error from the function, which would have been highlighted in red in the trace.

As the responses are returned as metadata, we can click into the metadata section of the function to see the actual response

This can be disabled if it might contain sensitive data.

Finally, it was time to capture some metrics, starting again by installing the library:

The Metrics library requires a Metrics Namespace and Service Name which were set as environment variables again.

The logMetrics middleware is useful as it will automatically flush any metrics created. It also supports a captureColdStartMetric param which is set to true. This allows you to keep cold start metrics separate from application metrics if needed.

To test it out, I added two simple metrics, which counted the number of successful and failed attempts to create a new licence:

All that was left was to send in a few requests, including several duplicate requests that would fail, and it was then simple to start graphing some of these metrics:

AWS Lambda Powertools for Typescript is an awesome new library for anyone that develops Lambda functions in JavaScript. With the experience and support of the developer experience team at AWS, you should definitely check it out, and I can see it being my go to library for bootstrapping all new serverless projects written in JavaScript. Hats off to the team that made the release possible, which includes Sara Gerion, Heitor Lessa, Florian Chazal, @ijemmy, Andrea Amorosi, Alan Churley, and Michael Bahr.

To try this out yourself, check out the backend folder in qldb simple demo on GitHub.