My session at re:Invent was "Drawing the New York City skyline with Amazon Aurora Serverless v2". I used marathon runners to test Amazon Rekognition. I will challenge participants on cycling the Tour de France in a workshop next month.

Load tests using JMeter and shopping patterns are more meaningful but often not powerful enough to explain a new concept. Absurd examples might do better and keep the audience focused, the risk is to take the game too far.

A couple of months ago I agreed on a talk with the tentative title "A Blue Tit, a Pigeon and Amazon Rekognition Streaming Video Events".

AWS added Streaming Video Events, a feature of Amazon Rekognition to provide real-time alerts on live video streams. My wife had recently added a birdhouse to feed a small passerine bird but a pigeon decided to claim the space. 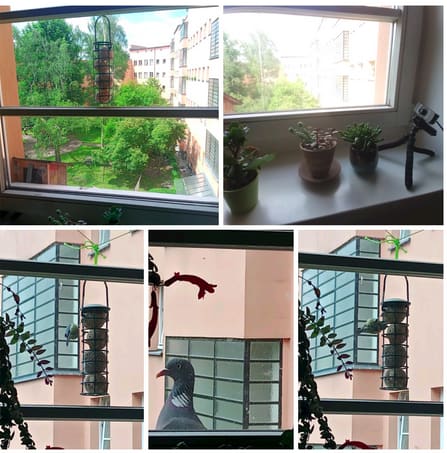 What better option to test the new AWS service and see if it would do better than a camera with built-in motion detectors? Can Streaming Video Events differentiate between the two birds and rescue the nest for the little blue tit? Could a notification trigger an audio alarm?

I did a quick test to demo real-time alerts on live video streams and I waited for the conference this autumn. The talk was approved and I was ready to collect some more real data. But while I was committed to the talk, the birds were not. Pretty soon the small passerine found a new home and the pigeon lost interest in the birdhouse too. I was so busy overthinking the presentation that I missed the obvious. I had no data.

A pigeon as a dependency is a silly mistake, others might be more subtle but equally challenging. Doing a demo at re:Invent on a service in preview had its own risks, you cannot assume it is going to be GA by the time of the conference. The capabilities might change significantly too. For example, the preview of Aurora Serverless v2 was for the MySQL 5.7-compatible edition, a version that never made it to GA.

Keep your idea and presentation simple. And don't feed the pigeons.

How to Run Playwright Test Cases In CI/CD Pipeline Bitbucket

Once unpublished, this post will become invisible to the public and only accessible to Renato Losio 💭💥.