AWS Lambda is the backbone of every serverless architecture.

While browsing endless serverless patterns, architectures and solutions available online, it's hard to find one without at least a single lambda function. Since its announcement in 2014, AWS Lambda has become a de-facto synonym for "serverless".

The promise of AWS Lambda is simple:

AWS Lambda is a serverless, event-driven compute service that lets you run code for virtually any type of application or backend service without provisioning or managing servers. You can trigger Lambda from over 200 AWS services and software as a service (SaaS) applications, and only pay for what you use.

Note the only pay for what you use part, which clearly indicates that we, the developers, have plenty of options when it comes to optimizing our Lambda functions in terms of latency, cost and sometimes both. This post aims to give you a quick overview of the most important configuration options/best practices and how to optimize your Lambda functions.

(And no, this post won't tell you to rewrite everything in Rust)

AWS has famously established that "security is job zero" when building its services. In software optimization, "measurements are job zero" (and that's why this tip is the 0th one).

When it comes to optimizing your Lambda functions, it's hugely important to measure first and optimize later. To quote "Serverless Architectures on AWS":

You can't optimize what you can't measure.

Before you start figuring out how to optimize the latency and cost of your serverless functions, you must have a consistent approach to monitoring necessary metrics and cost.

Understand the cost breakdown of your serverless application

Before spending weeks trying to squeeze that 0.1ms out of your Lambda function performance, figure out whether it's actually worth it. Saving 10 cents per month is not exactly worth it if for instance CloudWatch Logs are 95% of your AWS bill (which happens more often than you think).

While rewriting your entire production stack to Rust sure does sound fun, it may not be necessarily in the best interest of your project. If half of your bill is caused by unused EC2 instances, shut down those first before optimizing your Lambda functions.

Every service used in serverless applications emits a set of standard metrics that will help you understand the performance and availability of your system. Few AWS Lambda examples:

Small note on AWS Lambda limits, according to AWS docs:

As the name suggest, AWS X-Ray is excellent for performing an x-ray scan of what exactly is happening whenever your Lambda function gets executed. AWS X-Ray generated traces for a subset of requests that each of your Lambda function receives and presents you with a visual interface that allows developers to investigate which factores contributed e.g. to a slower than usual response time.

X-Ray trace data is retained for 30 days from the time it is recorded at no additional cost which allows you to investigate performance hiccups that happened e.g. two weeks ago.

Since X-Ray is not a free service, it's not enabled by default for every Lambda function in your account(s). Check X-Ray pricing page for reference.

Now that we've measured what we need to understand our performance bottlenecks, let's start optimizing.

The performance of a given Lambda function depends partially on the amount of CPU and memory allocated to it (partially, because e.g. a BogoSort will never be fast, no matter how much hardware you throw at it).

AWS does not allow you to independently scale the CPU and memory allocated to a given function, developers are instead given a single setting "Memory (MB)" setting. Apart from increasing the available RAM for a given function, this setting will also influence its cost per request (functions with more memory will be billed more per 1ms) and the CPU power proportional to increase in RAM.

As of December 1st, 2020 - AWS Lambda supports up to 10 GB of memory and 6 vCPU cores for Lambda Functions.

There's a tradeoff here - functions with larger memory size cost more per 1ms while at the same time are executed faster (which means that you get charged for less milliseconds of exeuction time). For every Lambda function there's a memory setting which allows you to get the best performance/cost optimization. While you can increment your function memory setting by 128MB and run some tests yourself there's a better solution - AWS Lambda Power Tuning.

AWS Lambda Power Tuning is a state machine powered by AWS Step Functions that helps you optimize your Lambda functions for cost and/or performance in a data-driven way. Basically, you can provide a Lambda function ARN as input and the state machine will invoke that function with multiple power configurations (from 128MB to 10GB, you decide which values). Then it will analyze all the execution logs and suggest you the best power configuration to minimize cost and/or maximize performance. 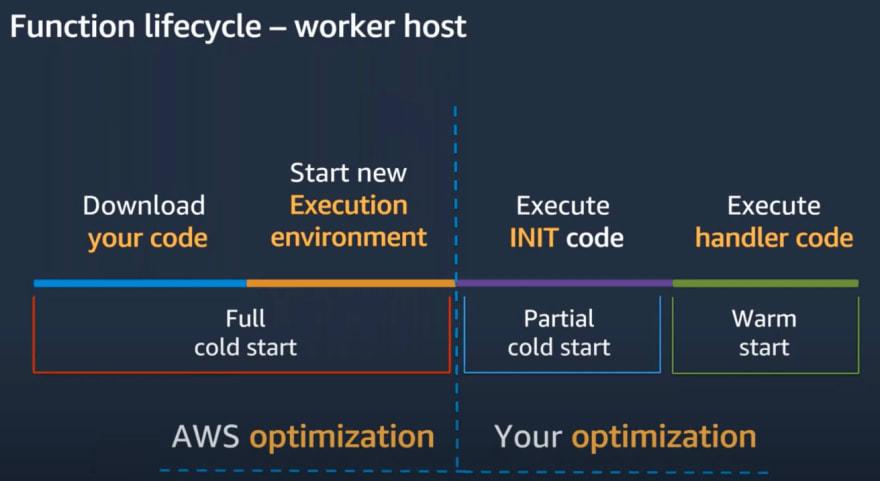 As shown above, a Lambda function lifecycle has several steps, some of those are optimized by AWS itself, and some can be optimized by developers using the service.

In order to optimize the time it takes to optimize downloading your code consider... shipping less of it. AWS Lambda has a limit of 250MB for the deployment artifact (so shipping your entire node_modules is out of the question) and in general - the less code you ship per a function, the faster it will be downloaded & executed during a full cold start.

Note on cold/warm starts: AWS does not publish the data on how long an environment is kept warm, but many developers agree it's for somewhere between 5 and 20 minutes. You can test it yourself by forcing a cold start (changing the Lambda function code or an environment variable will force AWS to discard the warm execution environment).

Avoiding so-called "Lambdalith" is a the best practice, building small functions which are focused on a single goal (e.g. deleteThing, createThing) is a better choice than a huge allMyBusinessLogic function, both in terms of cold start latency and maintenance.

The best practice is to carefully choose external dependencies for a Lambda function, removing everything that's not needed for the function to run. In addition to that avoid importing the whole aws-sdk in your function:

If you measure performance issues in a given Lambda function, perform an audit of its code. If you've avoided building a "Lambdalith", there shouldn't be too much code to read and at scale even the smallest 1% performance improvements can give noticeable improvements.

Optimize CPU-heavy algorithms used in a function, consider not fetching your entire DynamoDB table with Scan in order to fetch a single item (that's what Query is for), try to find a faster dependency that solves the same problem etc.

Once your "Uber for X" startup gets to scale, you'll need to consider how to scale your Lambda function.

By default there's a soft limit (which can be increased with a support ticket) of 1,000 concurrent invocations of all Lambda functions in a given account (yet another reason to use multiple AWS accounts in your organization, btw). In addition to that, there's an account-wide limit on the rate at which you can scale up your concurrent executions:

Luckily, since late 2019, AWS Lambda has a provisioned concurrency feature:

You might be thinking - why would I want to limit the maximum number of concurrent executions of a given function? Won't it get throttled at some point?

Yes, and that might be the desired behavior in some cases. Imagine that a Lambda function is calling a downstream legacy API that can only handle 10 requests at the same time. By setting a reserved concurrency of 10, you're making sure that even if your function is called more than 10 times, the downstream service won't be overloaded. While some requests may get throttled, it's better for a client to use an exponential backoff retry strategy than to make the legacy API explode (and inevitably wake up the poor soul on on-call duty).

The maximum timeout value you can configure for an AWS Lambda function is 15 minutes. While it might be tempting to always set a timeout of 15 minutes (e.g. to avoid timeout alerts), in my opinion it's not a good idea to do so.

In fact, in order to keep an eye on performance/latency issues, Lambda function timeouts should be rather conservative - if a given function should execute under a second than the configured timeout should reflect that.

Otherwise you may risk unnecessary costs - if a bug were introduced to your most-invoked function, bumping its duration to e.g. 5 minutes you wouldn't even notice due to its high timeout value (but you'll definitely notice the difference on your AWS bill). In addition to that, your UX will suffer since the user will be waiting for a long time for a response from your function.

That's why proper monitoring/alerting and conservative timeouts greatly help with providing the best latency for your clients.

In one of previous sections we've established that a Lambda function can use up to 6 vCPU cores and up to 10 GB of memory. At 1,769 MB, a function has the equivalent of one vCPU (one vCPU-second of credits per second), and above this value we get access to 2vCPU cores and more (depending on the memory setting).

What this boils down to is after crossing the threshold of ~2GB of memory, you can start using multi-threaded programming in your Lambda function to optimize its performance. This is of course easier said than done (and heavily depends on the programming language of choice as well as developer's skills), but is certainly an option. Optimizing work to be done in parallel on multiple vCPU cores will bring latency and cost of a function down.

It's not clear at which point Lambda function receives access to more than 2 vCPU cores. A AWS re:Invent 2020 Day 3: Optimizing Lambda Cost with Multi-Threading suggests that after crossing 3GB of memory a function receives 3 vCPU cores, 4 cores at ~5308MB, 5 cores at ~7077MB and 6 cores at ~8846MB. I was unable to find an official confirmation of those values published anywhere in AWS Lambda documentation.

Our friend, Wojciech Matuszewski published an entire post on this topic, which you are welcome to read here: Saving on AWS Lambda Amazon CloudWatch Logs costs

Stay on top of your logs. ⚡️ 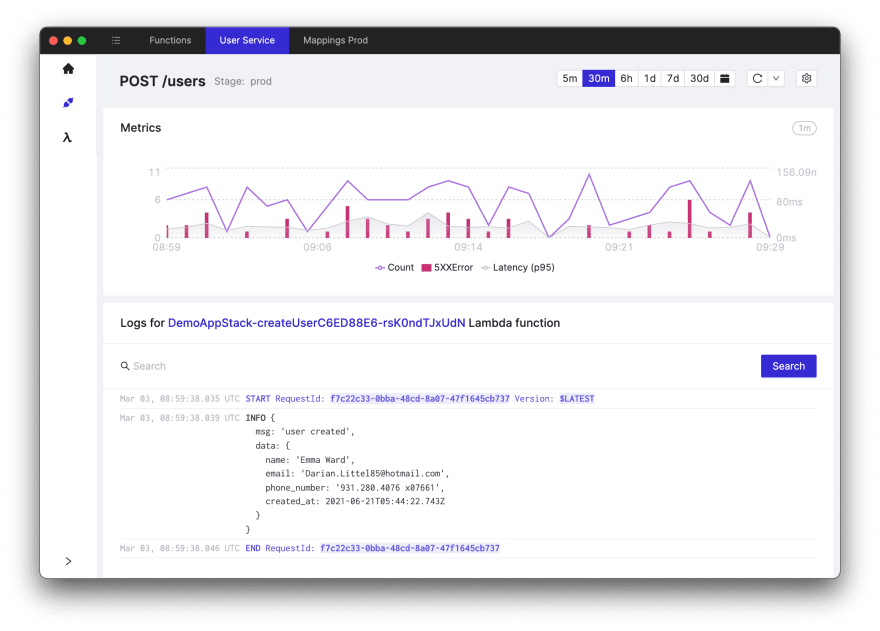 Did a production incident happen last week? Or 20 seconds ago? With Cloudash you can search, filter and browse your serverless logs and metrics effortlessly.

Search for whatever you want, whenever you want. Cloudash comes with built-in filtering capabilities enabling to get to the bottom of your problems faster than ever before.

What Are AWS CDK Constructs, Stacks and How To Use Them

Setup Gardener on AWS to Manage Kubernetes in Multi-Cloud