Provisioning infrastructure in the Cloud using code has been a best practice standard now for a couple of years now. Businesses and organizations now see the benefit of provisioning AWS resources compared to the manual approach in the AWS console.

From that point on there were two popular tools available that allowed you to define Cloud resources using a declarative approach such as AWS CloudFormation and Terraform.

However, the configuration of a declarative approach can be rather extensive and results in very large templates written in JSON or YAML that need to be maintained in order to keep your infrastructure as code up-to-date.

That’s where AWS CDK comes in to improve the workflow of developers and help them provision Cloud infrastructure using an imperative approach.

In this guide, you’ll learn what AWS CDK is, how you can use it to create your own infrastructure as code, and apply the best practices during development.

What is the AWS Cloud Development Kit (CDK)?

AWS CDK stands for Cloud Development Kit and is a framework developed by AWS that allows you to define and provision Cloud infrastructure in code and deploy it through AWS CloudFormation. 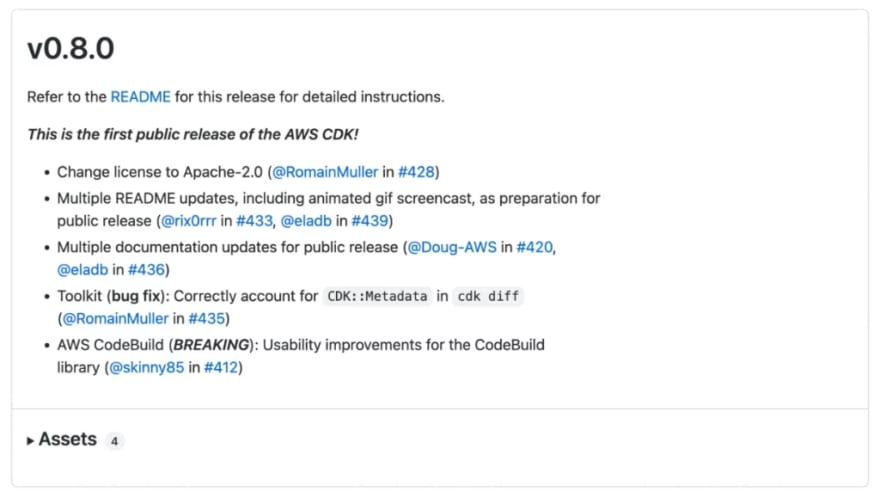 They made this project open-source so that it enabled the community to contribute to the code and directly pass on feedback to the official maintainers.

When AWS CDK became GA this meant that there wouldn’t be any breaking changes from that point on and it could safely be used for production workloads.

To simplify the concept of AWS CDK is that it consists of 3 major building blocks that allow you to customize the provisioning of your infrastructure: 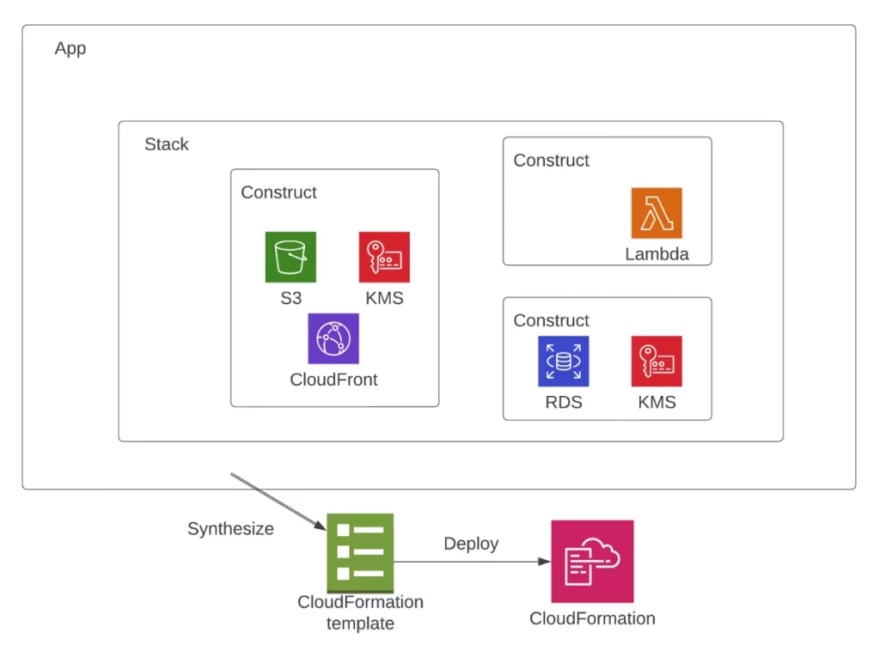 When an AWS CDK application is synthesized, the result is a cloud assembly, which contains the generated AWS CloudFormation templates for your stacks including the assets of your application. This package can then be deployed by the AWS CDK CLI to your preferred AWS account and region.

As you might’ve noticed in the previous diagram, you’ll see multiple constructs displayed within the stacks, each containing different AWS resources. These constructs are fundamental to the biggest benefit that AWS CDK provides to the developer.

There are 3 ways to build constructs in AWS CDK, each with its own unique features:

What are some of the features of AWS CDK?

The AWS CDK is a major step for developers to control and automate AWS infrastructure. Because it allowed you to develop AWS resources faster using your own development tools speed at which I can develop and iterate using CDK is significantly faster than using AWS CloudFormation alone. The ability to share and distribute AWS CloudFormation patterns using my company’s native software tools increases the consistency and standardization across all Intuit accounts. Even more importantly, AWS has made this project open source. This finally enables customers to directly contribute to and enhance the future of AWS CloudFormation.

When AWS CDK came out I saw a huge shift happening and a community gets formed where constructs were shared and people discuss new ideas and share their experiences.

Back in the days when I used CloudFormation, I haven’t seen such a community that focused on sharing CloudFormation templates for instance, other than code shared on GitHub.

From my own experience as a DevOps engineer having used both services extensively over the years, I would say that I prefer AWS CDK over AWS CloudFormation for the following reasons:

One of the AWS community members made a good point about what many would consider a unique selling point of AWS CDK:

“1500 lines of CloudFormation became 14 lines of CDK” It’s important to understand that the deployed application still has 1500 lines’ worth of operations and maintenance ownership, not 14

Therefore it’s a best practice to validate the output by tools such as cfn-lint and checkov to prevent misconfiguration of your infrastructure as code.

Having an abstraction such as AWS CDK can be great but only if you understand the underlying concepts. If you don’t know how CloudFormation works, it might be detrimental to your development cycle as you spend more time debugging and not understanding why things might not work.

How do I get started with AWS CDK?

To get started with AWS CDK you first need to install the AWS CDK toolkit on your machine, you use the node package manager in your terminal to install the package globally:

I’ve summed up a list of best practices that’ll help improve the way you develop using AWS CDK. These best practices focus on how you manage your code, environments, pipelines, and constructs.

For more best practices, check out the official documentation.

To help you speed up your development time and improve your code quality you need assistance in the form of tools. Here’s a list of tools that’ll help improve your workflow using AWS CDK:

In this article, you’ve learned what AWS CDK is and how it could improve your own development cycle. You’ve read how it stacks up against AWS CloudFormation and what the benefits and features are when you’re ready to adopt AWS CDK.

The best practices and tools that are shared will keep your code and infrastructure quality high without sacrificing the speed of delivery.

If you liked this and want to dive deeper. Then have a look at these AWS CDK examples that I’ve documented so you can build and deploy AWS CDK Constructs yourself and learn in a practical manner.

Once unpublished, this post will become invisible to the public and only accessible to Danny Steenman.