While helping folks work through our Serverless Stack guide, we noticed that most folks have a really hard time using CloudFormation templates to define their AWS infrastructure. And so it's no surprise that we are really excited about AWS CDK! It allows you to define any AWS infrastructure using modern programming languages. Making CDK, truly infrastructure as code.

The overlap between these two frameworks have led folks to write about why you should use one versus the other. However, we think they are meant to be used together, in tandem. And we've created a tool to do so — Serverless Stack Toolkit (SST). Allowing you to get the best of both worlds!

Let's look at this in detail.

Before we dive in, let's quickly get some background on these frameworks.

What is Serverless Framework

Serverless Framework was released back in October 2015. It allows you to develop Serverless applications locally and deploy them with ease. It's driven by a serverless.yml config file that looks something like this:

You can invoke your Lambda functions locally using:

And deploy them by:

Serverless Framework will automatically package your Lambda functions and upload them to AWS.

You can also add other AWS infrastructure using CloudFormation templates in YAML. For example, you can add a DynamoDB table using:

What is AWS CDK

AWS CDK (Cloud Development Kit) was released in Developer Preview back in August 2018. It allows you to use TypeScript, JavaScript, Java, .NET, and Python to create AWS infrastructure.

So for example, here is how a CloudFormation template for a DynamoDB table would compare to the CDK version:

It also allows you to create higher order constructs. This means that you can combine and compose lower level resources to create new reusable constructs.

Similar to Serverless Framework, you can deploy a CDK app using:

It also allows you to define Lambda functions as well.

However, it doesn't offer a great local development experience for your Lambda functions.

Using Serverless Framework and CDK together

To recap, here's how Serverless Framework and CDK compare.

So if you are building a Serverless application that includes other AWS infrastructure, it would make a ton of sense to use Serverless Framework for your Lambda functions and CDK for the rest.

As an aside, a similar design pattern of splitting up your Lambda functions from the other infrastructure is common in the Serverless community and we recommend it over on Serverless Stack as well.

However, there are a couple of design differences between the two that you need to be wary of.

Serverless apps are made up of multiple services and the app as a whole is deployed to the same environment. 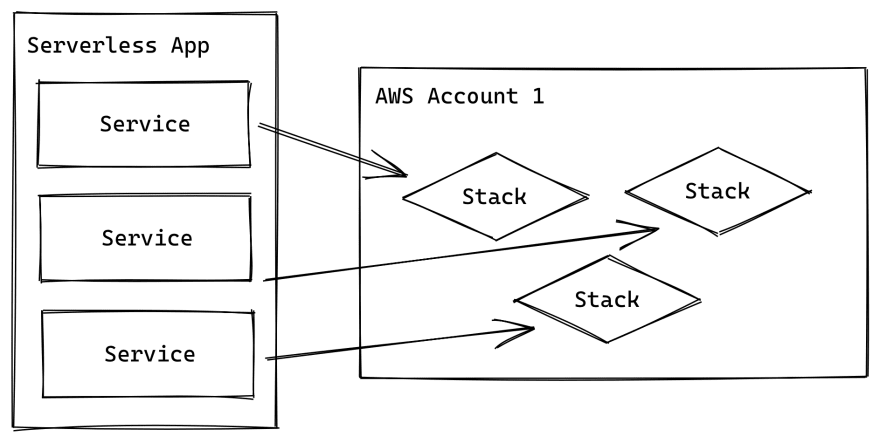 Each service is deployed as a CloudFormation stack to the target AWS account. You can specify a stage, region, and AWS profile to customize this.

The --stage option here prefixes your stack names with the stage name. So if you are deploying multiple stages to the same AWS account, the resource names will not thrash.

This allows you to easily deploy your Serverless app to multiple environments. Even if they are in the same AWS account. 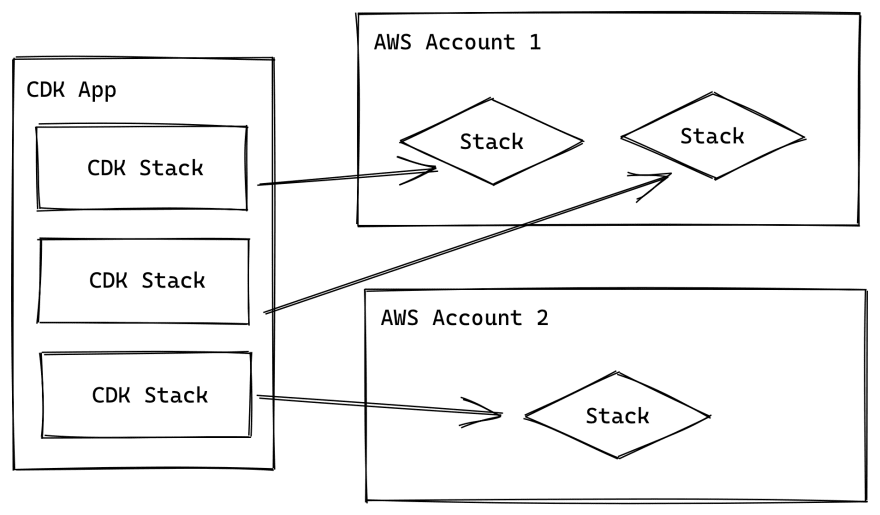 This means that each time you deploy your CDK app, it could potentially create a stack in multiple environments. This critical design difference prevents us from using CDK apps alongside our Serverless services.

You can fix this issue by following a certain convention in your CDK app, as outlined in this post — Deploy aws-cdk app to different environments. However, this is only effective if these conventions are enforced.

To fix this, we created the Serverless Stack Toolkit (SST).

SST allows you to follow the same conventions as Serverless Framework. This means that you can deploy your Lambda functions using:

And use CDK for the rest of your AWS infrastructure:

Note that, if you define the AWS account or region as a part of your CDK stack, like so:

You'll get an error.

SST also has a couple of other key advantages.

Differences between SST and CDK

SST is a simple extension of CDK with a couple of minor differences.

You can read more about moving a CDK app to SST here. So if you'd like to use SST but have an existing CDK app, you can do so by following a couple of easy steps.

How to ssh into ec2 instances easily!